A Catastrophe of Cacti

Some of my aeonium and succulent loving readers may be familiar with Holly Gate Cactus  nursery in West Sussex  - it holds a huge collection of cacti and succulents built up over 40 years and housed in a large glasshouse and sells a variety of smaller versions of these in it's shop.   A couple of weeks ago the Socks, in search of unusual aeoniums to replace the winter losses, decide to pay them a visit.  Worryingly, the brown visitor attraction road signs for Holly Gate Cactus had been painted over and driving up to the glass houses the area, never pristine,  looked even more decayed and overgrown than usual.

A lady greeted us and explained that they weren't really open any more and that the winter snow had broken through many of the glass roof panes rendering the area  unsafe.  Undeterred the Socks wandered around the glasshouse with the plants for sale but there was little there of interest. We had never visited the large glasshouse housing the cactus collection and although this area was now closed off the Socks were curious to see how it was faring.  The lady owner agreed saying we could wander around if we were careful  and that if there was anything we wanted she was selling everything she could off and would dig stuff up for us. 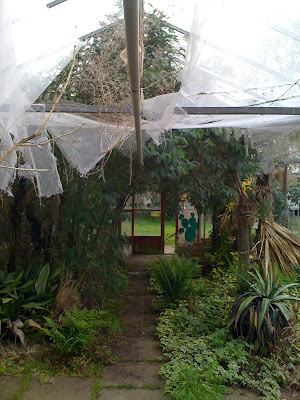 A forlorn and astonishing sight greeted us as we entered what had once been a fabulous and unique collection of over 30,000 exotic plants was now a neglected, overgrown, decaying  cactus cemetery! What had once boasted "rare plants from the more arid areas of the world, USA, Mexico, South America and Africa as well as sub-tropical epiphytic cactic from the Central and Southern American jungles"  was now a scene of death and dereliction. 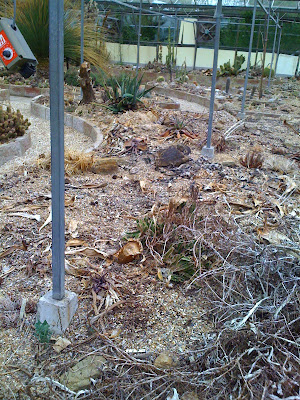 But not all of it!! In between the dried out carcasses of cacti there was life or half life calling out to be saved! 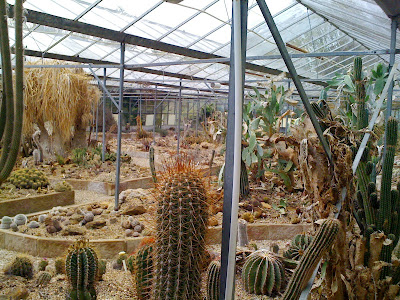 Some of the larger specimens,  like the once magnificent beast below, had been bought low but had somehow still survived the broken roof panes that had set a cold, cold winter upon them. 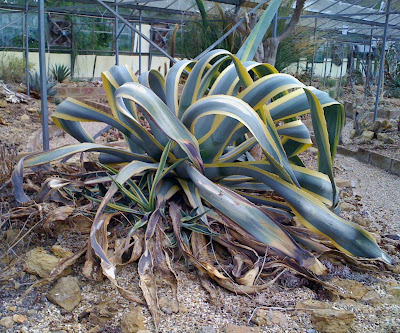 It wasn't just the winter though - this process of neglect and decay had clearly been going on for some time and the Socks wondered at the sad story behind it but didn't like to ask.  Clearly the original cactus collector was no longer able to take care of it. 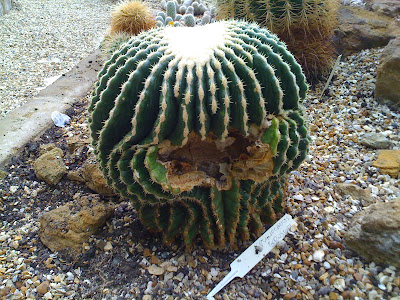 We found one beautiful blue 4ft specimen which seemed to be surviving intact.  On asking the owner how much she would want for it we were told it would be over a hundred pounds - still much cheaper than at the fabulous Architectural Plants but too big for our garden in any case and no obvious way we could have moved it. 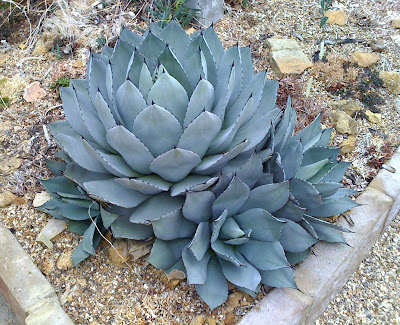 We did take one of its tiny 'pups' though.  We found another medium-sized agave with not too much damage which we were offered for £20 but unfortunately it was so deeply rooted we were unable to dig it up. (Note: if you visit with a view to saving an agave take a decent garden fork/spade with you.)  Eventually we found another one in a toppled over pot and paid £20 for that.  It didn't look much until I stripped off the decaying and damaged growth to find a decent plant with 'pups' springing from it.  The brute is now about to be planted in our front gravel garden. 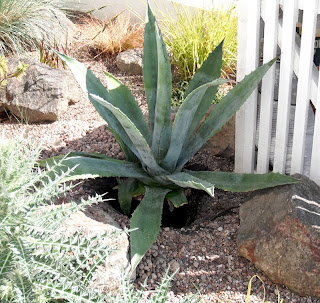 The owner said we were welcome to just help ourselves to some of the pots of 'possibly' live succulents - to literally take pot-luck that they may have survived and regrow. 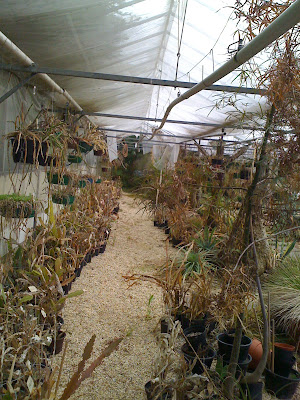 The Socks hardened their hearts.  Viewing cactus is one thing.  Taking them home and filling the already burgeoning greenhouse with half dead plants and nursing them back to health is another.

If you want to save a succulent then you could try contacting the owner at the address on this website link.
Posted by Arabella Sock at Monday, May 24, 2010

Holly Gate started my love affair with cacti many years ago. The only one I still have is an Echinocactus Grusonii. The others lost out to a long forgotten girlfriend who refused to stay in house filled with (her words) "phallic monstrosities".

I'm sure there's a moral there somewhere.

I can truly empathise with how you felt - I paid a visit to Goldbrook Plants in Hoxne, Eye, Suffolk last summer. It was in just the same state of dereliction, apart from one huge polytunnel. The owner, a lady with many gold medals from Chelsea and Hampton Court, needed to retire through ill-health and simply couldn't find anyone to take over from her.

I came away with a free hosta and a hemerocallis, I think because I felt so sorry for her that I hugged her. She had miniature hostas worth thousands, I couldn't believe how much they were worth, but at least much of her remaining stock was being saved by an italian nursery.

Isn't it so sad to see what was once a loved and thriving collection/business, just being left to die. I recall Rob has been there a few times, so he may know more of the story behind it!!

I'm not sure I'm glad to have read this post. It's going to haunt me.

Hi Roland, Rob said on Monday that it had been pretty much closed down for a few years and that he has been down there and looked at the stuff. Not much you can do with it. I went last year and thought maybe it had just closed for the winter but it has been pretty decrepit for ages.

Jro - that is heartbreaking too. So sad that there isn't someone to pass these collections on to. I don't quite know why I bought the agave - it isn't my favourite but it was too sad to leave it there.

I grew up visiting Hollygate and Clive Innes, Even his father worked there in the 60's. my first part time Job was there earning the massive 22.5 pence per hour!! Building the the layout for the now deselect show-house. we were very sad when Terry suddenly Died and learning the politics of the business were not surprised it was going to close> I did buy some plants from the Collection and I wish only to remember the fun I had there over the past 40 years. Jeff

I sit here with tears streaming down my face, saddened at the pictures and story I have read above. As one of Clive Innes' grandchildren, living in the front bungalow of the business with my Mum Sabra, who ran Bamboo Coffee House, I am so so upset. My sister showed me this article and we have agreed not to show our Mum or Grandmother (Gwen Innes), as the sadness would be too much. I grew up at the at Hollygate and never lived anywhere else. My granddad's legacy and passion for Cacti and Succulent still live on in his literature. I am so proud of what he collected and achieved in his life, and am only sorry that myself and my sister were not older when we sold and could have taken the business over ourselves. Sadly plant life can never be resurrected. Lisa

IllinoisLisa - I'm sorry my post made you sad and I can easily imagine how you must feel. A friend had to sell her house with the garden she had worked so hard on over the years to produce a thing of beauty. A prospective buyer came round with horrid young son in tow and stomped around the place saying how she was going to fill in the pond and pull our the shrubs etc. My friend was devastated but couldn't avoid selling it to them as she needed a buyer. The neighbours who moved into the house behind ours trashed the garden of an elderly lady who had employed a weekly gardener to keep it beautiful. The neighbour stomps around his now 'mud flat' saying how he hates flowers. It looks like a rubbish tip and breaks my heart. I guess things just move on and we have to remember them as the glory they were - but it is a dreadful shame.

This is devastating. I've never been to Holly Gate, but looked it up online when I was in the area last week to see when it was open for a visit in the hope of seeing some awesome cacti, and adding to my collection. Instead, I found this post, and it's been haunting me ever since.

I keep coming back to read this , with very heavy heart . I bought some Epiphyllum seeds that Terry had crossed.. they must have been the last he did before he died . They haven't reached flowering stage yet...cant wait to see what their flowers will be like ..I am proud to have a little of his lifetimes work and so pleased for you that you have rescued a few of those precious plants .