Cleve West has a lot to answer for! 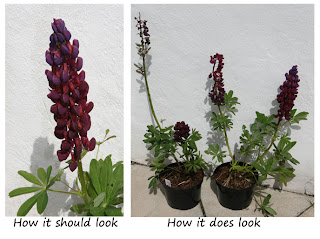 After seeing the fabulous lupinus 'masterpiece' on Cleve West's Chelsea garden the Sock just had to have two to cram into her border. Whilst the Sock would have preferred to buy from a local nursery there aren't any so she ordered online from Crocus.

There was a two week wait for the plants - although the Sock noted that Crocus grabbed the dosh from her account straight away. Imagine the Sock's disappointment when the plants turned up
to find that both had long woody dead stems on where the flowers had died back and formed seed pods (not shown in the photo as the Sock cut them off) and the other flowering stems were already dying back. There was only one decent newish flowering stem. Both plants appeared to have suffered snail attack as the leaves were pretty well chewed and one even had silver snail trails on it!

The Sock emailed Crocus describing the problem and asking if it was normal for them to send out plants like this and the reply was "I have spoken to one of the plant doctors and he has confirmed this is normal for this type of plant at this time of year." Well it might be in his garden but it certainly isn't in the Sock's because she cuts the dead stems off and protects the plants from snails!!!! Why didn't they send them out immediately is anybody's guess or did they sit around for two weeks waiting for them to fade before doing so.

The Sock believes that these are in fact Cleve West's actual lupins retrieved from the dump they were thrown onto after Chelsea!
Posted by Arabella Sock at Sunday, June 22, 2008

I think that is totally shabby personally. If they look rubbish, don't send them. Don't send stuff in that condition.
But if you are still in the mood for Crocus I have a discount code for them on my page - 20% off. (sorry, too lazy to go and get it for you)

Hi Emma and thanks for the codes - I will forgive Crocus because the Bedsock liked the BBQ apron I bought him from there, it's canvas and suede with little clips to hang his BBQ tools from - ha ha ha! It will stop him from getting horrible grease stains all over his best T-shirts.

I did wonder if perhaps I was being foolish in expecting the lupins to be
at the right stage for a display this year - but the snail damage was somewhat unforgiveable.