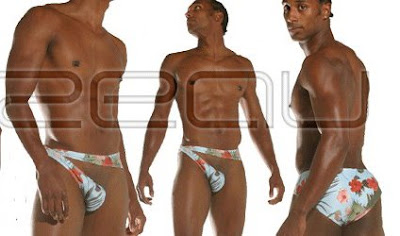 Bit of a Monday morning catch-up for the Sock. First here is another teaser on the pants front - these are some of the more tasteful ones. The Sock is thinking a pink dahlia design would perfect them. (The designers are Vizeau for anyone wanting to buy some.)

Then the Sock has to say she feels rather let down by two of her favourite bloggers this morning.
First the divine James Alexander-Sinclair has written an article in the Garden magazine. Nothing wrong with that and a nice picture of him too sans hat. But he totally ruins it by saying that some people have too many cats on their blogs! THis is just WRONG! You can never have too many cat pictures. 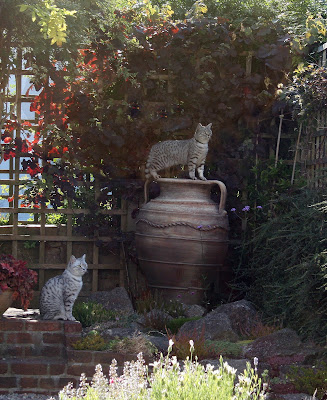 The Sock then popped over to Veg Plotting to read that a fab new programme is starting up on Channel 4 which might have miniature love God Chris Beardshaw as presenter. The Sock rushed over to Chris's site to check this out but it appears to be untrue. Oh the disappointment!

It did however give the Sock another chance to have a good snout around the site again. The Sock sometimes wonders if Chris is promoting himself as well as he might. Don't you think the photo on the front makes him look a bit odd? The one in About Chris is much more gorgeous. Then he writes in the News Section (September 25th) that he must have kissed at least 186 people at Britain in Bloom 2008! The Sock really doesn't think he should be putting himself about so much.

Also, under the Talks and Events section it says nothing about him doing Stand Up Comedy!

Chris needs a new agent and Team Sock are ready and willing.
Posted by Arabella Sock at Monday, September 29, 2008

Labels: with your cute little ways will you promise that you'll save, your kisses for me..

Since reading JAS's comment about cats on blogs some months ago, I have refrained from posting any of mine at all. I have a regular pride(5 here plus one at my parents), including a Snow Bengal (not sure if your cats are too). He also referred to bad poetry and I an still in recovery from being chastised for having the longest blog post he had ever read (I put the full version of an A Pope poem on it)! More cats I say. You can NEVER have enough cats.

That is awful! You shouldn't have taken any notice of him. He clearly doesn't like cats because he is so vain he can't stand the competition!
My cats are even more gorgeous than him.

Mine are British Shorthair Silver spotted. They are my little snow leopards.

I'm off now to write a really bad poem... what rhymes with Sinclair?

Mohair rhymes with Sinclair. As does nightmair, unfair and Ryanair.
At this stage in the trial I would like to state that I have nothing at all against cats - in moderation. I have one very immoderately proportioned one sitting on my desk at the moment. I also once owned a deaf cat called Count Otto von Schnuffelburger. He wandered over the wall into ASDA one day and, sadly was never seen again........
I also assure you that I am quite fond of Alexander Pope.

PS
Those are very similar to the ones that Cleve west was wearing. Except his were crocheted (which, on reflection, were rather too well ventilated for comfort)

As an ex-physicist I am amazed to discover a clothing manufacturer has finally perfected an antigravity mechanism - I can't see how they would stay up otherwise.


Pants that is, not cats.


Cats worked out anti-gravity long ago, but aren't letting on to mere mortals like us.


Not until they get orders from the mothership anyway.

I've spent some time looking at the pants (purely for research purposes) and still can't figure out how they work. I may have to experiment and try to recreate the design with SomeBeans and some floral curtains.

Your cats are most elegant, Arabella. Perhaps there should be an annual 'lets all post cat photos and dire poetry on our blogs' day - it will be known henceforth as LAPCPADPOUB day.

That is a great idea. Cats and bad poetry day - let's make it so.

Zoe I went straight over to your blog and looked everywhere and could only find His Orangeness - such a beauty. I think you probably need to post pictures of the others straight away!

Thanks for clearing up my query re the telly programme Arabella. He may not be presenting the one mentioned on my blog, but at least he will be on your screens next month!

I second the need for cats and bad poetry. Like Zoe, I've not only been chastised by JAS for the quality of my doggerel, he's totally banned me from writing any bad poetry ever again! I'm having to resort to posting my stash of bad magnetic poetry written a few years ago to get around that one!

PS It's National Poetry Day next month. This year's theme is WORK - cue for plenty of bad bon mots I fear.

Too many cats on blogs? Really? How's that even possible? And did he mention any blogs in particular? ;-)Personally I find 8 cats very moderate but YMMV.

On a different note; I too am amazed how these pants defy gravity. Fascinating! I've spend hours studying this mindboggling fenomenon. Hours!

Cats and bad poetry, yes, that's just what we all need. :-D

I think really that the only way James can make amends to all the cat lovers is by putting a picture of his immoderately proportioned cat on his blog!

Somehow I think it will probably just be me...

French knickers cut in. I don't know any woman who has ever felt comfortable in them. They must have been designed by a man.