The mirror, the postcard and the wardrobe 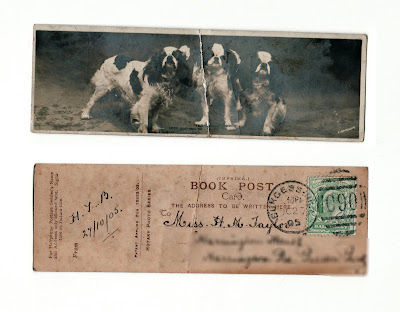 R. Pete Free recently blogged about some old furniture she was re-using and the little bits of history contained in the objects and aromas left behind in some old drawers. It reminded me of an absolutely charming find in my Victorian wardrobe bought from an antique shop some years ago. The wardrobe is an enormous satin walnut piece with various drawers and two separate cupboards each with a mirrored door. It was clearly made for a much grander and larger house than my victorian terraced one.

The first time I cleaned it I noticed a little bit of cardboard sticking out from behind the mirror. Easing it out I found the delightful little card pictured above which had obviously been hidden there by a previous owner. The card was a Book Post Card addressed to a house in my area and posted in 1905 - the house is still in existence and would previously have been regarded as a manor house and belong to someone reasonably wealthy. The card, which is slightly larger than a cigarette card, has a halfpenny stamp on it and for this amount of money only the senders name and address could be written on it - in this case just the date 27/10/05 and initials H.J.B. (or could they be a secret love code?)

The card has three cavalier spaniels(?) on the front and was sent to a Miss. H.M. Taylor and postmarked Burgess Hill. It is my belief that it was from a fiancé or boyfriend and then hidden as a keepsake behind the mirror by Miss Taylor - perhaps her family didn't approve!

I have replaced the card back behind the mirror where it will stay but I have also added my own little keepsake - a photograph of myself and the Bedsock signed with love. I hope when this wardrobe has passed on to the next owner that they may come across it and uphold the tradition by adding their own token.
Posted by Arabella Sock at Saturday, December 20, 2008

What a fab story Arabella - and I love the fact that you've added to it.

(Sorry I've broken the link in my blog, but your story stands alone anyway)

I'm glad you enjoyed it. I've removed the link from my blog so it makes better sense now.

Burgess Hill is well classy I always said so

Are we thinking about the same place, Emma? The joke in Brighton is to call the residents the Burgess Hillbillies!