Snooping around blogworld as is her wont, the Sock is led to believe that Anne Wareham (affectionately known in the hortiworld as Doris Bonkers) is about to give birth to a book called 'The Angry Gardener'. Some of you may remember Doris from her stint on C5's 'Best Garden in Britain' or whatever it was called. You know.. the one with the three judges format one of whom (guess who) was the narsty judge.

So 'The Angry Gardener'... whatever next? 'The Apoplectic with Rage Gardener'? The 'So Incandescent with Rage my Head Exploded Gardener'?

Anne lives in Wales which might explain everything. The Sock has been there and sympathises. 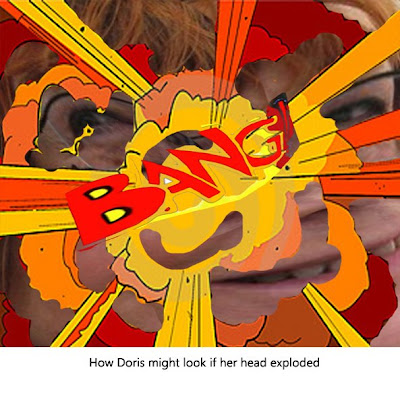 Update.. It has been bought to the Sock's attention that 'The Angry Gardener' is an anagram of
'Garden Hag Reentry' and very nearly an anagram of 'Danger Great Hyena'. Anyone got any more?

Further Update.. It turns out that in fact the book is to be called 'The Bad-tempered Gardener' which in the Sock's view is a mistake. Not only does it not sound as catchy but it is too long to be bothered anagramming.

I’m all agog. I feel a TV spin off is on the way along the lines of Grumpy Old Gardeners. Trouble is, apart from Anne, I can’t think of anyone else for the line-up??? How can a glorious activity such as gardening induce feelings of anger?

I don't know.. although I was pretty pissed off with the vine weevils eating my heuchera!

Regathered Granny - which maybe who Doris becomes if she manages to get her exploded bits back together.

Dry Earth Gangrene - which does sound like something that would make a gardener angry.


I don't know if you know this, but I myself am an anagram.

I did know you were an anagram Dishwasher Crab and may I say a totally adorable one too...

Perhaps Garden Monkey's Chester Hunt and Old Nelson could be persuaded to join in on the Grumpy Old Gardeners spinoff?

WV is providing them with a comode, so it looks like the idea's getting the thumbs up somewhere!

Thank you Arabella, that's very kind of you!

Should you ever fancy becoming an anagram yourself, some possibilities:

...which just goes to show we shouldn't believe all we read on the net - even from such august sites as HW. Anne's book (which I'm being allowed to pre-read as work in progress) has a working title of 'the bad-tempered gardener' - those of you with bulgy bookshelves like me don't need the word-play explained.
Anne gets a lot of bad press for being brave enough to speak her mind, but she's warm, funny, clever and one heck of a gardener as anyone visiting the Veddw will find out. The book's about the making of that garden and how that influenced the way she thinks - it's going to be a good'n!

Oh what a shame - I think 'The Angry Gardener' has a better ring to it she should change the title. I thought it was going to be something about her railing against the design mistakes people make in their gardens.. perhaps she could do that in Volume II.

Dishwasher Crab is the best anagram ever. Not only a brilliant wordplay but relevant to me as I have been in love with my dishwasher since it first made an appearance in my life. Love crab too and the idea there may be an invisible one living in my Bosch. So to speak.

I'd never heard of the Grumpy person until I saw her on that programme but I'm left puzzling as to why she chose not to portray herself as warm and funny on that. Va savoir!