January doesn't seem the luckiest month for gardening bloggers with various people falling off see-saws or impinging their shoulders. James A-S has been a brave little soldier and kindly shared a picture of his war wound with us.

The Sock has been unable to get a photograph that does full justice to her skin-tag but does have a picture of pussbaby Luka's poorly paw. 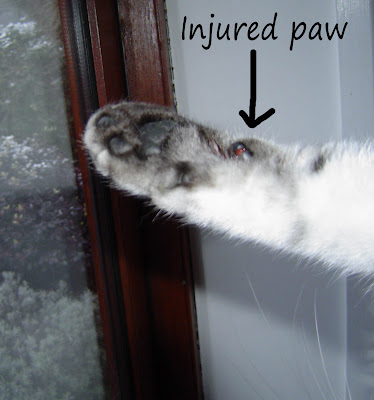 Luka ran out gleefully into the smattering of snow the other morning appearing a short time later with a tiny bit of a limp. Inspection of his paw revealed that one of his pads had been cut into quite deeply so it was off to the vets. £66 later Luka had had an anti-biotic injection and his entire leg was wrapped up in a huge bandage with a blue sock over it. He looked ridiculous. The minute we got home and he was let out of the cat basket he ran madly around in crazed circles shaking the bandaged paw in the air with all the vehemence of someone trying to flick a particularly sticky bogey off their finger. The blue sock and bandage flew off in one piece much to Luka's satisfaction and the Sock's horror. Visit number two to the vets produced the verdict that he probably wasn't going to keep a bandage on and that as it had only been there to keep the wound clean we might as well leave it to heal on its own. Had this fairly obvious idea been thought of earlier it might have saved the Sock a deal of money. Luckily my little darling is worth it.

Have you got an injury you would like to share? Blog it and you will almost certainly get some sympathy.
Posted by Arabella Sock at Thursday, January 15, 2009

I've got an interesting thing on my leg. Remind me to show it to you
next time we meet.

In fact, anyone else who wants to see it can meet me behind the Pimms tent at Chelsea and in exchange for an interesting plant or cutting I will reveal all.

I did think about seeing a doctor, who would have given me a prescription for a whole bag of creams and suppositories, referred me to a dermatologist, got me a hospital appointment, recommended a skin graft etc etc. Instead I showed it to an English friend who had just done her dermato training and she said "I don't know what it is but it isn't cancerous" thus cutting out the need for long and expensive treatment and an even bigger hole in the French Social Security budget.

By the way, it doesn't impinge.( I am now going to overuse the word "impingement" and am trying to find an opportunity to have an ethical one.)

OK. I'll swap you a view of the interesting leg thing for a glance at the small round white scar with red bit in the middle on my back. The scar isn't much to see itself, however the story behind it is more interesting. I was on holiday in Northern Spain with my parents and brother (age about 12) sunbathing on a beach when an enormous horsefly landed on my back. My brother noticed this and instead of swatting it off like any normal person would have done he decided he would watch with interest whilst it bit deep into my skin!!! The scar is the result of that painful bite and a reminder how mean boys are!!

I have some verrucas - they're definitely organic, and I'm pretty sure they're sustainable, but probably not that ethical.

I also have a small scar on the top of my left foot, from having knocked a glass off a shelf in a hotel bathroom when I was little. Nowadays if a child did this the parents would no doubt sue the hotel for its shocking use of hazardous toothbrush holders and the child would have to have trauma counselling. Back in the 70s, I think my parents asked the manager for a plaster, apologised for the mess on the bathroom floor, and offered to pay for the glass.

Oh this is getting fun.

I've got a small scar next to my eye where I cut it open after bouncing off the bed onto the bedding box (I was only 7 in case you thought something more interesting was going on.) My brother got his lip smashed in a fight at school. We used to sit at either end of the dining table at meal times and he would call me "scar-eye, scar-eye" and I would respond with "droopy-lip, droopy-lip" until my Mother belted us one and told us to shut up. We would carry on by signing at each other - he would stare at me running a finger down the side of his eye and I would run my finger in a curve down from my lip. Oh what laughs we had.

My goodness, Arabella.
I have a small scar by my eye as well. I got it by falling off a moped and foolishly landing on my face. To make matters worse the girl who was riding pillion landed on top of me and ground the area further into the gravel.
I like to think that I chivalrously inserted myself twixt her and ground as she walked away completely without blemish.
Still didn't get lucky though...

That shows what innate good manners you have James - an admirable and attractive trait in any man which should have guaranteed you, at the very least, a quick fumble.

The Bedsock wooed me with a display of immaculate manners, always opening doors for me, insisting I had the best seat at restaurant tables etc.
Sadly things have changed and I am now pushed to the front on pathways in the early mornings when there is a danger of walking face first into spiders webs.