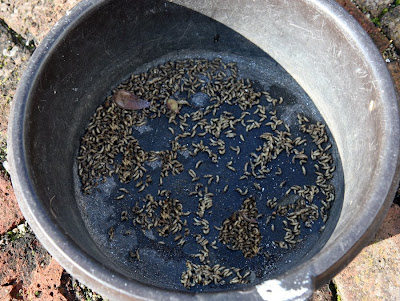 The Sock is not happy. No the Sock is not happy at all. She was just coming in from working in the garden, tired but happy in this first day of real spring warmth and sunshine and about to reward herself with a caffè corretto (an Italian coffee consisting of a shot of espresso "corrected" with a shot of brandy). As she walked into the kitchen a slight whiff from veggie waste box reminded her it was about time to feed the wormery.

The wormery is the Bedsock's project. He was desperate to have one but knowing the way it was likely to go the Sock warned him that he would have to look after it, he would have to find somewhere (sensible) to put it, and that a wormery was forever not just for Christmas. So the Bedsock bought one and drowned the first two lots of worms by not draining off the wormery properly. The Sock warned three strikes and the wormery was out but this lot of worms have thrived. They are not the only things to have thrived.......

The Bedsock has seen fit to move the wormery into the shed for the winter where it is blocking the door and preventing any access into the shed. The Sock is already pissed off about this. When the Sock opened said wormery today imagine her absolute delight to find it was absolutely writhing with maggots! Great moving mounds of the b*ggers many of which were in the lid and now on the floor of the shed and on the sleeve of the Sock's fleece! Gagging with disgust the Sock ran back into the house to take photographic evidence of what she had had to endure.

Then in an heroic gesture she donned some thin surgical gloves and scooped some of the worst piles of maggots off the bin and into an old washing up bowl on the ground next to her. Trying to dig out some of the goddamn maggots entrenched around the rim of the wormery lid meant that one spidged out of the rim and straight into her face - luckily the Sock's mouth was closed. Puke!
The Sock looked down and to add to her total happiness she found a cat had chosen to sit in the maggot bowl! Joy! The Sock kicked the cat out of the bowl along with a shower of freakin' maggots.

At this point the telephone rings. It is the Bedsock saying he is on the cross-channel ferry on the way back from Belgium. He had better have bought the Sock some chocolates. The Sock returns to the garden to find the other cat now sat in the maggot bowl. Sob!

Then just to put the bloody cap on it the Sock finds there was no memory card in the blasted camera so she doesn't have any photos!

The Sock can't wait for the Belgian chocolates so goes out and buys a Cadbury's flake. The cats are locked out until they have shaken the maggots off. The Bedsock will have to do a lot to make up for this horror - the Sock can feel a Gabriel Ash greenhouse in the offing....
Posted by Arabella Sock at Saturday, February 21, 2009

Labels: the long thin slimey ones slip down easily

Reminds me of when the farmer's wife put the unwrapped remnants of a chicken slaughtering in the communal dustbin on a hot summer's day and left them to the inevitable consequences. Very Silent Witness.

I found some fungus gnat offspring in a pot today but it doesn't compare.

It irritates my inner pedant when the blog says "one commentS" so I've sorted it.

I don't wish to be picky during such traumatic times, but is 'slimey' spelt with an 'e'?

Jeeesus! Here I am suffering from post traumatic disorder and all you two can do is pick faults!!! I am convinced that slimey is spelt like that (ohmigod do I mean spelled?) otherwise it would be slimy. And I never even noticed the comments bit and now I will obsess over it.

The Bedsock has arrived home sans Belgian chocolates. But never mind along with his haul of various pates, rillettes and cheeses he has bought me some kumatoes! Yes... really!

As I have turned to religion I have now deleted some of the many swear words that were in the original post.

As a penance, you could always subject the Bedsock to some sort of Bushtucker Trial-style retribution?

Now I was thinking of doing just that HappyM when the Bedsock suddenly presented me with a gorgeous little gift box of Belgian chocolates this morning. My eyes misted over with tears.. he did care after all.. "You bought these just for me darling" I said. "No" he replied "they were given to all the participants of the course I was on."

I did point out that giving me freebie chocolates wasn't quite as thoughtful as I might have hoped for and perhaps he should have lied.

Never mind - you must rise above bad thoughts, now you are a holy, holey Sock
Anonjan(sainthood and patent pending)

Ewwwwwwwwwwww and triple yuck! You poor thing. You need therapy and fast to the tune of at least 5 kg of Belgian chocolate. A freebie will not do it. Just send him back to Belgium for 5 tons of chocolate, you know you are worth it.

Kittycats are maggot free I hope?

So, what did you do with all those maggots? Did you just leave them there for the Bedsock to deal with?

I have a friend (very unpopular in her locale) who owns a maggot farm. I have declined her numerous invitations to go on a tour!

I feel just a teensy weensy bit of a wuss now having read Victoria's traumatic gardening tale of cutting her finger end off.

I left the maggot bowl out in the hope that some birds might have them for brekkie. I haven't dared look to see if they have gone.

The cats were let in after being inspected from a distance to try and ensure there was nothing more clinging to them.

Erm - I meant to ask Fat Rascal what do fungus gnat offspring look like?

I love it ! Very creative ! That's actually really cool Thanks.