The Sock has wasted a considerable amount of time today and it is all James fault! Clearly the Sock had to rush out and buy a copy of Gardener's World after James had said on his blog "there is a photograph of me with a ludicrous looking pudding bowl hairstyle. I assure you all that I have never had such a coiffure and it must have been photoshopped in after the event".

So the Sock drove all the way out to the garden centre where they only had February's GW in store. Unfortunately the Sock couldn't remember which month James was in so tore open the plastic bag it comes in and started leafing through the contents. When some snitty young madam asked the Sock if she was going to buy it she was told "not unless there's a picture of James Alexander-Sinclair's hairdo in it!"

The Sock eventually found a copy of March GW in a newsagent. It was worth the trek! Ha ha ha! James - what have they done to you? And why? You will all have to buy your own copies to see the pudding bowl look but in the meantime here is a little quizette..

Whose hair is it anyway? James is sporting the hair of 6 different horticulturalists. (The Sock could easily fall in love with number 4 being a combination of her two favourite men!!) 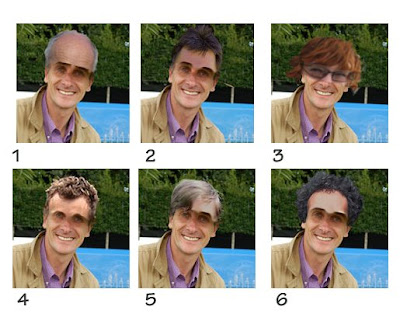 And talking about people looking mad.. take a look at the picture of Chris Beardshaw in March's RHS 'The Garden' magazine!
Posted by Arabella Sock at Thursday, February 26, 2009

Number 4 looks scarily like someone I used to work with. You wouldn't have fallen in lover with him, I can assure you Arabella.

Number 4 looks like some news presenter whose name I can't remember but not Nick Ross.

Oops! I had used the french word sirop instead of syrup in the title!
For those who don't know "syrup of fig" is cockney rhyming slang for wig - shortened to just syrup.

Arabella - you're a very naughty girl ;)

Must peruse my copy of The Garden again as that totally passed me by. Shows I don't have a CB radar like you must have.

PS Glad you explained the sirop!

I just realised that I hadn't made it clear that James is wearing foreheads and hair 'famous' in the gardening world - so there is no excuse for not guessing who they belong to.

CB is wearing a rather nice white shirt in 'The Garden' piccie. I wonder where he got it - if they come in adult sizes I would get one for the Bedsock.

Ooooooh, I love a guessing game!
4 looks like the Polly Pocket of the horticultural world, Crusty Breadstick.
6 I suspect is His Manliness Monty Done.
The others I need to ponder further!

Well done Ms. B! I'll give people a clue on number 5 - putting the hair on JAS makes it look 100% better than on its original owner!

Actually that is true to an extent of all of them except perhaps number 1.

No. 2 is the High Sheriff of the Isle of Wight, his Horticultural Highness Alan Titchmarsh

Now I'm not sure - it could be Matthew Biggs

You were right first time HappyM. No 2. is indeed his High Sheriffness Alan T.

Never knew that Leo Sayer (No6) was a horticulturist. Did you discover this on your trip to Oz?

I am very concerned that Number 5 (which, I believe, belongs to Ms Walkden) is the closest to my natural coiffage.
You have not succeeded in making me feel any better, Madam, Sock!
(except for your charming remarks about number 4: although sharing a tonsure with one as sainted as CB would be tricky)

You are absolutely right James but its not Ms Walkden's hair that is the problem - its the face that goes with it! There look you've made me be horribly cruel!

Stop fishing for compliments - you are gorgeous and everyone loves you just the way you are.

We still have numbers 1 and 3 to go for.

Double drat that you've decided not to show the pudding head, I was so looking forward to it. Have you any idea how insanely expensive GW is in my country?

You can't cajole me into showing you the pudding head, Yolanda-E! You will have to work on James.. perhaps you could bribe him with something? A pretty picture of a pussy cat maybe?

No 1 looks remarkably like Jon Snow to me. Does he do gardening? My hunch is Peter Seabrook - just had to Google for a few piccies. Hmmmm, could be?????

Wrong!!! It isn't Peter Seabrook it is somebody nice.

I have to go to bed early as the fumes from the paint are knocking me out. The colour is 'coquette'.

Ms B. if you haven't got the answer by tomorrow I shall leave a little note pinned to your chair at the Opera.

Coquette means flirt or tease. What colour is that?

There are websites where you can see how you'd look with various hairstyles and you have to pay. You'll have to send a bill.

Coquette is pretty much exactly the same colour it was before it was painted except a lot cleaner! It is a sort of greyish, pinkish, lilacly colour with a bit of heather thrown in.

I didn't think James totally appreciated the bonce makeovers so not much chance of him making a donation. Also in all his online pictures his eyes are always shadowed by his hat so that makes it difficult to blend him in with other people. If the Sockerazzi are out again this year I'll pay more for a hatless James piccie. By the way No. 1 was Nigel Colborn and no 3 was D.B.

ha ha, I spotted the GW pic, and James's observation weflected my own entirely... what's it with the puddin' bowl, I thought, no wonder he wears that 'at!!

I love it ! Very creative ! That's actually really cool Thanks.