The Socks just got back from a weekend shopping trip to London. This was remarkably successful - all items on the list were purchased plus some extras. The Sock has a new suitcase (more on this later), ankle boots, duvet set, towel and found a whole street dedicated to fabric shops. The Bedsock bought a cashmere scarf and..

The Sock is very lucky in that the Bedsock enjoys shopping - anything from fashion to food although possibly he finds the latter more engrossing being an excellent cook. (The Sock is 'bigging him up' here because the Bedsock got a teensy little bit huffetty about being made to look such a wuss in the last blog about spiders. The Bedsock wishes to point out that whilst the Sock isn't quite so bad about garden spiders he is the one who has to battle against the horrifyingly huge, black indoor ones that scuttle around in a narsty threatening manner.)

Anyway.. the pants. Whilst we were doing a quick Sunday morning shop in Selfridges, prior to our excellent dim sum lunch at the Royal China Club, the Bedsock went for a quick browse in the men's department in order to buy some Sloggis a brand both the Socks favour for their underwear. The Sock joined him there and added a towel to his purchase of a couple of pairs of Sloggis and some new pants he had decided to try - a pair of Calvin Kleins and a pair of Dolce and Gabbanas. 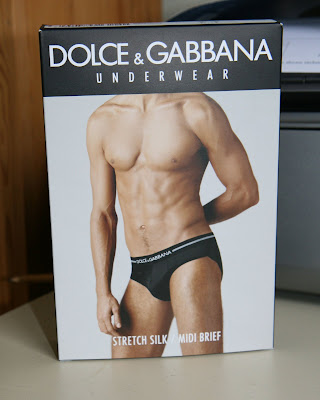 On returning home last night the Sock was looking at these new purchases and noticed that the Dolce and Gabbanas were made from black silk, rather more glamorous than the Bedsocks normal pants of choice. "I wonder how much those were.." thought the Sock and looked at the label...

screamed the Sock. "Did you know how much they were?". The Bedsock looked a bit crestfallen as he hadn't really looked at the price because "how much can pants be?" £68 freakin' quid as it turns out!!! Even the Sock never pays that much for her little Hanro silk vests. It's not like he's David Beckham - thank the Lord. The Bedsock hadn't registered the price when he paid at the till because the Sock had added her purchases to his and he assumed the cost was for those.

The Sock suggested that she return the pants to Selfridges as the box had not been opened but unfortunately by then the Bedsock was getting to rather like the idea of some silk underwear... We can only hope that at that price he doesn't get a taste for them...
Posted by Arabella Sock at Monday, September 28, 2009

Chortle. But what's a Bedsock to do when his beloved's the purest, softest cashmere?

I found the ideal replacement purse at Mulberry's factory shop in Shepton Mallett recently. I have very particular requirements, so have failed utterly so far in finding a substitute for my Speedo one which now leaks loose change everywhere.

I've still failed because the 'replacement' I found was £85 and that was half price! :o

Good grief, I thought Sloggis were expensive! (But worth it...)

I'm sure the Bedsock's bottom is worth a little luxury?
Snork!
Anonjan

Aah..Arabella
It is good to know that you can always be relied upon to drag things southwards every so often.
To be honest, however I thought that perhaps the juxtaposition between underwear and the expression 'bigging him up' might be a tad unruly.
There.
I've now gone too far..

That is very wicked of you James.

You won't be invited to speak with dear Queen Liz again if you are not careful. They will ask that nice serious young man Chris Beardshaw next time.

Pants!!!! to that price, are they insane? It's only men's undies, innit? So not really all that important. Now for us girls, that's a different matter altogether. ;-)