clic for the flic
Posted by Arabella Sock at Thursday, October 29, 2009 15 comments 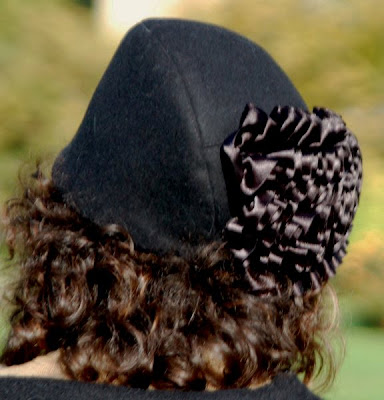 The Sock bought herself a new hattiewat for the winter season at the Origins Craft Fair at Somerset House a week or so ago (photo courtesy Ms. B) Isn't it marvellous?

The Sock thought she had better post as she knew you would all be worried at the lack of blogging. Bedsockflu (this is like a very mild dose of man flu and not the swine flu but still requires a lot of sympathy and ooohing and ahhing which quite frankly the Sock is not terribly good at) squitty kitty angst and the probability that she is about to succumb to a cold herself has taken up a lot of the Sock's time and energy.

Rather more life affirming was a visit to Ms. B's home where the Sock was given delicious home-made cakes prior to burning the calories off by scaling the tree-top walk at Kew. 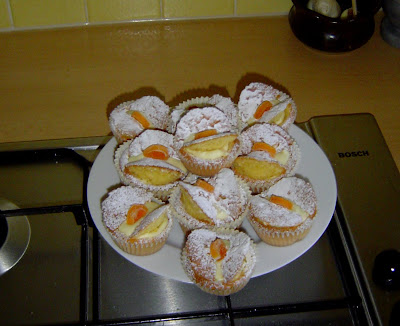 These were much better than the cupcakes the Sock bought the previous weekend which were a bit heavy on the buttercream and also contained a rather sharp bit of plastic.

Thingy still doesn't have a name after 3 weeks and the Sock can't resume normal blog service until he gets one.
Posted by Arabella Sock at Saturday, October 24, 2009 19 comments

Say what you see 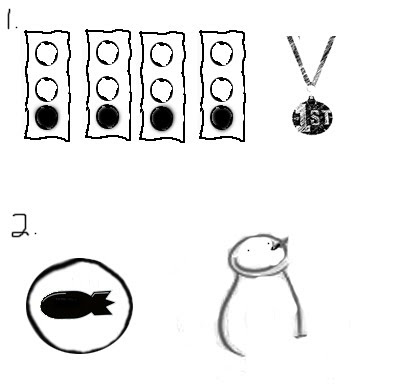 The Sock is sharing with you a little brain teaser that the Bedsock tried out on her. It took the Sock a while to get it but that was entirely because the Bedsock had sketched it badly!!

The drawing above represent two phrases.. what are they?

If you have seen these before you are not allowed to tell the answer - people must get their own brains into action.
Posted by Arabella Sock at Sunday, October 18, 2009 16 comments

Please allow me to introduce myself 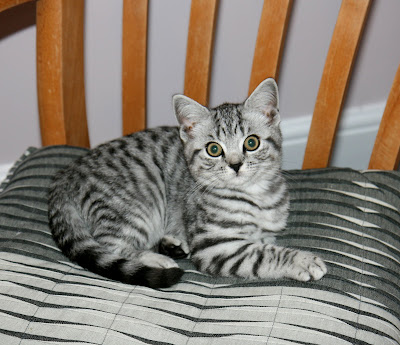 Hello, I'm 'thingy' and I have just moved in to Sock Towers. The new mummy I've adopted says she only got me cos I match the cushions! Mummy thought I was going to be a frightened little kitty in awe of my new surroundings but I took control of everything immediately and made myself right at home! 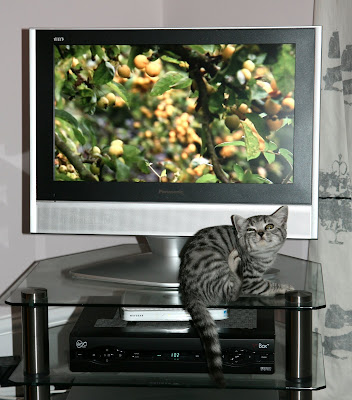 My new family like to watch Gardeners' World together. We laugh all the way through. 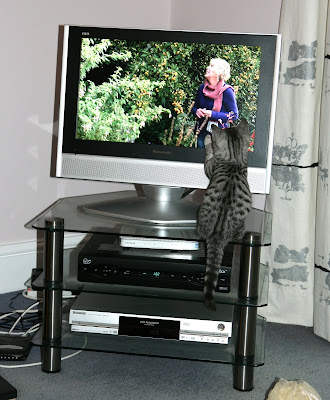 I like Carol best but I run away when Toby comes on screen. 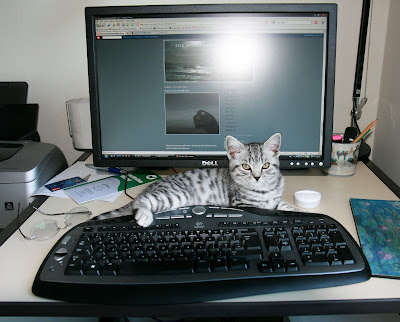 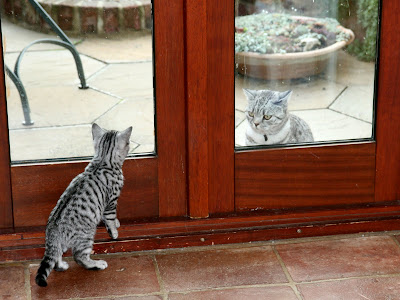 This is my new best friend Hebe. We like to play hide and seek a lot. Hebe hides from me all the time but I can always find her! I like to cuddle up close to Hebe and listen to all the funny growling and hissing noises she makes to show how much she loves me. 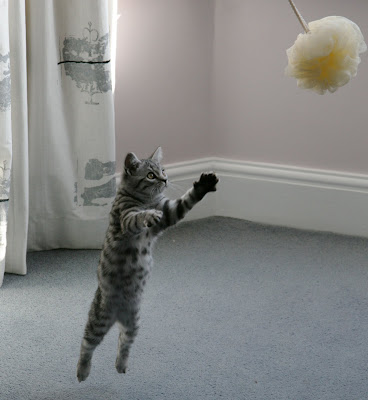 I like to play all the time as I have lots and lots of energy. My new mummy says I am an (annoying little bugger) sweet little angel. 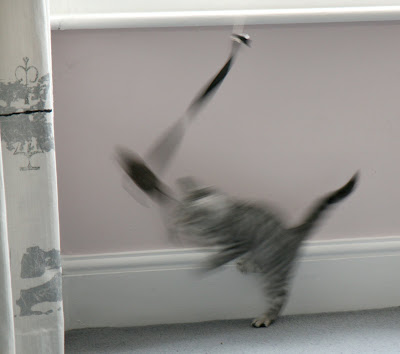 I am the world's fastest, bounciest cat. I have limitless energy. I have a very loud voice and if I am not kept constantly amused I scream the place down! 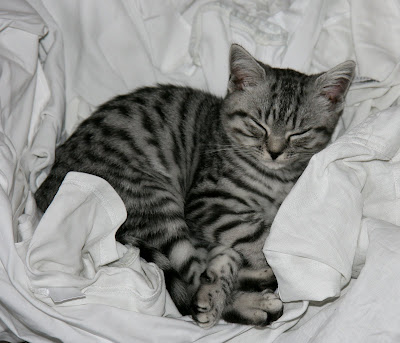 Daddy says he likes me best when I am asleep. Mummy agrees but says it would be better if I didn't sleep on the clean washing.

I have a voracious appetite and eat everything I can get my paws on. My new family lock me out of the room when they are eating. I think this is very mean - although I did jump into their Merguez casserole and skid through the sauce with my paws on a sausage. They were not very pleased but I know they love me because they said I was a "bloody nuisance".

The only problem is that they haven't given me a name yet. Mummy says that I need a name that has

Can anybody suggest a suitable male name for me?
Posted by Arabella Sock at Thursday, October 15, 2009 50 comments

Ask Arabella about your bookywook

In a week that has seen the release of over 800 new hardbacks in time for the Christmas market the Sea of Immeasurable Gravy has been inundated with letters from celebs seeking free publicity!! Fat Rascal and the Blackfingernail have been helping sort through the backlog. Here are some samples...

I have a new book out 'The Livingstone Daisies'. In order to let my adoring public know of it's existence I have been forced to do the rounds of chat show hosts and newspaper articles. Unfortunately I inadvertently let slip that I had always thought Berryfields "had the whiff of a corporation carpark" about it. Now everyone is saying I'm a fake! How can I make people understand that I am a simple man who likes nothing better than to spend my time tilling the soil at my second home farm in Wales and not just some bandwaggoning celebrity navel-gazer?

PS. Can I interest you in my new range of hair care products and Monty Man-Bags?

I have various new books out again, too many to mention here but nobody is taking me seriously anymore. How can I make people understand that I am a gardening sex god and not just an afternoon chat show host and snack advertiser. It’s all so terribly tiring.

PS. Can I interest you in my new range of garden tools, compilation CD, and the AT range of men's silk underpants at only £69.50 a pair?

We have new books out but who will buy them when there are so many excellent offerings available from bling producing former holiday presenters and self-proclaimed gardening gods?

I've just wrote a new Captain Hook wot I have called 'The Mistress'. It deals wiv passion an' prejudice, the love of a beautiful woman Arabella (who thinks she is a Teddington Lock) for a geezer much smaller than 'er.. Can their Golden Dove survive in the Chevy Chase of public prejudice? As the young gardening odd bod hugs 'er in his big strong lucky charms a tear falls from Arabella's big brahn mince pies which are perfickly framed by 'er long Upton Park lashes.... (continued fer anuvver 256 pages)

Didn't quite understand the Cockney Rhyming slang but it appears you have stolen the script for my new book 'The Gardening God of Small Things'. Solicitor's letter will follow. A.S.
Posted by Arabella Sock at Sunday, October 11, 2009 7 comments

The Times they are A-changing

Come gather 'round people
Wherever you roam
And admit that the waters
Around you have grown
And accept it that soon
You'll be drenched to the bone.
If your time to you
Is worth savin'
Then you better start swimmin'
Or you'll sink like a stone
For the times they are a-changin'.


It has been more than three months since my darling cat Luka died. Three months that I have quite literally felt that I have been drowning in tears. I have wanted to write about my love and loss of Luka in the hope that it would help expunge my grief but whilst my head is full of everything I want to say, it has been too painful to set it down on paper.

We have a new family member at Sock Towers and I will soon introduce you to him on my blog but I can't do that without first acknowledging the fact that Luka will never be forgotten and how much he was, and always will be loved.

Whilst I write this the floodgates open again and my tears are falling onto my new kitten's back as he is curled up on my lap. I owe it to him, Hebe and the Bedsock, to start swimming through them.
Posted by Arabella Sock at Friday, October 09, 2009 9 comments

If I had a Ribbon Bow

It's National Poetry Day with a theme of heroes and heroines. The Sock is going to share with you her favouritest song lyrics ever but first the song itself. Fairport Convention singing 'If I had a Ribbon Bow' (it takes a while to start)

It took the Sock a long time to get a ribbon bow but sure enough when she did the Bedsock turned up. He is my hero.
Posted by Arabella Sock at Thursday, October 08, 2009 10 comments

Sock's in the Doldrums 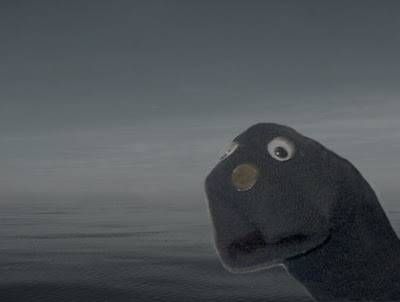 The Sea of Immeasurable Gravy has become becalmed and the Sock is stuck in the doldrums.

Just waiting for a sea breeze to fill the sails of inspiration..
Posted by Arabella Sock at Tuesday, October 06, 2009 11 comments