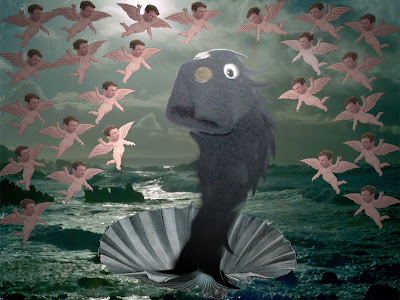 The Sea of Immeasurable Gravy is proud to present to you their new Advent calendar (clic on the pic to enlarge).  Each day, from December the 1st during the lead up to Christmas  we will clic on one of the darling little cheribums to see which of our gardening friends are joining in the festivities. (Or there just might be a chocolate which Arabella will eat on your behalf!)
Posted by Arabella Sock at Monday, November 30, 2009 8 comments

The Kitten Diaries Part I 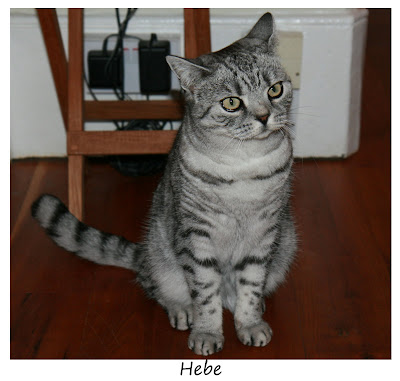 It's been here a month now and there seems no prospect of it going.  I thought when they didn't give it a name it was only here on a temporary basis but now they're calling it Spook - sums it all up really. :(

Ha ha ha - I did laugh this morning.  I was in the bedroom wardrobe and watched the scene unfold from my hiding place.  The Bedsock bought a breakfast tray up to bed, hot buttered toast with marmite and a cup of coffee.  As he put the tray down on the bed Spook flew out of nowhere and landed on the tray spilling the coffee all over Arabella's newly washed duvet.  Then he trampled all over the toast leaving marmite pawprints across the bed as he fled!  When I heard the Bedsock curse that that was the last of the butter so he couldn't make any more toast,  I laughed so much I wee'd in the wardrobe! Then I gave Arabella's new leather boots a quick scratch just for the hell of it. Sadly the marmite incident didn't spell Spook's demise although it was a close thing. 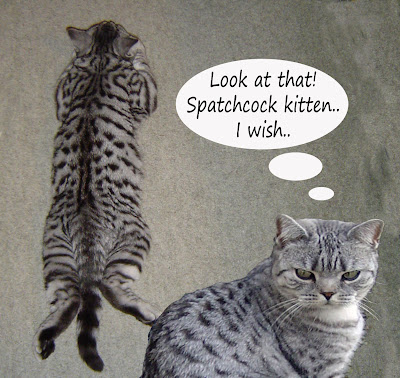 The Bedsock  bought  a little box of 4 Ferrero Rocher chocolates home - God knows why when there is Choccywoccydooda in town selling the real stuff.   Anyway, the Bedsock ate two, Arabella ate one and said she would save the last one for later - so I hid it under the sofa! Ha ha.  First Arabella blamed the Bedsock for scoffing the last chocolate... then after he had vigorously denied this Spook got the blame.  LOL!  A few more tricks like that and perhaps they'll get shot of him... 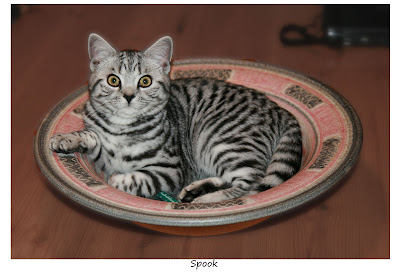 Hello, hello, hello, I'm mad me!  I like to play and I like to cuddle and best of all I like to eat. Eat! Eat! Eat! I will eat anything.  I like to share everyone's food. When Daddy cooks a meal we all rush around laughing and singing "We're having chicken tonight" and then just as we all sit down to eat I get lobbed out into the hall and the door slammed behind me!  I don't understand. Never mind, they will soon all come round to my way of doing it.

Another thing that is odd - before Mummy goes to sleep we play for a bit on the bed.  I jump around and bite her feet and then when Mummy tries to stop me I release a bit of wind  (all this food does make me terribly gassy).  Then I get lobbed out into the hall and the door slammed behind me!  It just doesn't make sense!

When Mummy is making breakfast for me and Hebe in the kitchen, I like to show her how happy I am by running up her legs and hanging onto her bottom by my claws.  She screams and then I get lobbed out into the hall and the door slammed behind me!  This is really a very weird place and I will have to make sure that the servants are a bit better trained. 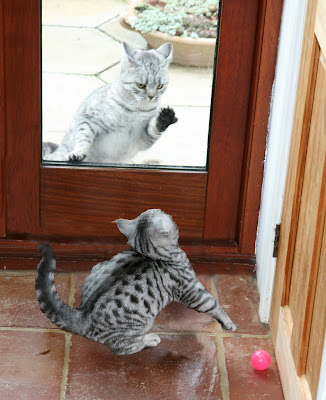 Hebe likes to play with me but for some reason she prefers to have glass doors between us.  This seems very strange to me as I can't jump on her and bite her ears in that affectionate and playful way I do.

Daddy seems a bit hung up about rules.  He says "Cats are not allowed on the surfaces and particularly not on the cooker. 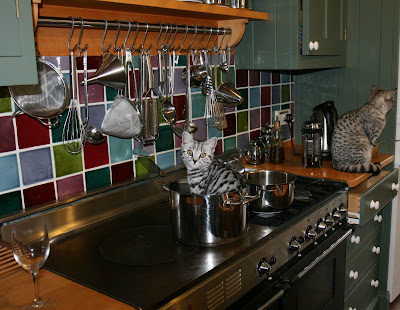 Hebe ignores him so I do too.

How the hell did we end up with a kitten called Spook?
Posted by Arabella Sock at Wednesday, November 25, 2009 9 comments

At last!!!! A Gardening Award where your vote really matters. Martyn Cox is providing an alternative to the stuffy old Garden Media Whatever Awards and is bringing to us the OMG Awards for excellence in the Alternative Gardening World.
Get straight over to Martyn's blog now and make your votes and nominations count.  It's free!!!!!
Posted by Arabella Sock at Monday, November 23, 2009 4 comments 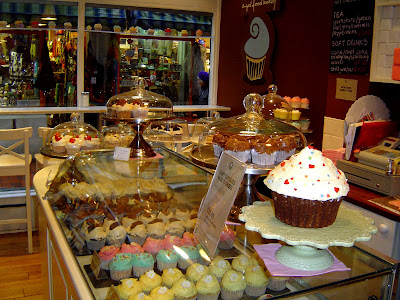 Sock feels sick.. and it's all James the Hat's fault. The Sock is terribly easily influenced by other people  (she went right off her favourite fuchsias  after a friend suggested that they were blowsy and common).  All this talk of cupcakes had permeated into the Sock's little brain so when the Bedsock suggested that after taking his visiting Mama to an art exhibition we just call into the Angel Food Bakery for a coffee it was, of course, impossible not to have a cake (or two)! Actually the Sock really fancied the Toffee Apple Cupcake and thought we had agreed to share that and a Chocolate and Orange  but to her absolute horror Mama Bedsock scoffed the entire Toffee Apple one herself so we had to buy another.

Now the Sock feels a little queasy after all that sugar - but it was worth it!

The best ever cupcakes the Socks have had were in a tiny village in the Blue Mountains in Australia.  The village only had two shops and one of those was a dedicated cupcake one which seems perfectly sensible.  Other than that the Sock, like James, remembers with great fondness the Lyon's lemon, orange and chocolate cupcakes of her youth although for us they were part of family picnic lunches not midnight munchies.

PS.  The picture is of the Angel Food Bakery in Brighton and that enormous cupcake in the foreground can be made to order.
Posted by Arabella Sock at Friday, November 20, 2009 12 comments

It has been bought to the Sock's attention by Fat Rascal someone who shall remain nameless, that the man voted most snoggable* in a poll of horticulturally inclined women and men, actually bears an astonishing resemblance to Terry Wogan!!!! 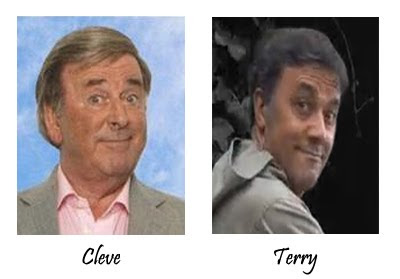 How easily our fantasies are shattered.. those thighs will sadly never seem the same again..

* of course the Sock wouldn't want to use smutty words on her nice bloggywog
Posted by Arabella Sock at Monday, November 16, 2009 12 comments

As promised The Sea of Immeasurable Gravy brings to you the latest trend to hit the gardening world - vampires!  As usual speakers on - the music (Jace Everett's theme to True Blood) is the best part!

Labels: Fangs for the memories

As we move into winter the Sock moves into holiday planning, her favourite way of casting off the S.A.D. with fantasies of warmer climes and happier times. The Sock is thinking about a few weeks in South Africa next August/September flying to Cape Town and taking in Hermanus for whale watching etc. and the garden route and winelands and ending with a wild life safari around the Port Elizabeth area. This is a very rough initial plan.

Does anyone have any recommendations of must sees and do's? Places to stay, reading material etc.

Wildlife and nature reserves
Photography -landscape, wildlife, plants and gardens
Food and wine although not necessarily fine-dining a seafood shack will do as well
Beaches and swimming (although the Bedsock doesn't do sharks)
A bit of culture and museums
Shopping

Family oriented places
Golf courses
Spiders, snakes, sharks, biting insects
Crowds
Roughing it - done that and now we're too old to be sleeping on the beach

The Sock is particularly interested in seeing places like Namaqualand which is "dry, rocky and desert-like for the rest of the year, but yields its floral wealth for a short few weeks in the spring in dazzling sheets of colour." We will be there at the right time of year but Namaqualand isn't on our envisaged route.

Return of the King 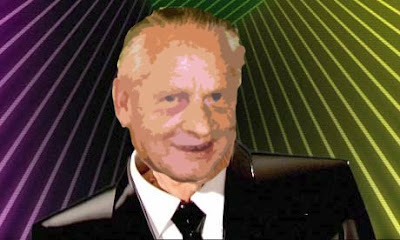 Rumours abound that Toby Buckland is about to be replaced on Gardener's World by a Max Headroom version of Percy Thrower. The Sock is ecstatic about this and would suggest that turning the rest of the team into vampires would also help draw in a younger audience.

And talking about which, the Daily Mail appears to think that Alan Titchmarsh could also be in the running...

clink for the link
Posted by Arabella Sock at Friday, November 06, 2009 8 comments

Yes folks it's that Sarah Raven time of year again! That time when we all peruse Sarah's lovely, lovely catalogues full of lovely, lovely things. You know that deep inside you really, really want her Chrimbo decorations so so just go ahead and treat yourselves.

"But what of the poor people?" the Sock hears you all ask. "Surely Christmas is also for the poor people - after all it's not like Mary and Joseph could afford a decent hotel is it..?"

So the Sock is coming to the rescue of the poundland shopping poor people and each week will show you how they too can have lovely, lovely decorations like Sarah's.

Unfortunately Sarah's lovely silver sprayed alliums (at only £12.00) are out of stock but the Sock will demonstrate how you can easily achieve this effect at home.

Step one -cut a dried flowerhead from the garden. If you can't afford alliums a garlic chive head will do as well. 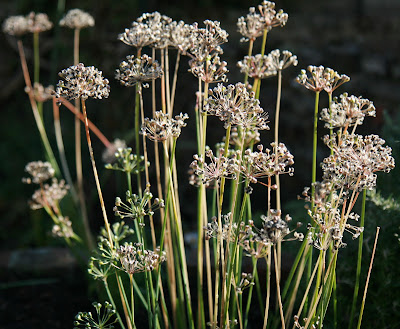 Step two - find the kitten has stolen the chive head the minute you turned your back so go and cut another one. 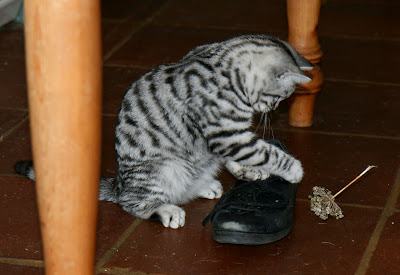 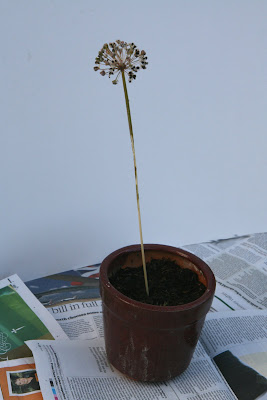 Step 4 - spray with a can old paint spray that has been kicking around for years - in this case the Sock used black to achieve a 'goth' effect but other colours can be used. 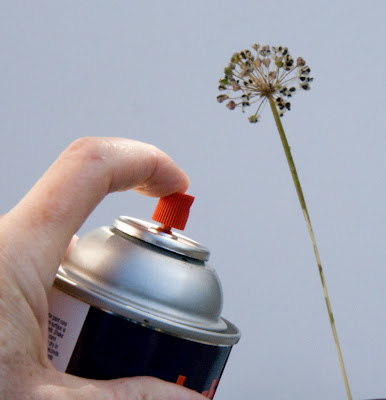 Step 5 - Et voila! A sprayed chive head that will look wonderful on your Christmas table. 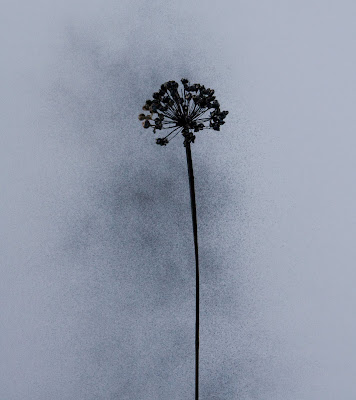 Step 6 - Try explaining to the Bedsock why you have got black paint spray all over the wall which will cost a fortune to clean off and repaint.

Next week the Sock will show the poor people how to make a lovely place name for the table for under 99p.
Posted by Arabella Sock at Monday, November 02, 2009 15 comments