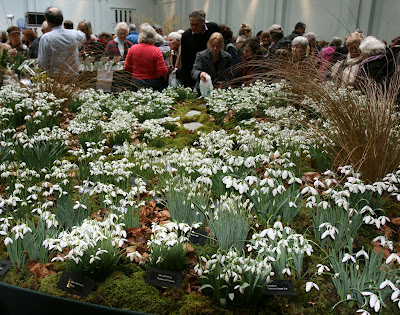 The Sock met the Mysterious Ms. B. yesterday for a wander around the RHS London Plant and Design show. This was the second year in a row so it is very nearly a tradition but whilst the gossip and the giggling surpassed last year's, the show itself was somehow just very slightly disappointing.  This may be less to do with the show than the fact that for the Sock the energy of Spring seems to be still lacking. Whilst last year there were shoots of excitement stirring enough to start the spending season, this year the joys of purchase eluded the Sock and only a small replacement aeonium and crassula made it into her haul.  Last year's fabulous hepatica displays seemed to have been replaced with the ubiquitous snowdrops and there was nothing with a real wow-factor.

The Sock was in competition with Ms. B. to bag the best photo of someone's hat - in the event Ms. B. spotted it and the Sock got the picture, a good joint effort.  Amazingly, it bears an uncanny resemblance to the 2009 vintage.. 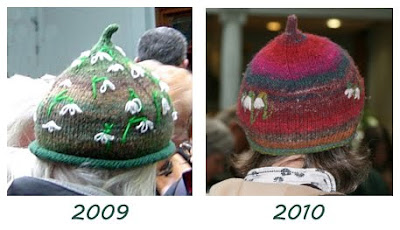 On to the Lawrence Hall to view the garden designs.  Overall the Sock found these fairly dull - there was nothing wrong with them but nothing new or exciting either.  Ms. B. felt that both the lighting and the possible colour of the houses (duck-house blue) suppressed the mood.  The one below was our favourite but for some reason even the planting in that looked sombre. 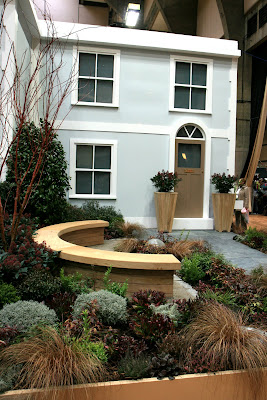 Next the balcony gardens with a theme of 'predictability' 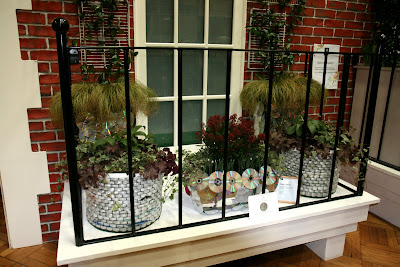 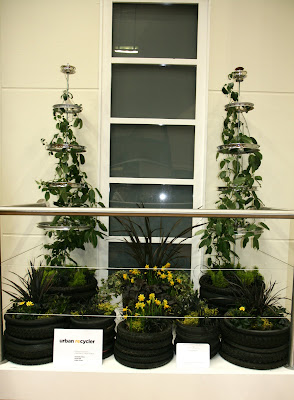 There was nothing wrong with these balconies - in fact you might well be proud to own one - but they just seemed 'same old' and didn't stimulate the Sock. 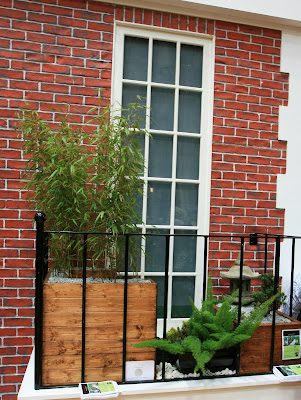 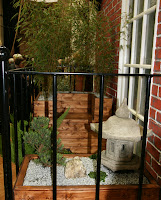 Viewed from the side you could see a little seat hidden within the bamboo surround.


Ms B. agreed that neither of us would be able to squeeze our bottoms into that small space but nevertheless a good idea.

No visit to a show is complete these days without a visit to the Heucheraholics stand.  Even the heucheras looked less bright than they will later in the season but Sean and Jooles made up for that with their bright and cheerful smiles and T-shirts! 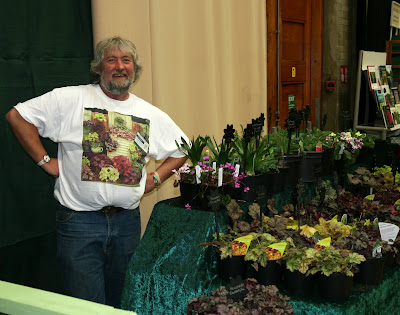 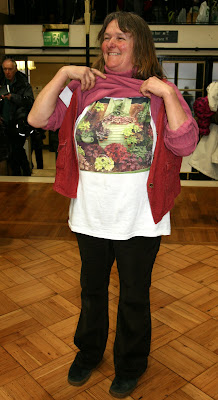 Next year the Sock must remember that the Lawrence hall sports a balcony where lunching ladies can view the comings and goings in the hall below.  A great spectator sport and the ideal place for celeb spotting! Clic on the picture to enlarge... 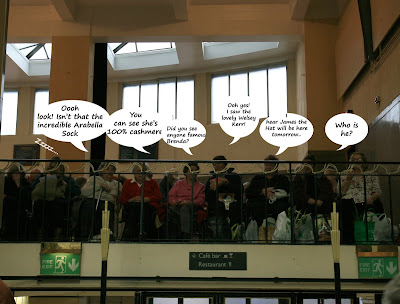 Thank you Arabella. You make me feel much better about not going!
I wonder how early you have to get up in the morning to bag the front row of the balcony...

I didn't want to be unduly negative as it was worth a visit but not necessarily worth a trip across the country to see. It will be interesting to see what others thought.

I didn't go because I thought it would be similar to last year and I was billy no mates to go with this year.

I thought the Hepaticas were one of the highlights last year, together with oodles of balcony sitting :)

Are Sean and Jooles going to Malvern?

Just had a more detailed reading of your excellent effort after looking to see how much my drivellings mirrored yours!

I loved your balcony ladies Twitterings!

LOL Ms B. Now people will know that everything on the SOIG is true now that our posts have verified each others.

VP. I think Sean and Jooles are doing the entire rounds of the flower shows again. There is usually a list on their website. I am certainly they will be at Malvern.

Hear hear... the atmosphere seemed quite subdued, more so than last year, and I agree with you about the balconies. I thought the rules said that the plants needed to be grown within 25 miles too, but one balcony was boasting its plants were from Chichester... one for the ladies on the viewing platform to ponder.

Do you think the RHS should hold these shows at the weekend, so that more children/non retired people can come? The RHS could do with an injection of energy.

On the plus side, Hardys had a gorgeous new hellebore. I might use it as inspiration for a hat.


There were a lot of 'older' people there - I'm not entirely sure whether the lack of 'energy' was to do with that or the weather and the fact that winter has just dragged on too long for everyone. They were much the same crowd as last year's I think which did have more of a buzz about it. Having one show day falling at the weekend could be a good idea to bring in a different set.

I agree with what you say about the show. Sounded great on the RHS website so I raided my piggy bank for enough to get the train from Cheltenham.

V. disappointed when I got there. Really sombre atmosphere except for one or two frantic ladies buying plants like the end of the world was nigh. Chatted to a couple of interesting nursery owners and shared a moment of moaning about studying garden design with the Merrist Wood students, but that was about it.

Commented to a friend it's what I imagine a WI tabletop plant sale to be like and I think your final photo kind of sums that up. Wish they had more on design but then I am biased!

The "lack of energy" you describe was certainly not evident on the balcony when a table was vacated. Usain Bolt would have struggled to get a seat competing against flailing sticks, flasks of tea, packed lunches and other paraphenalia.

I like how Ms B has now been dubbed 'The Mysterious'.

I have visited the February show once or was it the January one - can't remember now and that was in 2004, before it became the London Plant and Design Show. I was in raptures over the snowdrops and hellebores then and would be now. Would consider going again but it is a expensive day out. Glad that the heucheraholic stand brightened up your day. Did you come home with another pen?

I agree, Arabella - a bit of a curate's eggy type show. The gardens and balconies were eminently forgettable, the snowdrop displays eminently predictable and the hepaticas we all craved for were rather crammed into a little corner of Ashwood's exhibit.

I'd been there all day Monday, too, attending and speaking at the Floral Seminar, for exhibitors and judges, so by the time it got to Tuesday pm, I'd had it.

I note that the heucheras failed to wow you, this time. Could your love of them be starting to fade??? Might gabions fall our of favour at all, soon??

Also, did you clock the South African restios and things of the Fynbos? Lovely stuff, that was!

I must say, the balcony looks like a downright scary place. They could all be knitting and waiting for the heads to roll ...

I didn't actually mean to be anonymous, I just forgot to put my name in!

Anna - no I didn't get another pen although I still use last years one and it is my favourite!

VP - I never 'interview' people as such because it would mean I would have to try and look intelligent plus remember what they said at the same time and this kind of multi-tasking is too much for me.

LOL James and SS, these WI women are fierce!! My mum used to rope me in to help and jumble sales and they have specially sharpened elbows to stab you out of the way. And boy can they move fast when they see a free table!!

I think that everyone really wants something more out of this show - the first of the year should really enthuse and engage you and this didn't. Perhaps our expectations were too high. I'm sure people would pay to see a bigger show with more design and gardens in it. And maybe some talks/lectures going on at the same time. Something cheerful a job for 'Three Men...' I think.

Nigel - no I haven't fallen out of love with heucheras and I have plans for a summer display that I know will convert you to the cause!
I didn't consciously clock the S.A. plants, must have been too busy gossiping!

Your Heuchera people have a very sparkly tablecloth.
Is it to distract the attention from the plants?

I noticed the ladies on the balcony: I think they may be the same ones on both days. Do you think that if you are sitting in,for example, row three and a space suddenly opens up in row one then you are allowed to rush forward and bag it?
Or should one hover on the edges giving the current occupants steely glares waiting for an opening?
Or are the places passed down through generations and if you sit there without the correct antecedents then you get pitched over the rail into the display of winter flowering Iris?

Life can be so complicated sometimes.

The sparkly tablecloth bears a distinct resemblance to Lia's Christmas hat! I wonder if it is another thing that has been recycled.

I think the best (although not necessarily correct) thing to do whilst trying to grab a seat is to wait until someone looks like they are stirring and then rush over and get as much of your bottom onto their seat as you can. In the event they were just jiggling around trying to get some circulation back into their buttocks, this will prove rather embarrassing, so you need to have nerves of steel and a thick skin.