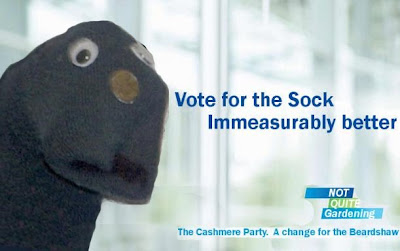 The winds of change are blowing offshore at  the Sea of Immeasurable Gravy and the Sock is surfin' the tube.
A new wave is coming and it's 100% cashmere!  We need a paradigm shift in government and the Sock is the one to facilitate this.

The Sock is all for democracy so we need some individual group think to work towards an integrated solution cabinet-wise and the Sock has sought the help of the Black Fingernail (who has something of the night about him). Here are some initial thoughts for candidates

Secretary of State for Environment - Peter Seabrook aka 'Chemical Peat'

Minister without a clue - Joe Swift

I think you need an Ideations Director. Everyone seems to have one at the moment. Well, toothpaste adverts do. I don't know what they are but they seem very enthusiastic about things, so perhaps a job for Carol Klein.

And where are you going to consign the Dark Lord Mandelbrot of Mordor?

I would have thought Christine would be more suitable as Chief Whip.

Oooops, forgot Clever West as Minister for the Olympics after that recent photo of him as young athlete of whatever year ti was.

Rob - Lord Mandelbrot is being nailed back in his coffin even as I type.

Great idea HappyM or should I say great ideation.

Christine Chief Whip - I wish you hadn't conjured up that image Ms. B. Although you have made up for it with the Clever West proposal.

You'll have to have a Compliance Minister - every public body seems to have lots of them. It's something to do with Political Correctness, or possibly, Elephant Safety, but I've yet to find out what they really do. If anything.

That would do for the Vampire, surely.

Surely there's a suitable role for Mutt and Jeff?

I already feel more secure knowing the Madeley will be defending our borders. It's the hair. You can feel confident with that hair. Just don't let Judy near any red buttons - not with those hands.

Do I get an outfit? with velvet breeches and Lisle stockings.
And maybe a stick with a silver handle.
And a really really big lacy jabot.

You shall need a Minister for Northern Ireland by the way. I will put myself forward most humbly, I don't think anyone who doesn't live here should have to listen to the nonsense that comes out of Stormont. Most of the time I ignore it myself - so very embarassing, our MLA's.
After lengthy inter-party ignotations I have received my countries nomination.

I don't have any nominations for you as my brain is still residing in a flu-based fog .... but your posts and the other comments did cheer up a rather grotty day for me! :)

James A-S, You get the full Fauntleroy clobber in purple velvet and a mace too if you want. And enormous buckles on your shoes.

Mutt n' Jeff will naturally form the Health and Safety Executive particularly if we can wean Jeff off his 20 a day habit.

Compliance Minister - sounds like the very essence of evil to me. I may have to move Sarah Raven into this position.

Nutty Gnome - I'm glad you enjoyed the blog. I'm well and truly fugged too. Is it the flu or the SAD time of year? I had loads of ideas for blogs but can't concentrate or motivate to do them, or anything else much. I want some chocolate.

Dear leader,
I shall get to work right away argueing with anyone around!

J. Le Chapeau seems to have a bit of a thing about Lisle stockings. It's a worry.

Flashbacks---> check out the songs!

I just had to peek at his myspace - a nasty shock first thing in the morning, although I did laugh at this under his 'influences'

Hugs and kisses to you both