A Farewell to Worms 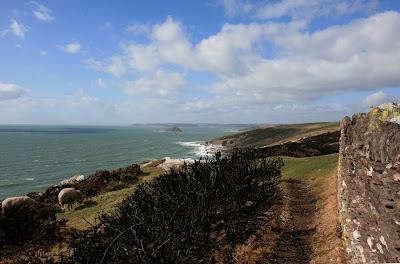 The picture has nothing to do with this post it is just to remind the Sock that on our last weekend's walk there was actually the first sunshine of the year!
You can't say the Socks haven't tried... we gave it three years and came close to divorce on more than one occasion. (see previous post here)  Now the decision has been made  - the wormery has to go!

The Socks have always done their best to be  'green', recycling bottles (and there have always been a lot of bottles) years before the council forced their eco-edicts on us.  Let the Sock cite just a few of her eco-credentials...

The only place to connect a water butt was in the side-passage in full view of the back window. The Socks bought an oak barrel butt in the hope it would look more attractive than the plastic ones (but also because they brought back memories of the Sock's grandad's garden where they always seemed rather exciting and mysterious).  The main excitement provided by the oak butt is that in hot weather it needs to be kept two-thirds full otherwise the wood slats shrink away from each other opening gaps that let all the water run out!!!!  This makes it impossible to use at the main time you would want to use it. It does contain some mysteries though like:
The condensing boiler

The Socks replaced their old boiler with one of the then 'new' condensing boilers amidst assurances as to how cheap to run, efficient and environmentally sound they were.  The Socks chose one which had gained a Design Award.  Clearly the Award was based on the way it looked (small, oblong, boiler-like) because for the first two years it failed to perform properly, banging loudly at intervals which would make the house vibrate and the Sock and cats jump out of their skins.  Six inches deep of correspondence and many irate phone calls later all the program boards were finally replaced which cured the problem.  Not that anyone ever discovered what exactly had caused the banging.   The condensing boiler sends out a plume of steam from its exterior outlet and as this was in the early days of their installation the Sock was forever getting word from the neighbours that her kitchen was on fire!

Worse was to follow.  The next-door (terraced) neighbour had a condensing boiler installed and the outlet for the plume of steam placed in such a way that it invariably blew straight into the Sock's study window giving her a faceful of warm, wet, air whilst trying to work.  The Socks paid for the neighbour to get the outlet relocated.

The bathroom was being refurbed so obviously the Socks went for an environmentally sound toilet - not that we had much choice.  This toilet has two flush buttons - hold one down for pee and two for poo. Unfortunately the flush for poo is so inefficient that it requires at least three flushes to even get a piece of paper washed away wasting far more water than ever the old flushing toilet did and necessitating rather more peering down the pan to see that everything has gone than one might wish.

The Sock could go on but we will be here all day once she really gets into her stride and we were supposed to be talking about worms.  So back to the wormery.  As you may remember this was the Bedsock's project and he really did try. The first lot of worms disappeared without a trace and were eventually believed drowned in the sea of fluid produced from too much veg rotting too quickly.  A second lot of worms were acquired, loved, nurtured, fed expensive treats, the Bedsock providing a balance of veg and dry stuff to prevent them drowning.  But drown they did...... in a sea of writhing maggots which had taken over the wormery much to the Sock's disgust. Worse than that the wormery with its writhing cargo of larvae, grubs and  the occasional worm had taken over the shed at the Bedsock's insistence they be kept warm over winter.  This not only prevented access to the shed over the winter months but also resulted in the loosing of some of its inhabitants over the Socks gardening equipment.  After some divorce-inducing domestic arguments the wormery was eventually put in last chance saloon. Another batch of worms bought, more expensive worm treats and conditioner, quite frankly we couldn't have done more for them.  After being told off by the Bedsock for chucking in too large indigestible chunks of waste food the Sock spent more time dicing veg for them than on her own suppers!  Every time the lid was opened to give the little wrigglers their food the Sock would get a face full of flies.  And what did the ungrateful worms do?  They buggered orf to the bottom of the wormery and drowned themselves again.  Three strikes and the wormery is out.


So. Farewell then
wormery
As Winston Churchill said
We are all worms
But I believe that I am a glow-worm


* rat-tailed maggots (hoverfly larvae)
** put a few pieces of charcoal in. NB. DO NOT empty the whole of the Bedsock's BBQ bag in whilst in a fit of pique.
*** nail a fine net mesh over the top
**** this would seem to be Arabella's job.
Posted by Arabella Sock at Friday, March 05, 2010

I was trying to think of something funny to say about you preparing food for your annelids along the lines of the "Diet of Worms" (one of the few bits of 16th century German history I can vaguely remember). But I couldn't, so I won't.

Those unintended consequences are always lurking and ready to pounce. Your worm bin story illustrates beautifully why there is no bin under my kitchen sink or anyplace else in the house. Yikes! gail

Don't get me wrong: I like worms.
I admire their earth moving habits.
I applaud their soil aerating and mulch munching qualities.
I greet them with a cheery 'Hello' whenever I come across them.
I lovingly relocate any I find sprinting across paving keeping a wary eye out for any marauding Robins.
I enjoy making children go "euuuggghhhh" by slurping them into my mouth like strands of spaghetti **
But...
I don't really like wormeries. Mostly because the mouthful of very small flies is not exactly welcoming but also because the results are completely disproportionate to the efforts required.
I believe that your life will be improved by the absence of wormeries leaving more time for cats and filling scrapbooks with neatly arranged pictures of Chris Beardshaw

** I never chew and always restore them to the earth. The same effect can be achieved by sticking snails to one's face.

Fairly recently Gardening Which reviewed wormeries & bokashi bins (which I was thinking about getting to supplement compost bin) & I think the conclusion was essentially that they are both a great fag to keep up properly & not worth it for most people particularly as more local authorities collect food waste.

Our loo has a handle for flushing and you're supposed to hold it down longer if you want more water, which is just as useless.

Our wormery has yet to be set up as we were waiting until we'd moved - it is currently sitting in the garage pretending to be a potting table. It sounds as though it should stay that way.

SS - that is the only bit of 16th century German history anyone can remember.

Gail - if only somebody had warned me in advance!

Ms. B. You are the person who should have warned me in advance!

Juliet - I really do think it has been a lot more trouble than it is worth. We always seem to have a huge amount of veg waste but even at best you could only put a small amount into the wormery at a time so we were still "wasting" stuff. It did produce prodigious quantities of fluid to be used as fertilizer but it had to be used when the doors and windows were closed as it smelled dreadful!

I only gave my wormery one chance. Oh blimey, it was awful. I did everything right, I'm sure, but they just died and then stank, and I coulndt face doing anything with them for ages, so they smelt even more when i finally did. Rank.
I was thinking of giving it another go actually, but you've reminded me...
Bokashi, on the other hand, I love. It works brilliantly, and doesnt involve slaughtering hundreds of innocents.

Some friends gave me their wormery when they emigrated ..... a bit of a severe way to escape a wormery, but I now understand why!
I've had the same problems of smells, flies and suicidal worms, so I've given up too!

With you on the loos. Our new, water-saving one is profligate with water but bad at flushing.

I've never felt the need to get any closer to worms than finding the odd one or two when digging. Composting, it seems to me, gets on perfectly well all by itself, wormless or not, and I've never really understood the point of growing one's own worms, unless one did an awful lot of fishing.

The rat-tailed maggots are one of the joys of having a water butt. They're huge fun and get really quite large and forbidding, when mature.

We, too, have one of those useless water-saving loos.

And our recently-installed condensing boiler (would surely burn 20% less gas I read) actually burns just as much gas (kwH-equivalent) as the 20-year-old one it replaced and leaves the house colder. We have spent most of the last 3 months swathed in sweaters. Pah!

Our wormery is in the outdoor side passage, which is just beneath our bathroom window. Last summer, we kept thinking the cat had done a whoopsie in the bathroom or that there was a problem with the drains, as the room smelt like an open sewage plant. We had no idea where this vile smell was coming from. A few weeks later I noticed liquid seeping out of the wormbin. Turns out the smell was the so-called 'worm tea' - I had to syphon this putrid liquid out of the base, which was liberally laced with dead worms, and watered it over the garden. Bad mistake. The garden smelt horrid for days and the children refused to go outside.

I don't know much about wormeries having always tended to stick to big fat compost heaps in the 'if you build it, they will come' mentality.

However, I do know something about loos. The problem is the design of the bowl - you need one that funnels down to a significantly smaller opening at the base to get significant suction. I know this because one of ours doesn't. It takes around three days to get a small piece of toilet paper to disappear and anything more than a tiny pee is therefore banned (harsh, but fair).