both were appearing on different days at Grand Designs Live over the weekend.  Obviously in the end it was a no-brainer...

but unfortunately it turned out the Socks had a prior engagement on the day Badgerman was appearing so they went to see 3Men in their inaugural performance instead.

Grand Designs was at Excel at London's Royal Victoria Dock an area the Socks have never explored before and doubtless never will again.  A frisson of excitement as we drove past the Millenium Dome, a landmark we have only viewed from above before when flying over London on our return from distant lands. Then into the drear of Docklands and the soulless emptiness of the Excel centre itself.  Except it wasn't empty - it was full of zombies which shouldn't have been surprising as the whole place was reminiscent of the mall scenes from 'Dawn of Dead'. 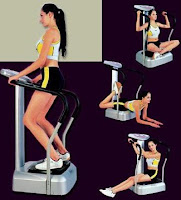 As well as stealing a march on the Malvern 50 and seeing 3Men in advance, the Sock was quite looking forward to the Grand Designs Exhibition itself.  Memories of the Ideal Home Exhibition visited as a child when the Sock got to meet a real Dalek and spent a lot of time fascinated by a doughnut making machine.

The reality was an extraordinary amount of stands selling various different home gym machines that you stand on and vibrate your weight away in different ways   (Apparently Madonna uses one!!!!) Watching wobbly bottomed people wibble about on these was hypnotically horrific! (The Sock, who was luckily wearing a bottom-covering top confesses she did try one just to see and it felt slightly unpleasantly weird).  Worse, there were various different chairs that were vibro-massaging some of the living dead and even one that seemed to be sucking in the incumbent zombie so that it appeared to be eating him!  Shades of Dr. Who again and an unpleasant futuristic vision of a world with no space for proper outdoor exercise populated by TV-watching zombies in fat destroying furniture!

The Socks survived these horrors (remember zombies move without speed or intelligence) only to come
across this!!!!!!!!!!!!!!!! 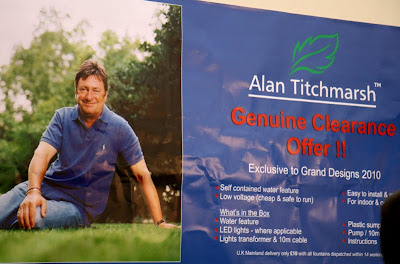 Then at last we came upon a little oasis of happy humanity.  A small and intimate theatre stand where a crowd of living beings were amassing to watch the very first performance of 3MenWent2Mow. 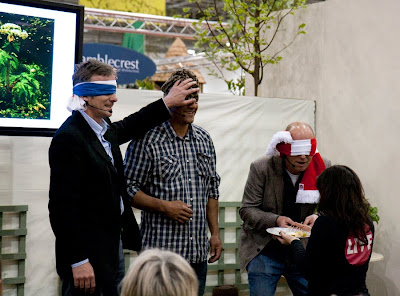 The Sock thought it was brave of the 3Men to start their performances at such a venue where, unlike a show more specifically aimed at gardeners, passing punters wouldn't necessarily be drawn in.  The Sock needn't have worried, the audience seemed happy - although it was possible a proportion of it was made up of Joe's relatives.  The Sock won't give away too much about the 3Menwent2mow routine other than both the Socks very much enjoyed it.  Joe was funny and loud, James was confident, charming, charismatic, and Cleve, lovely Cleve reminded the Sock of what Jackie Wilson said "I'm in heaven, I'm in heaven, I'm in heaven when you smile".*

And then it was over and the Socks snuck off before the 3Men could discover exactly who it was had interjected Chris Beardshaw's name into the performance....

As the Socks were about to leave later in the afternoon they caught the end of 3Men's second performance in the large theatre area.  Just as the Sock thought she would escape with her mystery intact the Bedsock checked his tweets and reported that Arabella "would be in serious trouble" if she didn't say hello. There was nothing for it but to introduce myself.....

And that dear reader is as much as you are getting! You didn't really think the Sock was going to share her precious 3menmoments with all and very sundry did you?  No - she will just report that she was well and truly hugged by two out of three lovely, lovely men and she will hug the memory to herself.  Let us just say that the Sock was very glad that for a moment she let her cashmere disguise slip..........

* the Van Morrison version of 'Jackie Wilson said' obviously
Posted by Arabella Sock at Tuesday, May 04, 2010

Ahh - you have had your huggy-wug at last. Unfortunately, the last line of your post has brought about visions of Jocky Wilson in my mind :O
http://www.youtube.com/watch?v=5Ao9p3ou7-U

Picture of you on JAS blog - you cant hide much longer!!

Thanks for sharing your cashmere 3menwenttomoments. Please, watch out for zombies. I've heard they make your stockings run... or, at least, the feet inside them.

Is there a photo of James in your hattywat?

I'm sure you must have been wearing one!