The Kitten Diaries Part 6 - June is busting out all over

I told my twitterfriends that I was off into town to buy myself a cupcake, a pretty, pink, princessy one all surgary sparkles. I intended to twitpic it for the delectation of those who had urged me on in my enterprise but in the shop a rather plainer banana and white chocolate cupcake caught the attention of my taste-buds so I was forced to buy a pretty pink, but unfortunately named 'whoopee pie' as well. For the uninitiated whoopee pies are apparently the new cupcakes. The cakes were carefully packaged so as not so smudge their cream topping and I carried my delicate cargo gently back to the Sockmobile.

Driving home I pondered on how much better Spook has been over the past month - either he has become more lovable or at last the deep wound of Luka's loss is healing and I have become more able to let Spook into my heart.  He is still incredibly annoying and naughty but has gained a certain soft sweetness which means it is impossible to be cross with him for long. Usually. He is very affectionate, jumping onto my shoulder and muzzling under my chin before spoiling the effect by nipping the end of my nose with his sharp little teeth.  Spook will spend ages carrying objects around the house and leaving them in piles at my feet in the hope I will throw them for him to retrieve. Concentrating on my computer I did vaguely notice that he was trotting in and out of my study for a while but it was only when I later looked down that I found a little pile of my best designer earrings at my feet! He had somehow prised the top off the little shaker box I keep them in and with unusual concentration had bought all his new trophies to show me!

The main improvement is that he has stopped upsetting Hebe as much and is now a general rather than constant annoyance to her.  Hebe may well have been grieving too as she has lately returned to being much happier, lively and skittish chasing around the house with Spook in a playful way rather than moping and spitting at him.    They both love to be outdoors where she appears to be keeping an eye on him, joining his forays into neighbours gardens.   Unfortunately every minute they are out of my sight is one of anxiety and they are constantly called back for a cat treat in the hope this stops them going too far.  Spook can hear a fridge door open from several gardens away and comes belting across the fences, down the pathway, through the patio doors and jumps 3ft off the floor straight into the fridge balancing precariously on a cold shelf until he is scooped out and given his little bit of chicken.

So was I as I drove home with my cupcakes.

Two minutes! Just two minutes I left the cupcake box on the living room table whilst I went to the loo.  When I came back downstairs I noticed a box with puncture holes in it mauled and upside down on the kitchen floor where he had somehow managed to carry it! 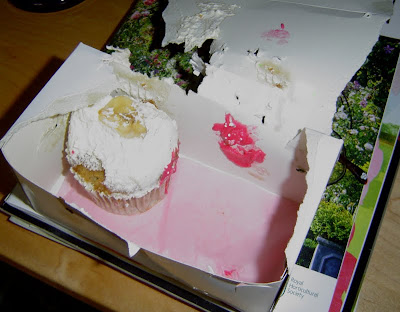 The cupcake I had so carefully carried home was crushed the cream smeared around the box.   The 'Whoopee Pie' whooped no longer. 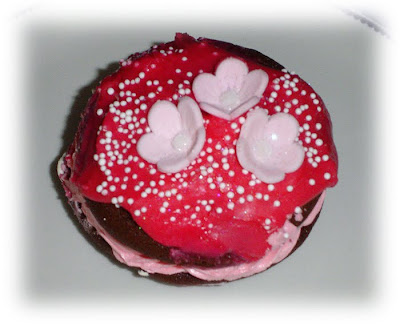 Did I say Spook was becoming more loveable?

I like it best when there is a window between me and Spook. 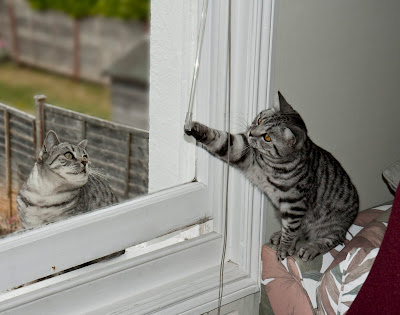 Whatever it was I didn't do it! 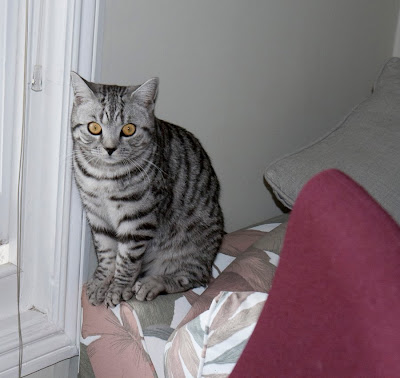 Oh la la!!!! I think we need to get that little kitty back behind bars!!

He was only thinking of your waistline!

Ahhh, but look at his little face - he couldn't have done it. You must have balanced them on the edge of the table, and then they rolled a very long way. The gnawing/clawing marks were obviously produced as little Spook tried to pull the cake box back onto the table for you. Probably.

I'm afraid Spook can do no wrong as far as i'm concerned Miss Sock! He and Hebe are utterly gorgeous, but, for heavens sake don't let Spook near Robs new parrotlet!!

He's obviously not all that keen on Whoopee Pies, so you should be safe with those next time. Posibly.

I'm not keen on Whoopee pies either - or at least not that particular one. It fails in being all princessy pink light fluffiness.

By coincidence there was a programme on R4 at the weekend about the rise of the cupcake in this country. Whoopee pies were also mentioned and apparently were name as such by either Quakers or Shakers opening their lunchboxes and saying 'Whoopee' when they saw some nice biscuits!!!