The Socks have been away for a week can you guess where? Here are some more clues

Time for a bit of reflection 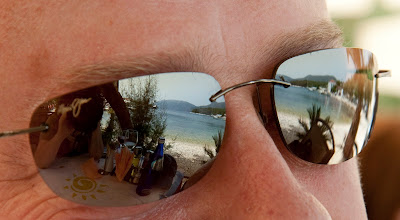 Boating to a little beach for a picnic of feta and spinach pasties, almond cake and baklava.  We ate that and we thought of Matthew Wilson. 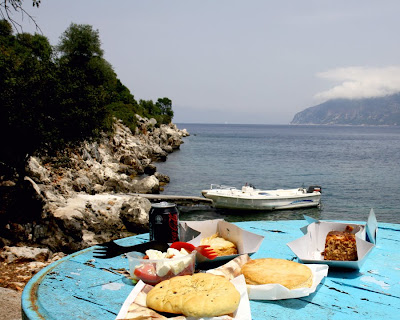 (The Sock couldn't remember exactly why Landscape Man is renowned for his love of Greek pastries but believed Emma T. might have something to do with it..)

Our house guest 'Arthur' so named because we ejected this rather large grasshoppery thing from our villa several times but given 'arf a chance' he was back in again, even scaling the wall, climbing over the roof and coming back in through the bathroom window. 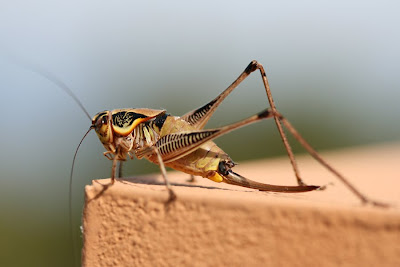 The Socks didn't really mind Arthur's presence brooding on the high ceiling - it was the idea he might suddenly drop off onto the bed whilst we were sleeping that was a bit unnerving.. 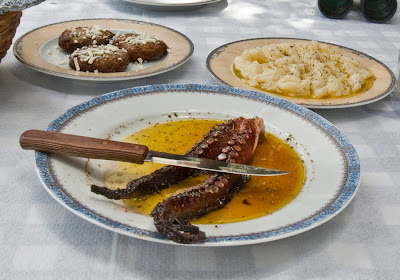 Boating through azure seas to our own deserted cove... 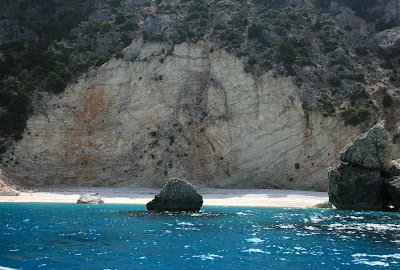 The pool came into our villa... 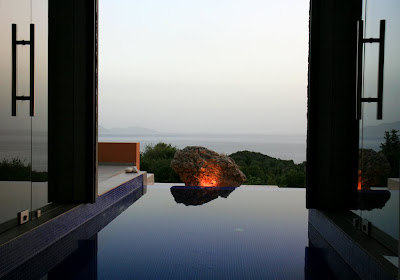 Sadly all just for one week.  Too short but it was originally planned to keep us going until a holiday in South Africa later in the year which we have had to postpone until (hopefully) next year.

So only just long enough to recover slightly from my previous meltdown to the inevitable one which will occur during this week as "the fence" project happens!!!  Fingers crossed everyone in the hope it all goes smoothly!

Torquay is lovely this time of year. Hope you get a refund for the damp in villa.

And here I was thinking Iceland is not all it's cracked up to be. You proved me wrong.

Grasshoppery thing looks like a lady bush cricket to me. Greek insects

Thanks Rob. If it was a girly cricket perhaps it had had babies in the house and kept rushing back in to get back to them. It really was enormous body about 3" and then long legs and antennae. Talking about bush crickets I have smaller rather more boring looking ones in my garden again and they have made lacework of the leaves of one of my plants!! I spent an hour picking them off yesterday.

Thanks, by the way, for your comment, on my blog, about the Queen. I did tell the Brit High Commission chaps that I had had a drink with her only the week before, at Chelsea, which is perfectly true. She has a regal handshake. Maybe that speeded things up a bit.

I reckon you've given us a big clue with the Greek pastries line. I'm gonna go for Greece, and the island being Anafi.

Captain Spaghetti and his mandarin!