The temperatures rising and it's not surprising 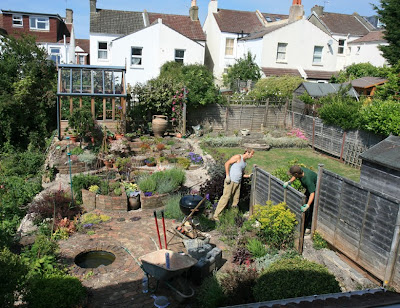 So the long feared fence project has finally started.  As previously mentioned after Landscapers No.1 let the Sock down (no doubt too busy with Chelsea - they got gold,  the Sock got shafted!) Landscapers No. 2 are doing the business.  So far they have come up trumps sending a range of delightful young men with very nice manners around.  Although they are trashing the Sock's garden they are doing it with great charm - makes such a difference!  On day one they bought the Sock a chocolate cream cake, admired the photos framed on her hall wall, loved the garden and accurately described it as 'mediterranean/cottage' which is exactly how the Sock thinks of it!

Next-door neighbours on both sides suggested that they would be happy to just have the one fence as boundary between our gardens which seemed sensible as they both had old, decaying and unsightly fences which will be replaced by my fab new one.  The only problem with this is that whilst at present the Socks have very nice, quiet and easygoing elderly neighbours, if/when they snuff it we could have people move in wanting to 'mess' with the fence we have paid for and we don't want to end up with a boundary dispute.  Still, not much choice really but to do it this way so there is no point worrying (yet).

It is very hot for the 'fencers' and the Sock has been slightly worried that one young lad would get heat exhaustion yesterday so went out and bought him a lollipop. He is actually a part-time PhD student and as far from the dreaded oiky builder types as the Sock could hope for.  It is still early days though and we will wait until they have finished to decide whether to award the company an accolade or a cowpat. 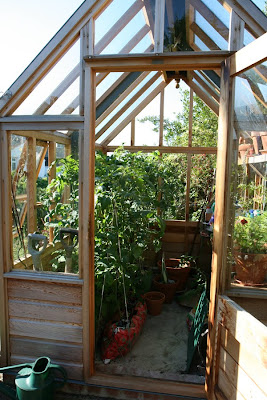 Elsewhere on the garden front, tomatoes have taken over the Sock's greenhouse.  One growbag of some large Italian type, one of Sock's favourite Sungold, one of the Bedsock's tomatillos and a small plum one beginning with S that Toby Buckland recommended.  The Sock has crammed the four growbags in alongside each other and has had to cut back some of the foliage to allow air to circulate.  Are they OK like this do you think?

Also the tomatillos have been flowering for a few weeks now but no sign of any fruit although the Sock isn't entirely sure what to expect from them fruitwise.

And just in case anyone thought that things were finally running a bit smoother for the Sock - they're back again!!! 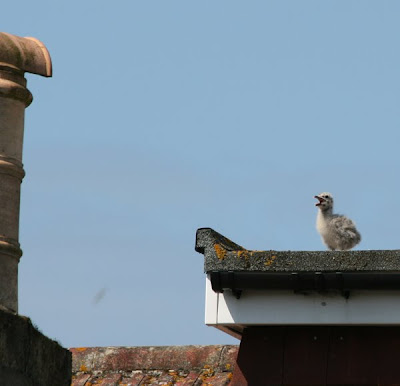 Yes - it's the evil gullbaby from hell!! A noisy freakin' fluffball ready to grow up and splatter the Sockmobile with seagullshit just like its parents did and their parents before them back into time immemorial!
Posted by Arabella Sock at Wednesday, June 23, 2010

Labels: they certainly can cancan

I think you'll be alright. I have never seen a tale on rogue traders which began "they bought me a chocolate cream cake?"

Re tomatoes; you look like your doing everything you should. Not wishing to teach my granny to suck eggs, but remove lower leaves to maintain a good airflow (and also later on leaves higher up to enable fruit to ripen) and don't wet the leaves. Blight likes a static,damp atmosphere so try to avoid if poss. Ventilate as much as you are able and feed (seaweed extract) when first few fruits have set.

I am growing tomatillos for first time, so didn't know what to expect either. The flowers seem to stay for ages, but some of mine are finally making fruit. The flower withers leaving the green sheath bit (probably has a proper name) attached to the stem with a tiny, tiny oval fruit inside. Hope yours do well.

I tried once and got nothing to really show for it - and I'm ok at fruits and veg growing.
Just everything else i struggle with`!
They grew allright, but not much of a crop.
Wouldn't bother again - same as aparagus peas - pretty but not much to eat.
anonjan

I read a tip on twitter that said damp the greenhouse floor to maintain a damp atmosphere without wetting leaves.

Gilly - we will have to compare notes on the tomatillos. I did a bit of 'paintbrush' fertilization just in case the bees weren't doing the biz so we shall see. The Bedsock wants them for his Mexican cooking.

The fencework is at the stage where I can see delicate plants being crushed underfoot and piles of rubble all around and the occasional clouds of concrete dust as they cut some of the old wall to neaten it off. Boohoo! Still 3 more working days to go after today.

Why does everyone have delightful young men in their gardens except me?

My tomatoes were crammed in my planters and squished together last year and did fabulously - hopefully they'll do the same this year as I don't have room for them not to be crammed. I also removed lower leaves, especially any which got yellow and manky.

The gullbaby looks deceptively cute, but the wv is impess, which may be an omen.

1. PHD student? Are you paying for unskilled/inexperienced labour rather than proper builder types?