Despite living in a densely populated urban area the Socks have a family of foxes resident on their terraced street.  Word is that they live in a disused house and garden on the upper part of the road but although we occasionally see three foxes at a time in our smallish back garden it is a pretty young fox that spends a lot or her time in the unkempt and overgrown garden next door.  I can see her from my study basking in the summer warmth in the open and despite the winter cold she seems oblivious to the grey drizzle and often curls up for a peaceful afternoon nap. 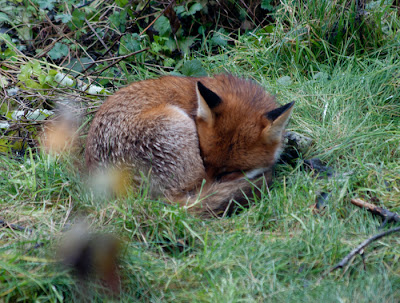 Hebe and Spook watch her too and often sit on the fence leering down at her. In the past, worried that the fox might turn on the cats, I have called them in with the promise of a treat from the fridge which always ensures Spook's speedy return as he rockets back into the kitchen.  Although the fox family definitely took an undue interest in a new neighbours rabbit run - all three turning up and snouting around no doubt hoping for a tasty supper - the foxes seem very wary of the cats even one as ridiculous as Spook.

I was watching the fox making ready for its nap next door when who should turn up but Spook.  He thinks he's found a new best friend! (Sadly my photos were taken quickly through closed window so not the best quality.) A new interest for Spook would suit us all.  He wore us out over Christmas with his constant demands to have things thrown to be retrieved, the need to supervise him at all times to ensure that our dinner didn't go the same way as the Stilton, the fact that the jigsaw took four times as long as it should have done due to him digging pieces out and hiding them under the sofa every time my back was turned! And Hebe would welcome a break from the fear of Spook hiding around any door or corner ready to pounce on her in a more than boisterous manner.  All in all a bit of fox friendship wouldn't go amiss. 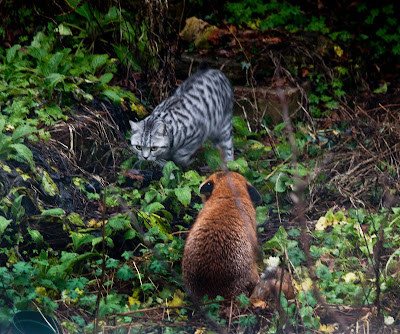 Spook wanders happily up to the fox and sits unconcerned very near to it. It is the fox who is spooked and after some vacillation 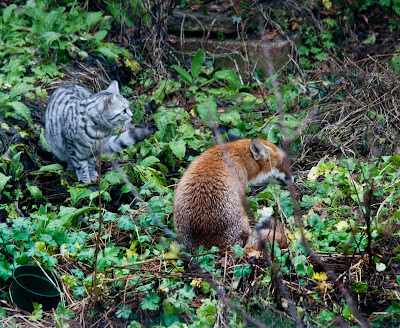 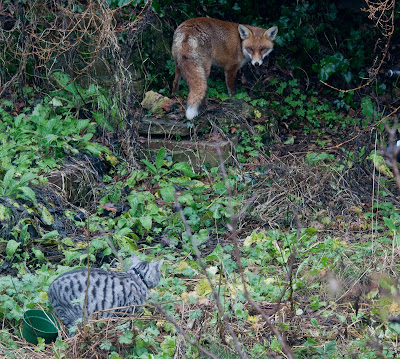 Poor Spook... nobody ever wants to play with him! This means I will have to make up for it by spending double time this evening throwing crinkly bits of paper for him to fetch.
Posted by Arabella Sock at Saturday, January 08, 2011

Lovely post and photos... Spook sure is one interesting cat! ha ha.

We have Foxes living nextdoor, and I too am in a fairly built up suburban area - 30's semis - we rarely ever see them out during the day though. In the past I've had a few close encounters with them around dusk as they come out in search of food.

Lovely to have them so closeby - although I don't appreciate them digging the garden up! :D

Nothing to say apart from liking the WV of "uncad" which, if it isn't, should be a word.

Actually I have got something to say. The "crinkled paper fetching" rings a chord. Our moggie specialises in Quality Street wrapper retrieval, preferring (should there be a choice) the purple ones.

BTW - when did the purple QSs, (which are shaped like brazil nuts), cease to contain brazil nuts?We're now fobbed off with common or garden hazel nuts

Hi Liz - I like to watch the foxes but I do confess to a worry about the cats particularly when there is more than one fox around at the same time. They look in good condition though so I think someone is feeding them but the fox population seems to double each year and eventually something will have to be done. They dig my garden too and leave their mess which is a bit much when my cats always use their poo tray.

Simon we bought Spook all sorts of nice toy/catnip mice etc. to play with but he would rather root stuff out of the waste bin in my study which he seems to think is his toybox. He likes stuff that makes a noise on the wood floor so Quality street purple ones (my favourite) would suit him fine! I haven't had Quality St in a while as the purple ones were the only ones I like so can't tell you when the great nut exchange occurred.

We have a family of foxes and a family of badgers living in the disused reservoir at the top of our garden. All the animals give our Ceefer cat a wide berth, so I think Spook will be fine!

I always thought it was some kind of honour to have a wild creature comfortable in my garden,that is until two adventurous fox cubs targetted our dustbins....
Yuk! facing the day treading through the entrails of your own bin is both disgusting and salutory.
So do watch out...
Loved the pictures - I'm sure the cat will have the upper hand , they usually do!

Very cute post and photos! so nice having wildlife vising your garden

Hi Nutty Gnome, most of the foxes around here are in very good condition and well fed so they don't have the motivation to fight for their food. Like CHris and Fer I do feel it is an honour to have wildlife visit my garden and can put up with a bit of digging - less so with them peeing on my salad bed! We don't have wheelie bins in our street (pavements to narrow or some reason) which means bin bags are often put out the night before collection and strewn all over by foxes overnight which is a nuisance. I blame the thoughtless people putting the bags out to soon rather than the foxes.

The sad fact is though that a growing population of foxes can't be sustained around here as we are pretty much at saturation point foxwise already. I wish there was some easy way to stop the females breeding without having to resort to a cull but something will eventually have to be done.