Out of the Box

.
All the woodland path is broken
By warm tints along the way,
And the low and sunny slope
Is alive with sudden hope
When there comes the silent token
Of an April day,—
Blue hepatica!
Dora Read Goodale—Hepatica.
Winter boxes the Sock in - a combination of SAD, the sort of drear, grey, cold weather that puts paid to even the slightest glimmer of enthusiasm at the idea of being outdoors and a surfeit of apathy.  As the Sock's first social/horticultural occasion of the year, the RHS February London Halls event was as eagerly anticipated as the Chelsea Flower show!  To be honest it is not really 'showy' but for the Sock, what the RHS Halls lacks in interest (and it does lack), it makes up for in the sheer joy of being let out of the box!


First a little note to the RHS. DON'T EVER DO THAT STUPID THING WITH THE TICKETS AGAIN!
Arriving at Lindley Hall to meet friends I was told that I needed to wander around to the Lawrence Hall to pick up a ticket despite producing my RHS card for free entry.  This totally confused me (and everyone else) as it had never happened before and also seemed completely pointless with everyone grumbling about it. Given the show attracts a lot of very elderly people being told to drag your zimmer even the short distance to the Lawrence Hall and back to get a ticket is really not on.

Clearly a little grumble like that wasn't going to spoil our day and we bagged a table at the upstairs coffee bar for a quick chat with Simon (who had already "done" the two halls in the space of 45 minutes which he said was because it was early enough not to be crowded but in my opinion was more likely to be because they weren't that interesting), Michelle, Victoria and Lazy Trollop.  When I said quick chat I meant that some of us stayed for a longer gossip - by the time Helen and her partner turned up we only had a short time to race around the Lindley Hall before meeting up at the Lawrence.

It didn't really need much time.  There were two 'show' roof gardens neither of which I found that inspiring although Hugo Bugg's one did have a fab living wall composed mainly of sempervivums which I love.  I couldn't help feeling that a real eyecatcher would have been to have created a mini 'Gherkin' out of sempervivums and silver sedums to reflect the one in the background skyline and form a focal sculptural piece for the garden. 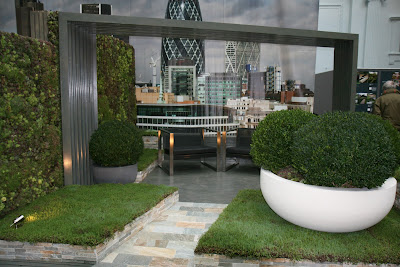 This outdoor room thingy was created out of fake grass.  Unfortunately my accompanying Beardibum thought it was one of those flash Parisian toilets and had to be quickly stopped from taking a leak in it. That particular Beardibum won't be let out again for a while. 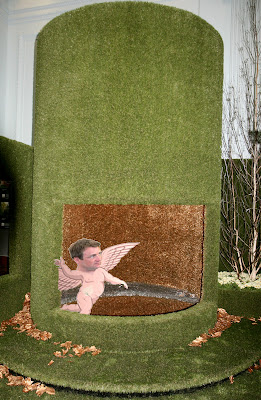 Then on to the Lawrence Hall to meet up again on the 'biddies balcony' so called because they all sit up there in rows with their packed lunches.


It was a disappointing year for hat wear at the show but to our absolute delight we spotted the 'Snowdrop hat lady' (see this blog from last year).  This year she was with 'Snowdrop-hat lady No.2' !  I wonder if more Snowdrop hat ladies will turn up next year - perhaps they will divide and expand exponentially and in a few years the halls will be entirely populated with Snowdrop-hat ladies. 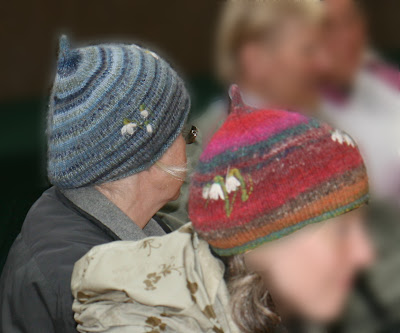 I was pleased to see the happy smiling faces of Sean and Jooles at Heucheraholics again. Even though it's not the best time of year for heucheras their display always looks bright and cheerful.  Friends living in France will be interested to know that Sean & Jooles won a first prize at a French Flower show at Courson October 2010 south of Paris knocking the two French heuchera nurseries into a cocked hat! (In this case a bicorne hat like Napoleon's rather than the usual British tricorne conjured up by the saying.)  I say "Well done" to Heucheraholics - a proud day for the Brits and no doubt your OBE's will be forthcoming. 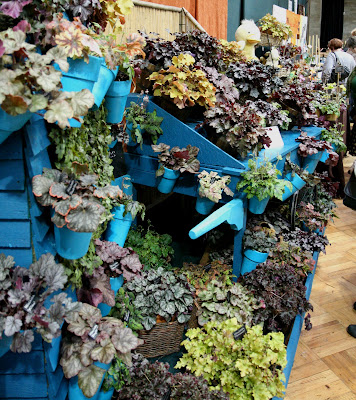 The loveliest thing at the show (apart from the Sock herself obviously) was the gorgeous, to absolutely die for, hepatica display from Ashwood nursery.  Such beautiful colours and flowers - even the foliage is fabulous. 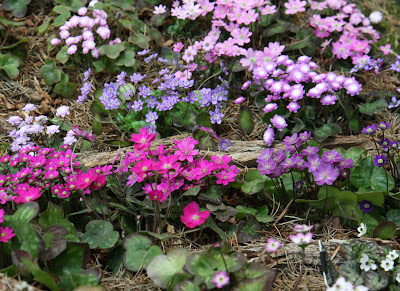 Sadly I didn't buy any because the two I got from the show a couple of years ago disappeared very quickly and I don't know whether they are just a bit tricksy or  I just don't have the right growing conditions. 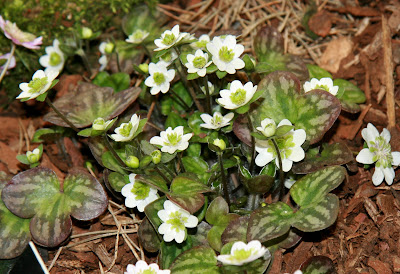 So all that remained of the day was to clear off to the pub for a few hours to be picked up a little 'tired and emotional' (but very happy) by the Bedsock on his way home from work.
Posted by Arabella Sock at Friday, February 18, 2011

Thanks for that update. I've been away for a week and couldn't get to show but really don't feel I've missed it - or indeed missed much. Please someone tell the RHS to stop doing these ridiculous garden installations and get back to letting more small specialist nurseries back in

45 minutes ! As long as that I must be slipping.

Yes, echo your sentiments re tickets; absolutely daft. I could understand it if it was done to prevent multiple visitors entering using the same ticket but it didn't & consequently made no sense.

Deeply upset you don't have a balcony shot.

thanks for showing me what I missed and to be honest despite meeting up with the gang I am glad I didnt trek all thaat way if the show isnt that interesting.

It seemed crazy to me that the Lindley Hall was half empty, while the Lawrence Hall was packed. Surely that tells the RHS something? Why not put the bookstall over in the Lindley, along with the RHS shoppywop

I am sorry I came over all unecessary when I spotted the double snowdrop hat brigade; I don't get too much excitement in my life

I lovethe idea of the snowdrop hats multiplying every year just like the real thing ;)

Sean told me those tents are the new model that will be used at the outdoor shows later this year. I'm not impressed - not roomy enough when everyone's rushing to hoover up anything which can be bought.

So glad you liked the e-card - it was very hard to select one to send. I tried very hard to leave clues so you'd know you weren't getting spam :)

Here's hoping we can find a certain person's email address...

I've had a great laugh at the "Snowdrop Hat Lady" as she has appeared regularly on a gardening forum I use. In your blog she is photographed with her mother.

The lady in the hat promised to get knitting so you will have something new to see next year.

In Ms Sock's temporary absence May I welcome Emma (Snowdrop Hat Lady)& Paddy; you have brought us great joy. I am already looking forward to next year's show.

Not only have the snowdrop hat ladies given us great joy, it's marvellous to see their guest appearance in the comments :)

Hi Emma and Paddy - what a lovely surprise! It always makes me smile to see Emma's snowdrop hats next year we will have to say hello in person!