The Hazards of Huskies 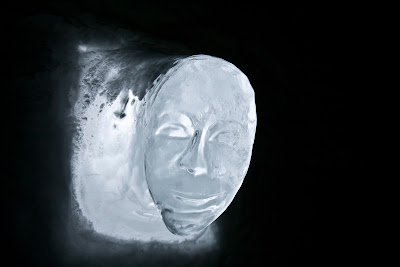 And so we come to the last in the Sock's 'Northern Lights' trilogy. Having survived a night in the Ice Hotel we are up and out early having wolfed down a huge breakfast and several cups of coffee at the really rather good breakfast buffet.

It is another lovely crisp sunny morning but temperatures have dropped even further and there is a slight wind making it feel colder. The Socks are pleased that they have inserted little packets of handwarmers into their gloves that heat up throughout the day like miniature hot water bottles. The days activity is a 'Moose safari by Snowmobile'! A small group of us are taken on a 60km trek out into the snowy wilderness.


The Sock is sharing a snowmobile with the Bedsock as driving her own for three hours would be too physically tiring.  As it happens clinging on to the back of a snowmobile driven by a Bedsock who has gone "a bit Top Gear" is pretty tiring too! The minute we emerge from the winding, undulating, tracks of the snowy forests onto the flat frozen expanse of river he is fully revved up and gone - zoom-zooming over the ice with the Sock's tentative suggestions that we might go a little bit slower unheard and unheeded.

Later we do finally slow down enough to see some moose grazing in the forest but as nobody has paid attention to the guide's instructions to keep quiet, the loud exchanges of "Why have we stopped?", "There's a couple of moose over there", "Where?", "They WERE over there!" frighten the creatures and the Socks only get to see one large moose's backside before they clear off.  Not to worry though, the main purpose of the day has been the snowmobiling and a chance to get well into the wilderness.  It has been great fun finished off with a late lunch of stewed reindeer and mashed potato with lingonberry sauce at the guide's lodge.

After a great night's sleep in a warm and comfortable bed the Sock's are off on another adventure having kept the best 'til last.  Husky sledging! 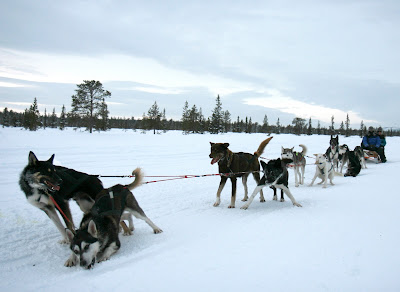 Again we are going with a guide but we are lucky that on this tour there are just the two of us with the sledge to ourselves. The trip information has given us a warning that the huskies tend to 'go to the toilet' on the run and that for this reason it is inadvisable to wear white trousers.  The advice is well informed because the minute we get going so does Husky no. 2. who unfortunately appears not only to have eaten a large breakfast but also one that disagrees with him as for the first ten minutes he has permanent squits!   The Socks give thanks that we are seated right at the back of the fur covered sledge as anyone sitting at the front (and the sledges can take up to six people sitting astride) would be likely to get caught in the blow-back.   Everytime the husky releases another salvo he turns his head around and grins widely at the Socks, clearly well pleased with himself! 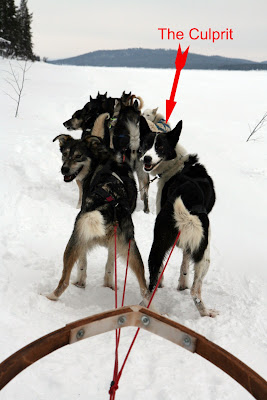 Just when the Socks thought the dog had at last emptied himself the guide stopped and decided to swap Husky no. 2 with Husky no. 5 right on time for the latter to decide it was his turn to go!  Husky sledging is a beautiful, exhilarating experience in this fabulous, strange, snow-clad landscape but my memories of it will always be laughing so much at the dog's doings. 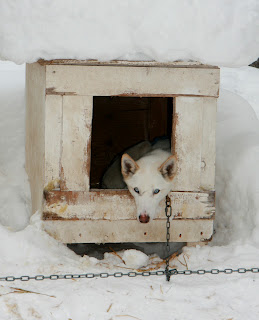 Our 40km round trip takes in a lunch stop which the guide cooks up for us at a wilderness chalet - this is again the ubiquitous stewed reindeer with mashed potatoes and lingonberry sauce. 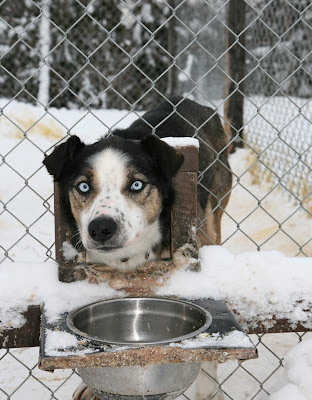 On our last morning at the Ice Hotel we take a wander around inspecting the creations of people who have opted for the two hour Ice Sculpting activity.  Guess which one the Sock made? 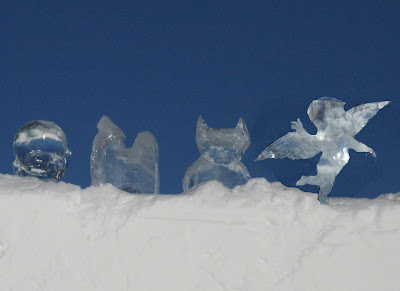 What a wonderful adventure! I imagine the husky ride was a little frangrant too?

Luckily we had balaclavas covering everything but our eyes and a hat on top of that so we were well protected from the smell of huskies.

It was an adventure - so weird to think it was only a 3.5 hour flight away to be somewhere so incredibly different and isolated.

that last dog is the scariest dog I have ever seen....

I am so enjoying your holiday posts: I don't like cold places but I do like looking at them so you've given me a real treat! Thank you!