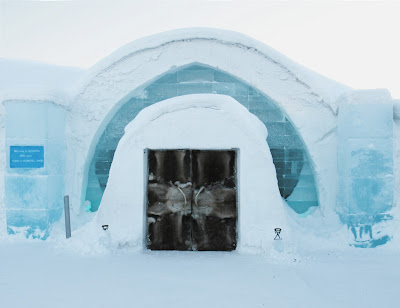 We arrive at the Ice Hotel a beautiful bright day, delphinium blue skies above crisp, gleaming, white snow - even the air around us literally sparkles.  Sadly my ME has prevented us ever going skiing so the Socks have never experienced these levels of snow and cold but we have learnt not to dwell on what we can't do and concentrate on what we can do and over the next three days this will include a night on ice, snowmobiling and husky sledging! After all how fatiguing can these things be? Pretty bloody exhausting as it happens! The Sock had underestimated the sheer effort of continually moving from 'cold' to 'warm places' and the work involved in dressing in and stripping off the heavy snow suits and boots provided and our multiple layers of clothing under that!

We have chosen to spend our first night in the Ice Hotel itself and after that move into one of the warm lodges on the site.The Ice Hotel is open each day until 6.00pm so that visitors can view all the rooms after which those brave enough to sleep over in the -5C interior temperature have the Ice Hotel to themselves. (Click on any of the pictures to enlarge.)

The entire Ice Hotel is constructed each winter from blocks of pure ice cut from the frozen waters of the adjacent River Torne melting back into it late the following Spring.  There are three types of rooms Snow Rooms which are very basic, Ice Rooms and then the more glamorous and expensive Art Suites. We have opted for an Ice Room which are quite beautiful but all the same design and this turns out to be a good decision. Each of the Art Suites have been individually carved and created by different artists, some are exquisite and fantastical but others feel a little claustrophobic. We spend a happy hour or so marvelling at them but had we been staying in one, the Sock would have spent the whole day angsting over whether we had been allocated one we really liked!

The Bedsock was particularly taken with the Ice Car Room (yes that is the Bedsock and not some marauding Cossack!) he is sitting on the reindeer skins that form the bed in the car! 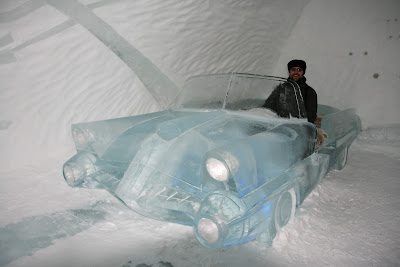 This room could be retitled 'OldiSocks and the Two Bears' 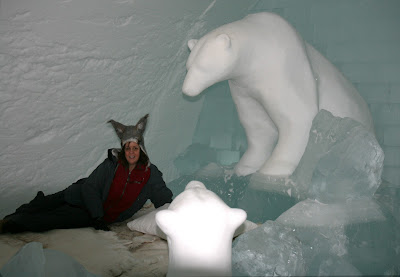 the amount of details put into many of the rooms was fantastic as was the way the lighting picked up different colours in the ice. 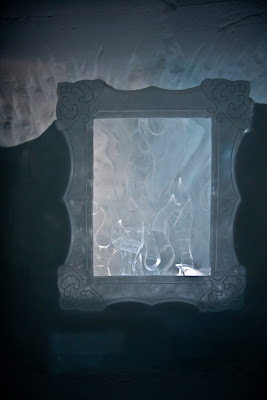 This room design was based on the contents of a fridge! 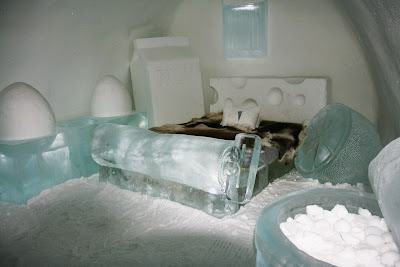 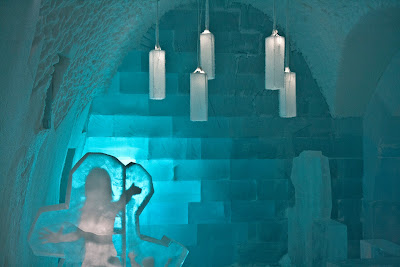 which came in glasses made of ice 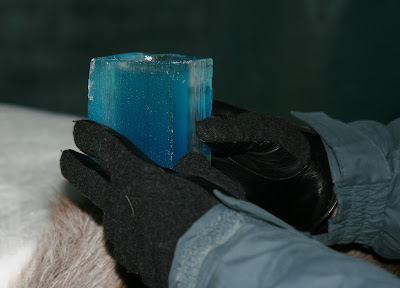 Peeling off the top three of their many layers of clothing the Socks enjoyed a lovely six course meal in the warm restaurant.  The only course not served on a plate of ice was the very tasty ptarmigan and reindeer tongue!

Warm, full, slightly inebriated and happy the Socks made themselves ready for the ordeal exciting experience ahead.  We had decided that sharing a double sleeping bag would be romantic and collected it from the warm Dressing Room just outside the Ice Hotel itself. Guests were advised to strip down to their silk thermals to sleep in, then don a jumper and boots for the quick dash through -30c exterior temperature to their overnight accommodation of a 'warmer' -5c. Our room is pictured below from our daytime visit - you don't get to see the unedifying sight of the Socks running to it through the snow corridors clad only in their undies, boots and hats! 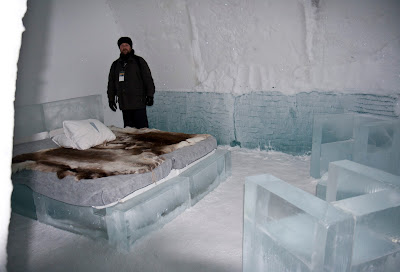 Nor do you see the ensuing tussling panic as the Socks threw the enormous sleeping bag onto the Ice bed fighting to get into it as quickly as possible.  It was every Sock for themselves - as demonstrated by the Bedsock who, struggling to get the bag over his head, somehow wapped the Sock hard in the jaw nearly dislocating it!  There followed much howling which eventually dissolved into a more than frosty silence - the romance of a double sleeping bag being much wasted! 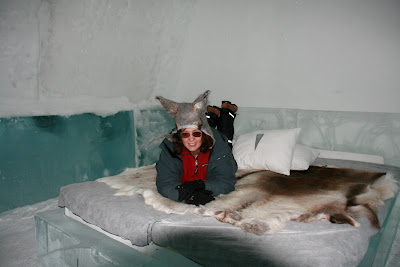 Although it might be possible to get a good and comfortable night's sleep on an ice bed this did not happen for the Socks.  The combined heat generated from the thermal clad Socks alternately left them soaked in a hot sweat which then turned to ice each time they shifted position and the -5c air seeped into through the top of the bag!  The Bedsock lay in a sleepless stupor for some hours wishing that we had done as some other sensible guests and also booked a warm room to escape to.  The Sock spent some hours wishing she hadn't drunk so much with dinner as a visit to the toilet would involve a run back and forth through the freezing ice corridors to the Dressing Rooms clad only in her undies and boots.  Guests are given a severe warning before using the rooms that they MUST NOT PISS IN THE SNOW and that telltale yellow signs will be noted!

Eventually the Socks drift into a semi-stupor to be woken the next morning by 'room service' with a glass of hot lingonberry juice and the relief of knowing that the rest of their nights will be spent in a lovely, warm, comfortable conventional bed! 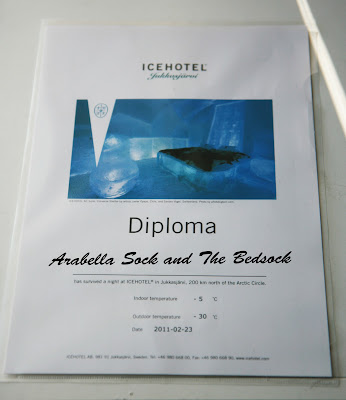 I'm sorry I laughed through much of this post. It must have been very amusing to watch you. I have often fancied staying in a ice hotel but now I dont so that is one aspiration firmly got rid off - thanks

I am so jealous it hurts - probably almost as much as your socked socky jaw! It is lovely to see the Ice Hotel from a guest's perspective, and even though you paint a very realistic picture, it still seems wonderfully beautiful and I would love to do it. I would not do the double sleeping bag though - have done this once camping in England, and I got in such a huff I got out and shivered under a woolly blanket.
Have the best time (not sure if you are back yet?) and remember - you never eat yellow snow - first rule of survival I learnt whilst living in the alps...

I think the mistake was defo the double bag. We could have controlled the temperature in single ones a lot better and had more wriggle room. Some people we met did say they got a really good night's sleep in the Ice rooms.
I'm glad we did it though and actually being in the IceHotel is quite an amazing experience in itself.

One of my aunts went two years ago, after just having had a triple bypass. She said she slept very soundly - and then she went on to skinny-dip in hot springs followed by rolling around in the snow! I'm amazed she didn't have another heart attack.

Beautiful photos, but not a holiday for me.

I'm with PG - I've always wanted to stay in an ice hotel too, but as my ME precludes flying I've never managed it. Now I'm thankful I haven't! I'd still like to see it though - looks incredible. I love the ice car.

Double sleeping bags are always a mistake - that's one I have made, and never will again!

What an absolutely FANTASTIC experience. All that hot/cold/hot must do something drastic to one's body. I'm with the Bedsock on the Ice Car. Did he make Brrrrm Brrrm noises when sittiing in it? Bet he did.

Wonderful pics, by the way, too. I want to go.

A few years back my artist daughter was one of those who created a room for an ice hotel - probably a brave move as she's shaved all her hair off a few weeks before. The worst part apparently was when someone chundered on their carved ice wall - and it stuck there.

I so enjoyed the tale of your experience!

I'm with Patientgardener, till now I'd thought it might be fun!

Maybe a new motto for you could be:

'The Sock Does It So You Don't Have To'

I'm frozen just reading this. What a fascinating experience which I have thoroughly enjoyed reading about. I am too much of a wimp to try it for myself !

It looks fabulous, but I am WAY too much of a wuss to spend the night in there!

Southern softie me! Brrr! brilliant pics, wonderful experience - best of all loved the prose 'delphinium blue skies' ...see you got the plants in there after all!

Exton Gardener - I laughed so much when I read your comment! The rooms are so pristine and beautiful and they make much of how pure the ice used is - so the idea of someone chundering on it is really quite horrendous!

I'm with Juliet on the double sleeping bags mistake. I reckon we could have got a decent nights sleep if we'd had singles!

JRo I could go with the skinny-dip in hot springs (like those monkeys in Japan) but not the rolling in snow stuff!!!

Chris, there is a particular blue delphinium colour with a hint of purple which is my favourite for flower and sky!