Woke up it was a Chelsea Morning

What is Chelsea for? 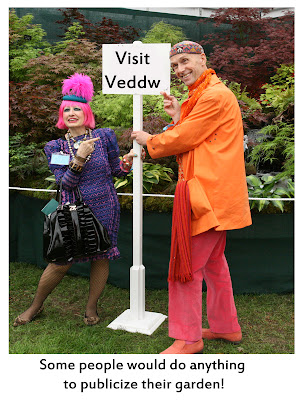 Chelsea - All Over the Show 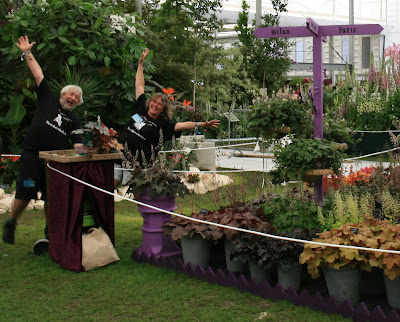 Heucheraholics are always at the RHS shows - in fact they are always everywhere there is absolutly no avoiding them!
Jooles and Jerry Hall 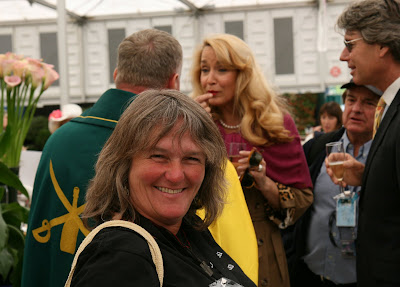 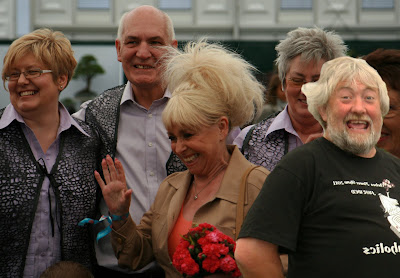 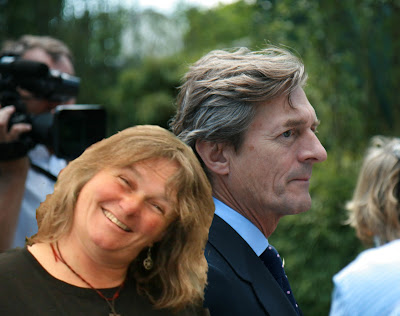 Sean steals the scene from LLB.. 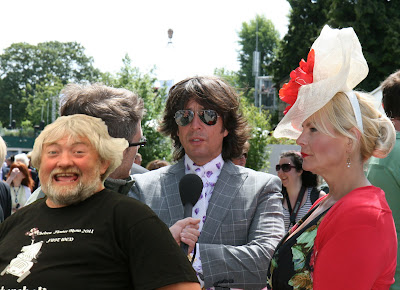 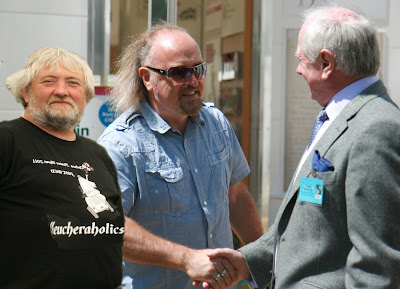 We know who the real Starrs are at Chelsea 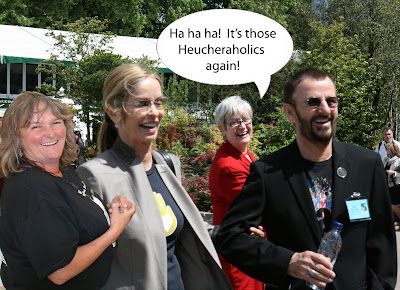 Sean and Jooles got Silver Gilt for their heuchera display.  They wuz robbed it should have been gold.
We don't yet know what took the edge off their metal. Could it possibly be to do with the fact that Exhibitors are only allowed one invite to the Gala Night Champagne shindig and  having lost the toss to Sean,  Jooles then tried to hide in the Plant Marquee avoiding the RHS bouncers. Finally she was spotted, found to be ticketless and forcibly ejected (in the nicest possible way) and  left outside to cry into one of the many glasses of champagne passed out to her? 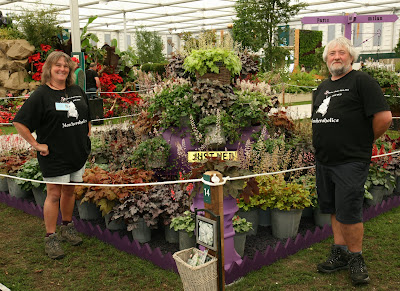 
Impossible not to notice the astonishing resemblance between Climate Change Farmer Mark Diacono and his twin brother Toby Buckland.  Must be something in the Devon water or perhaps they are both missing from the same village!
Posted by Arabella Sock at Tuesday, May 24, 2011 4 comments

Question1: Which of the above authors is the odd one out?

Question2: Match the author to the book description...

How to grow plants in pots - Loads of lovely pictures (as you would expect from Dorling Kindersely), a bit about aeoniums (which convinced the Sock she must have this book) and loads of useful advice for those of us with small gardens who want to grow veg in containers.  Ans: here

This book is the reason why the Sock has ended up with Oca, Achoca and various weird and wonderful herbs and spices growing in her garden.  They had better taste good or there will be complaints! Ans: here

This is an unusual and lovely concept for a book and reminds the Sock how much a garden still has to offer after sundown. Sounds, scents and soft lighting whilst the evening lulls the garden to sleep. A must for those who mainly get to see their garden in the evening.  Ans: here

"Why gardening makes you bad-tempered.." - Calm down dear - it's only gardening! Ans: here

Vote vote vote for the man with the hat!

[A more serious post from the Sock today - if you missed the Malvern mischief read the preceding three blogs.]

Today my copy of the RHS Garden magazine dropped through the door complete with voting forms for new council members.  Now if you are anything like the Sock you will have immediately torn off the voting paper and binned it because you are quite happy to let the RHS muddle on on its own dinosaur-like way because you think it does pretty well overall and all you are really interested in is the shows and gardens.

This year James Alexander Sinclair is standing for council - you can read about it here!  The very fact that he is standing at all has made the Sock think that actually she should take more interest in the running of the society and that someone like James can help inject some life and ideas into it, help update its image and be in touch with what the ordinary members who normally bin the voting forms want!


So please make your vote count.

And if you are not an RHS member why not?

You get free access to the fab RHS gardens at Wisley, Rosemoor, Hyde Hall and Harlow Carr plus occasionally to some affiliated gardens.
You get to attend 'membership day' at the shows (Chelsea, Malvern, Tatton, Cardiff, London Halls etc.) which is worth the membership fee on its own!
You get the Garden Magazine which at worst is highly skimmable and the Sock has found some lovely holiday rentals through the small ads section at the back! In this issue there is a timely article about honeysuckle by Nigel Colborn just when the Sock has been thinking about buying one..
There are loads of courses and events... the Sock could go on and on... but don't just think of what the RHS does for you - think of what the RHS does for horticulture, for education, for the country!!

Even if you fail to attend any of the events it is still money well spent in supporting this institution and the Sock believes with James Alexander Sinclair on the council it will be even more worthwhile!

The Full Monty Don at Malvern

The Sockerazzi was out in full force at this years Malvern show and a lot of people were very lucky to meet the Sock herself this year!!! 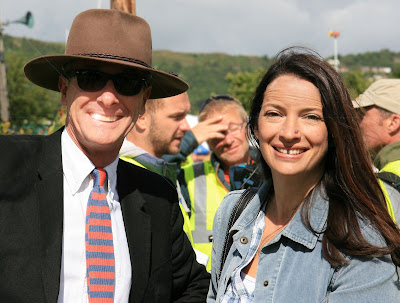 Chris Beardshaw was introduced to the Sock but was so overcome with the near proximity of Cashmere loveliness that he pretended not to know who she was!  The Sock was a little jealous of 'Mrs' Beardshaw's fabulous hattiewat 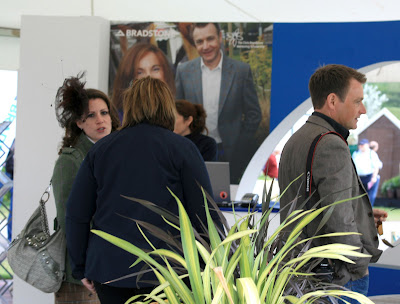 particularly on close inspection when it was apparent some of the escaped Beardibums had been used to decorate it!!! 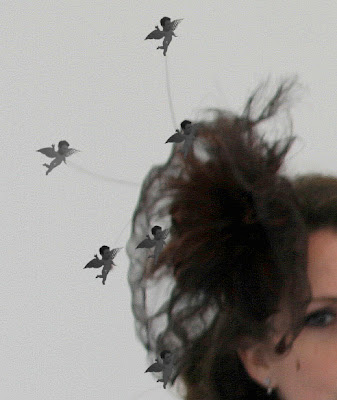 And of course you know the Sock will always get you a picture of gorgeous, handsome, sleek Matthew Wilson 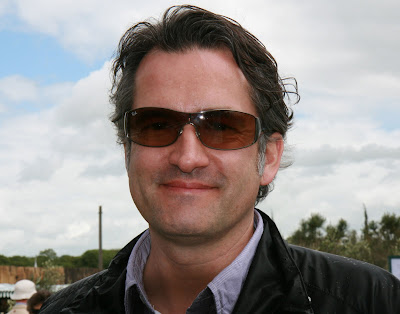 The Sock wondered whether anyone had guessed this accurately 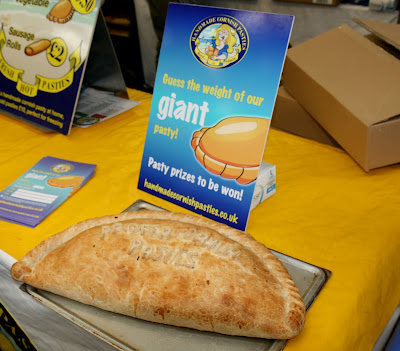 The Sock arrives back from a lovely few days at and around Malvern only to find this in the office in-tray!!! 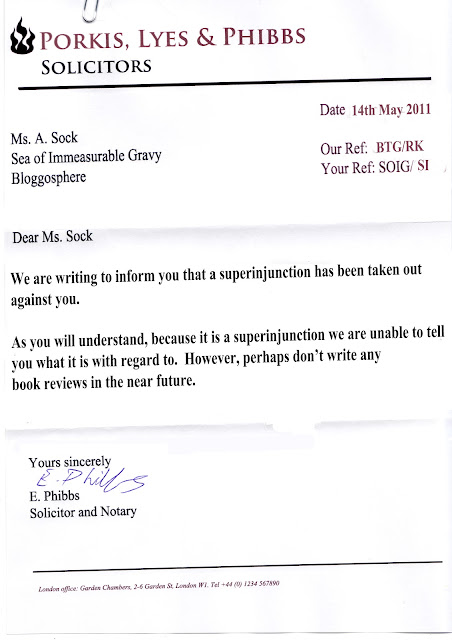 Uninvited guests at the Garden Party...

..
A few days ago my elderly neighbour (who is not the sharpest pencil in the case) told me that during the break for Corrie he had seen six dark shapes scurrying about his lawn just as darkness fell. RATS!!!!! we panicked, trying to work out which of our near, terraced, neighbours we could dump the blame on for this calamity! "They all came in from your side!" he accused "Yes but YOU saw them in YOUR garden" I countered "therefore they are YOUR rats!".  "They have pooed all over my lawn" he moaned holding exhibit A out on a shovel for me to inspect. 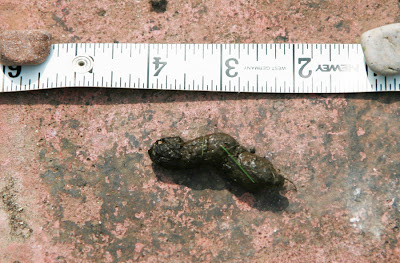 "They look rather big for rat droppings" I opined, photographing the offering and posting it on twitter for advice "unless they are alarmingly large rats!" We both shuddered at the thought and my neighbour agreed to phone me if he saw them again. Sure enough at 8.45pm the phone went and I rushed to my window binoculars in hand to try and make out the dark shapes tumbling around at the back of his garden. Foxes!! Little fox cubs climbing into his plant trough and rolling around digging the bulbs out - again. We turned our powerful torch on them as they piled in over my back wall, through the gap at the end of my new fencing and into their favoured play area.  At least one adult and three cubs - the result of the noisy fox-bonking that went on nightly in the early months of this year.

They return each night although we don't always see them - just the evidence of another party, some glittery blue, sticky, sweet discarded on my flowerbed, a knocked over pot, an annoyingly broken plant stem.  Then the Bedsock, off to work at 'the crack of', sees the party still going on as the morning begins to cast light on it.. the photos are rushed, taken through a closed window, but still show just what those foxes have had on the menu. 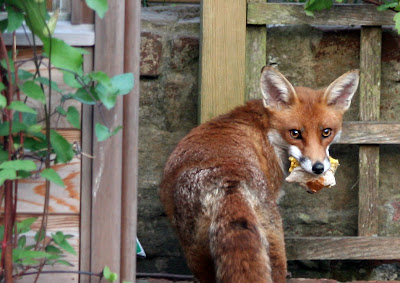 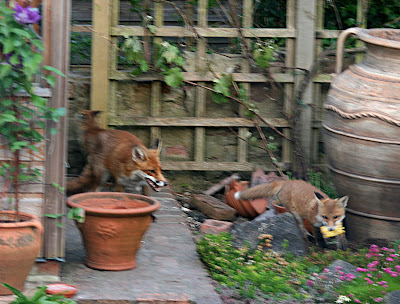 Drinks - the cub washes it down with water from the pondlet 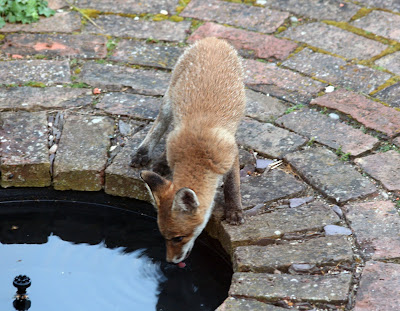 Fascinating as the foxes are they are also a real worry.  We live in an housing intensive, terraced area about a mile from the beginnings of open countryside.  The number of urban foxes is increasing substantially each year and the area can't sustain another four foraging for food.  Already the seagulls tear open the bin bags we are forced to leave out on the pavement and the foxes help distribute that rubbish further.  And whilst the cats are still happy to chase single foxes off what might happen if they are cornered by several at once?

At the moment I am more worried by the nightly incursion of bind weed from my other neighbour's overgrown neglected garden.  Removing the crumbling brick wall between us has allowed this nightmare to slither undetected under the fence, rearing its ugly growth in my border.  As fast as I remove this blight it finds another route in and my only hope is a daily vigilance to ensure it is removed as far as possible - but what will happen if we go away for a few weeks?

Foxes, bindweed, seagulls - there is always some garden intruder to be fought off! At least the lack of rain has substantially cut down on this year's snail population...
Posted by Arabella Sock at Wednesday, May 04, 2011 1 comments