Last weekend the Sock and pal Lazy Trollop went to wonderful Wizzers for a talk by James Alexander-Sinclair.  Although the Sock has seen James 'perform' on several occasions he has always been hosting an event or strutting his 'Three Men Went to Mow' stuff (latest very funny video here) so the Sock was looking forward to actually hearing James' musings based on his book  '101 Bold and Beautiful Flowers'.

The talk started at 10.30 a.m with a cup of tea but sadly no biscuits!!! There was definitely a slight rumble of empty tummies echoing around the hall not least from the Lazy Trollop sat next to me.  The talk commenced and James was as entrancing as expected, holding the audience in his thrall with his passion and wit..... all, that is, except for Mrs. Starchyknickers of Surrey at the back who suddenly broke in with  "I have NEVER heard so much swearing in a talk before!" uttered in a tone of whining prissiness. Crumbs! We hadn't even got to the 'stems entwined like the limbs of lovers enjoying a post-coital cigarette' bit!  All James' had said was that forsythias are horrible and we should get rid of the bloody things!   James handled the heckler with aplomb! He hardly missed a beat, apologising sweetly like a slightly chastened schoolboy. Then he carried on smoothly with a talk that perhaps lacked the more X-rated similes some of us have come to hope for!

Clic on the pic to enlarge 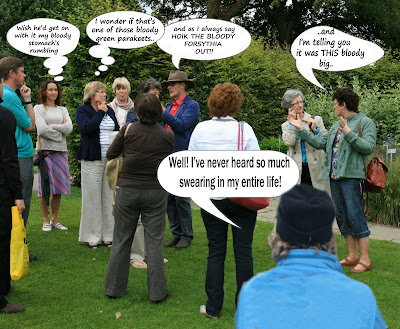 The talk continued until 12.00 at  which time we were told that James would also walk us around part of the gardens explaining where some of the planting principles had been put into action.  This was an unexpected bonus and after a pleasant lunch (and an enormous slice of Wisley Banana cake which was so big LazyTrollop and the Sock shared) a small group of us (sans Mrs. Starchyknickers) set off for a jolly jaunt around the borders.

First stop the new Rose Garden designed by Robert Myers.  The Sock isn't usually so bothered about roses - there is a formal rose garden recreated in a nearby park which is slightly tedious - but here the roses have been planted close together in blocks of colour and it will be interesting to revisit next year when the scheme has had chance to establish.  Now the main attraction for the Sock is the bold drifts of colour from the herbaceous plants.  The fabulous dark blue Agapanthus at the front is 'Taw Valley'. 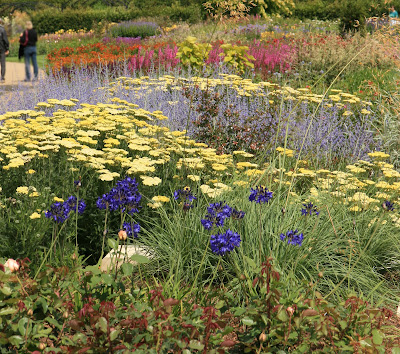 On to the Piet Oudolf borders running downhill to the lake and Glasshouse.  At first sight from the top these don't look particularly impressive but on inspection we found the most exquisite planting schemes.

Echinops abounded and this one 'Veitch's Blue' is a must for the Sock's front gravel garden.  Note the lovely little ladybird enjoying it too 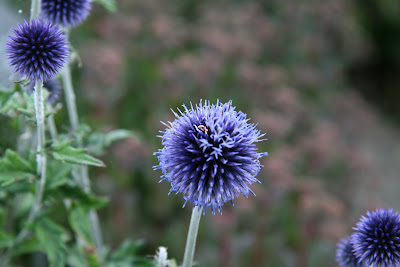 It looked stunning against the glowing silver of the eryngium 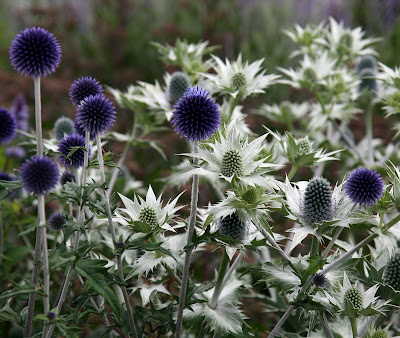 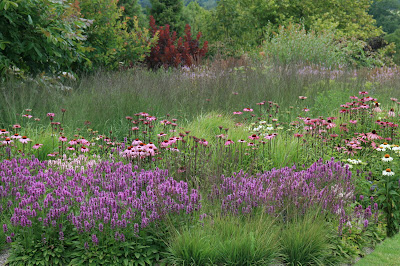 You do need to be a bit careful at Wisley there are some very odd people about...


The talk and walk cost £20 for members (more for non-members) and included a voucher for £5.00 to spend in the Plant centre.  Anyone who can visit Wisley without spending at least £10 in the plant centre must be a model of absolute restraint!

The talk wasn't full by any means and the Sock wonders if the price (the RHS set) put people off, particularly as the details on the RHS site and even on the day were a bit vague as to what was included.  Several people mentioned they might have gone had it been cheaper although at that point they didn't know the walk was included.  As a bit of market research perhaps readers could comment on this? Given we hadn't expected the walk and would have been happy to pay for the talk alone, the Sock felt we got a lot of James A-S for our money! (Actually the Sock and the Trollop also got treated to tea and a cake afterwards but don't tell the others as they'll be jealous!)

All in all a very good day out.  Also worth mentioning that the Sock didn't realise that there was a whole series of talks and events going on at Wisley and will be enrolling on one of the photography days later in the year.  Perhaps the RHS needs to look at the way it publicizes these things in order to bring them to more members attention?
Posted by Arabella Sock at Thursday, July 14, 2011

I was interested but first it was a trek and secondly I thought it might be the same talk I had heard James give before as wonderous as it was. I thought the price was quite reasonable

A terrible admission, but I am as tight as ducks proverbial. A tenner (& no voucher) & I would have been almost certain to attend.
Nice pics. tho.
Your comments re the Oudolf borders are interesting. I have always assumed that we have visited "at the wrong time" to see them in their true glory. Perhaps it was simply that we didn't get up close, although that somehow defeats the purpose of drift planting.

Price seems a bargain to me. I didn't go because I didn't know about it, but I'd loved to have heard Mrs Starchyknickers chuntering about James's swearing.

THe Oudolf borders are interesting. I saw them with LazyTrollop a while ago and she felt they would be better with a meandering path snaking through them so you could get right into them. Sussex Prairies which we visited last year did this sort of thing very well. James pointed out that the large central grass path leads down in a dramatic way to the focal point of the new Glasshouse. True - but the overall impression of them was that from a distance they look a bit uniform and dull.

Victoria - at first I thought Mrs Starchyknickers was joking and was waiting for a punchline which never came!! It wasn't so much what she said - fair enough some people really don't like others swearing - it was the slightly martyred way she said it. I don't think it was the only thing she complained about either although if it was about the lack of biscuits then I would have felt more sympathetic!

JD is me Arabella!!!

I can't imagine paying for a talk at all, tbh, much as I love James - I just don't find I take them in so it wouldn't be worth it.

I might (if I were an RHS member, lived nearer, and it started after lunch) be more tempted by a walk around the garden for £10 without a voucher or £15 with one ...

How did you hear about this, Arabella? I get huge numbers of emails from the RHS (including the members only ones as my parents have no email so I get theirs for them), but most of them seem to be about flower shows or growing your own veg.
*goes off for quick rummage through inbox*
Yes, I can only find one about events generally - clicking the link in it takes me to 406 results, and it's an awful palaver finding anything I'd both want and be able to do in that lot.

I know what you mean about not taking stuff in Juliet - I'm always pleased if only one idea sticks in my mind.

I think I saw James' talk advertised at Wisley itself on a billboard outside the plant centre. Then I checked online but I agree that finding things on the RHS website can be a faff. At the talk I collected a booklet of other talks at Wisley. I don't know whether they have any trouble filling them but it might be an idea to target members in the SE (or within an hour or so's drive of Wisley) with a flyer in with the RHS Garden magazine.

How lucky for you to be near Wisley and be able to visit so regularly. For us, it is something we can manage only every few years or so and truly love it when we can visit.

I can't remember if James' talk was advertised in it but the RHS does insert a garden events booklet within The Garden from time to time with it helpfully divided into events by region.

Of course this is only helpful to members or people who happen to buy the magazine (does anyone?) for a month when said booklet appears and agree a search producing over 400 results would put most (non) members off attending anything at all.

Would that I lived nearer! My sister keeps threatening to take me to Wisley next time I visit her - will have to see if I can do some cunning forward planning and coincide with a talk or event. Wonder how Mrs SK would react to hardcore swearing?

£20 seems to be an average ticket price for this sort of thing. Our trip to the garden Museum to hear Richard Mabey was the same price & we did not get a cup of tea. (When we arrived & saw wine set out in the garden I thought it was included but no such luck) The talk was an hour with fairly brief questions after followed by a book signing. In comparison James' talk was much better value. As the walk bit wore on it got better & better value then with tea & bun, well, I was made up as they say!

I think the price isn't too bad but I am sure it does put many people off, particularly non-members.

As to knowing what is on, it is a bit hit & miss; sometimes I read the magazine insert, often I don't.

MrB went on a Clive Nicholls photography day at Wisley a few years back (a really brilliant birthday pressie from my good self). Unfortunately it was one of the hottest days of the decade & he don't like heat. Enjoyable & helpful despite that.

I would have gladly paid double to hear James' talk! (And had no idea the word bloody is considered swearing, it seems such common usage over there across the pond, or so we thought.) The walk sounds delightful. Piet always gets my brain clicking with ideas, love the Echinops and Eryngium. We grow both, but not together.
Frances
BTW, I added credit for your fine photo from Malvern. :-)

I think the cost was reasonable - OH and I paid £40 each the other week to go to a talk at East Ruston, but we had excellent coffee and homemade cheese biscuits, and the talk and walk were followed by lunch, dessert and more coffee, so it probably works out at roughly the same.

Having said that, two weeks before that I had a tour of Beth Chatto's with the Head Gardener and it was free!