A Sea of Immensurable Heucheras 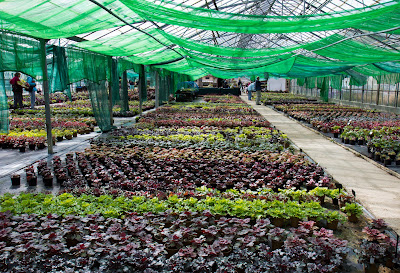 It's been a good year for the heucheras.. both those in my garden and for my friends Jooles and Sean at Heucheraholics who have reaped in the RHS riches of Silver Gilt at Chelsea, Gold at Hampton Court and Tatton and Best in Show at Wisley's recent Autumn Flower show.  They've been mentioned on my bloggywog so much this year its beginning to look like the Sea of Immensurable Heucheras.

So with the promise of tea, cake in Sean's elaborate hired tent, and a snoop around Heuchera HQ, the Socks made their way to the New Forest for Heucheraholics Open Day.   Somehow we had imagined a quiet leafy glade with a few polytunnels and tables with heucheras dotted around so were pretty impressed with the endless stretch of heucheras of every hue!

The Sock's personal preference is for heucheras in pots - a single one of the new varieties with large attractive leaves like 'Geisha's Fan' or a three colour combination looking bright all through the winter. They are at their best primped and plump in a pot or peeping over the edge of a border. The Sock is less taken with the way they sometimes appear in municipal plantings - bunched together as ground cover, losing their definition in what the Bedsock describes as "a mess of straggly leaves hiding the mass of snails underneath."

You may find this hard to believe but not everyone loves heucheras!  Amongst others, adorable grump Plantmadnige has made much of his heuchera hatred - but the Sock believes there has been a slight thaw in relations recently.  For this reason, one of the types Plantmadnige is most enamoured of, has been named after him! 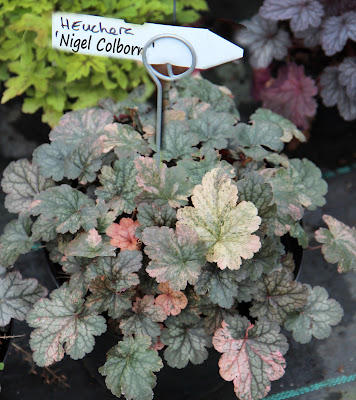 Plantmadnige has publically admitted to an increasing obsession with solenostemon (coleus to you and me!!) which shows that beauty is always in the eye of the beholder.  And here, just for Nigel,  is a picture of the solenostemon collection currently in Wisley Glasshouse. 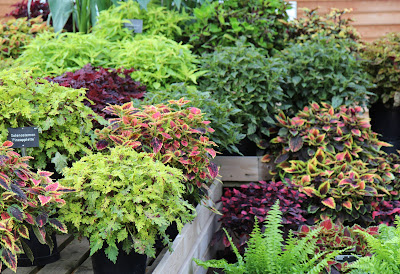 With names like Solenostemon 'Pineapplette' they are never going to appeal to the girlie market in the same way as heucheras 'Chocolate ruffles', 'Lemon chiffon', 'Lipstick' 'Fire chief' and 'Sexysocks'!
Posted by Arabella Sock at Wednesday, September 28, 2011 3 comments 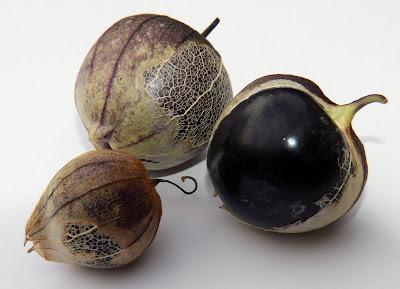 This year, following the ethos of the gorgeous (in a quirky sort of way but not quite as ravishing as Cleve West) Mark Diacono, the Socks decided to restrict their small veg planting area to unusual crops unavailable at the supermarket.  And tomatoes of course - but more about them later.


The picture above is of our greenhouse grown purple tomatillos.  These were a real success, their flavour less sharp and fruitier than the bog standard tomatillo. These could actually be eaten raw as fruit as well as cooked into some interesting Mexican style stews.  The only drawback was they developed a leaf problem starting as small green spots, turning into big holes with the leaf eventually dying off.  This was oedema - a disorder due to overwatering and a humid atmosphere.  It didn't affect the fruits but looked rather unsightly which was a shame.  Apparently the purple tomatillos are more prone to it than the usual ones.


The lemon drop chilli (a rarer one from Real Seeds) was another success - grown in pots in the greenhouse a good cropper, hot fruits with a definite lemony taste.

Another Real Seeds rarity was the Purple Venuzuelan chilli, a very attractive plant to grow but for us more ornamental than use.


Tomatowise we grew several varieties in grow bags in the greenhouse,

Sungold -  (best ever cherry tomato) couldn't do without it

Black Krim - somehow ended up with only one of these and one too many Red Zebras (potting mix up). This plant was never healthy having both fasciation on one truss which died, and then some infection in the stem.  However the few large fruits we saved were extremely tasty and we will try this again.


Red Zebra - Sod's law that we ended up with one extra of these which were the least exciting. They were good croppers (still going) but not quite as well flavoured as the rest with a slightly floury texture.  Good for cooking or drying.


Green Zebra - by contrast these were gorgeous, fruitier than the reds with none of the flouriness.  A slightly lemony zing to them.  Late croppers and still going.


Outdoors and pot grown I used up some Black Cherry heritage variety seeds that had been kicking around .  These were quite delicious although as the weather got worse have been moved to the greenhouse - still bearing fruit.


The Achocha 'Fat baby' (also Real Seeds) were a disappointment.  Grown outdoors in a bag they quickly spread out and climbed rapidly up the fence.  Sadly although they had a good crop the taste was negligible and they looked a mess.  Might have been more fun if I got the exploding variety.


Amongst the usual herbs and the Bedsock's mint collection we also grew 'quillquina' an unusual and rather attractive purple-stemmed see-thru plant with bluey green leaves, a little like coriander but more lemony.  Very good in salsas and unlike coriander, not prone to bolting.


We are still awaiting the outcome of the oca later in the season. We dedicated an entire (small) raised bed to this and although the foliage did look quite pretty it is now something of a mess.  We need to have a balance in our small garden as to what looks attractive and fits in with the general planting schemes and what we really want to grow to eat.  Veg and herbs really need to be 'doers' to earn a place.  Sadly, whilst we love courgettes, our bag grown ones were poor croppers and as usual got various leaf diseases which made them look unsightly particularly as they take up a lot of room.


We are experimenting with growing various veg in re-usable 'bags'.  The Bedsock is less than happy with his newly bag planted purple sprouting broccoli  - it all collapsed overnight.  Don't tell him but yesterday I saw Spook rolling around on top of the bag!!!


As gardeners relatively new to growing a great deal from seed can anyone tell me which of the chillies and tomatoes will come true from seed if I collect them from this years harvest?

That's the Wonder of Wisley

Guess whose phone this is... answer revealed later on. 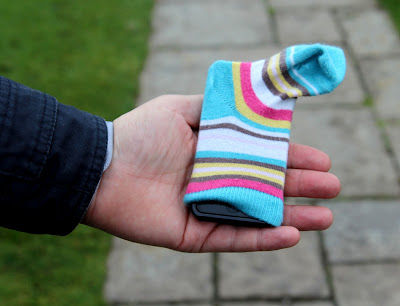 Thursday morning at 7.00 am saw the Sock at RHS Wisley waiting for a Press breakfast meeting at 9.00am. The Bedsock had issued dire warnings that setting off to do the 50 minute journey from Brighton any time later than 6.00am would mean being stuck in traffic for hours and that all the breakfast buns would have been scoffed by the time the Sock arrived! Frankly, the Sock thinks this was just a bit of unnecessary scaremongering from the Bedsock in order that she could be forced to share the ungodly hour known as the 'crackov' that he greets for his almost daily commute. Rather than arrive late the Sock arrived 2 hours early, whiling away the time by driving around lost in the various empty car parks - a trick that fellow blogger  VP repeated shortly afterwards when she arrived from Chippenham.

The Sock is always very pleased and excited to be invited to these Press things and as if the lure of coffee and pastries wasn't enough the RHS had laid on Landscape Man too!


The RHS Wisley Flower show comes just at the right time to reignite all that plant passion that has faded and drooped during the August slump. About forty or so specialist nurseries and garden trade stands exhibited their wares in mini marquees edging the pathways that curve around the lawns leading to the Glass House.


The Sock wanted to stop at all of them and Shop, Shop, Shop! but this pleasure had to be deferred as we were on a short tour of Wisley delights guided by the infectiously enthusiastic Colin Crosbie.


No one needs to 'sell' Wisley to the Sock, she already adores it and despite regular visits over more than 15 years doesn't believe that she has seen everything it has to offer yet! Sue Biggs, the newish Director General of the RHS, told us that membership has grown substantially in the past year (pretty good going in an economic downturn) and this doesn't surprise the Sock as out of all her various society memberships (National Trust, Wildlife trust etc.) the RHS is the one she gets most out of. Also, Old Ma Sock was so impressed when told that the Sock was a "Member of the RHS" that she proudly announced it to all her friends as if the Sock had been invited to be a member of some elite club!  [That having been said, once when Old Ma Sock was extolling the virtues of some neighbours child I made the mistake of asking what she told these people about me. "I tell them you're rich and living in Brighton" Old Ma Sock replied. "But I'm not rich" I protested "couldn't you think of something nice but true to say about me?". She pondered for all of twenty seconds and then answered "No" .]

It was interesting to see the Piet Oudolf borders again, the colours and form in this picture remind the Sock of an Impressionist painting 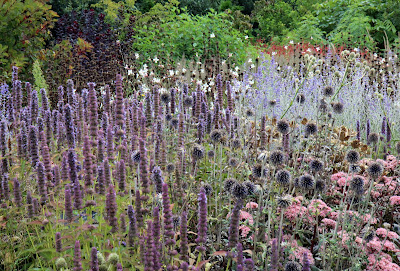 We were invited to taste some of the interesting apple varieties grown at Wisley.
Mmmmm.... tasty!!! 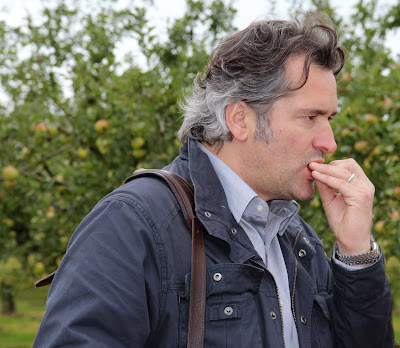 Oh and of course the phone cover - it was indeed Matthew Wilson's and whilst the Sock wanted to believe the cover was a tribute to her, the truth was the sock belonged to his little boy.. sweet. 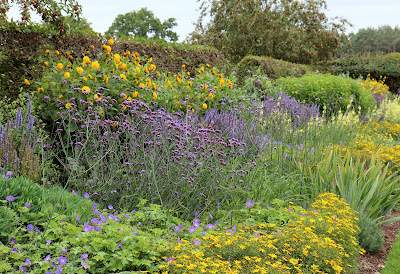 the Sock returned to wander around the Flower show itself. Interspersed around the plant stalls were stands selling delicious cakes, tea and coffees and even barbequed sausages. If it wasn't for the fact that the Sock had already eaten Wisley Banana cake in the crowded cafe whilst having a chatty lunch with VP, she would have felt compelled to partake of these delights.

this display with a lovely autumnal feel to it 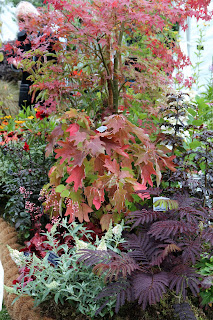 How bright is this dahlia?!!(Rose Cottage Plants) 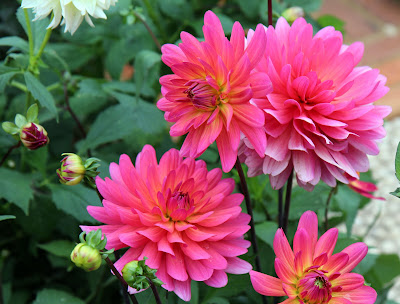 Not as bright as this one!! 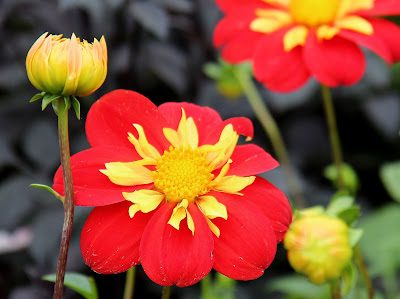 This lovely delphinium is (I believe) Crystal Fountain - one that the Sock ordered from major supplier online earlier in the year only to be supplied with duff plants.  [Note to self - order from smaller specialist nurseries in future...] 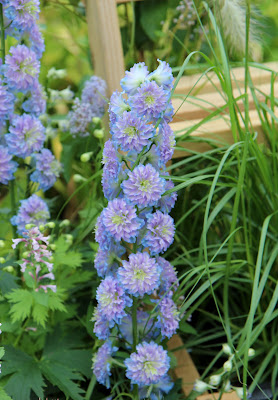 These rather attractive and unusual 'pocket vases' from Ikebana Pots 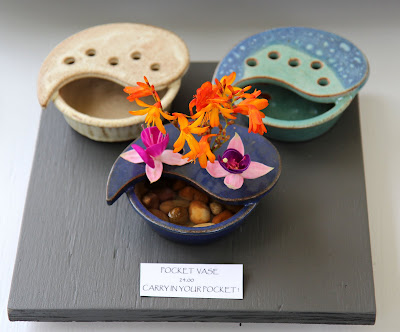 Of course no show is complete for the Sock without seeing the happy smiling faces of Heucheraholics (although in this case it nearly wasn't complete as they only got a stall at the last minute but went on to win Best in Show!!!!).  If you missed seeing Heucheraholics they are having an open day this Sunday 18th September details here.


This was the first time the Sock had attended this particular Wisley Flower Show but it will be a must do in years to come.  Check out the RHS website for more Wonders at Wisley, the Taste of Autumn
Festival and the Tree themed week at October half term where kids (but unfortunately not grown up kids :( ) can join in tree climbing activities.
Posted by Arabella Sock at Wednesday, September 14, 2011 4 comments

..
If you haven't seen episodes one to four here they are  otherwise speakers on everybody....


"September: it was the most beautiful of words, he’d always felt, evoking orange-flowers, swallows, and regret." 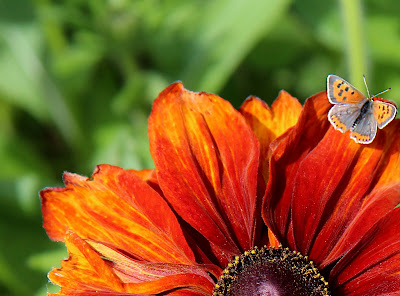