Lifting the lid on Japanese toilets 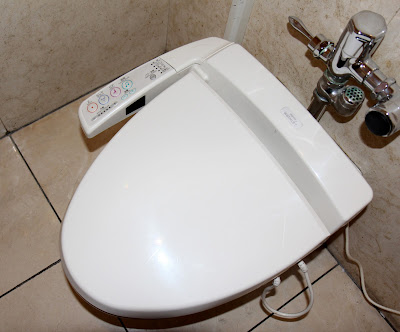 Have I ever mentioned before how one simple thing would hugely improve my life? A toilet that actually flushes properly and doesn't leave you staring down the bowl for the next ten minutes ensuring nothing has popped back round the U-bend and waiting for the cistern to refill enough to reflush. A toilet that doesn't require several buckets full of water lobbed down it every few months to clear the expensive blockage of built up debris the feeble flush hasn't shifted. In short a proper toilet like we used to have in the old days before Eco-toilets were forced on us.

Obviously at first we showed the natural British reticence when confronted with anything remotely resembling a bidet.  But soon the warmth of the seat (which normally one would treat with the slight repugnance of knowing it had only just been vacated) became quite relaxing.  By the time we had reached our second hotel I had tested out a few of the sprays - just for research purposes obviously. At the third hotel the sound of laughter coming from the toilet room assured me that the Bedsock was joining in the research process too.  It took a while to realise the optimum position to sit in order to achieve a full 'wall of water' spray in the correct location - Japanese bottoms are doubtless (like most things Japanese) more compact than British ones.


The toilet seats come with their own control panels and, more worryingly, sometimes a notice saying beware electrocution! As the instructions were almost invariably in Japanese it took a while to work out what all the various controls did resulting in a rather hot bottom when I turned the heating controls up too far.


The more luxurious the accommodation we stayed in, the better the bog seat.  We were vastly taken with the one at our final ryokan which opened its lid when you entered the room and played soothing music.  Less so with a previous one which without being asked, played crashing wave music every time I performed my ablutions but studiously avoided doing so for the Bedsock!

Clearly these are not toilets that you would want to share with others without some provenance of  them being thoroughly cleaned prior to use so we were amazed to find that even the most humble of motorway stations had public toilets with these capabilities. As someone who either spends ten minutes lining any public bog seat with paper prior to ablutions and has perfected the art of hovering high above, the idea of using these was a step too far.  Perhaps it is different for the Japanese - their obsession for pefectly packaging and presenting everything may give some truth to a phrase that passed for wit in my teenage years "X is so perfect their shit comes out pre-wrapped in plastic".

But unfortunately whilst suffering from toilet envy we must take into account the ecological unsoundness of Japanese toilets. Apparently Japan has closed most of its nuclear reactors and my understanding is that it has been able to do this because people are using less electricity in their homes. Unplug a few heated bog seats and another nuclear reactor could be shut down.

Sadly, knowing I am doing my bit to save the world doesn't make me feel any better about my own toilet's failure to flush and I am already missing the 'bidet' setting on the hot seat.
Posted by Arabella Sock at Thursday, December 01, 2011

I read the first reference in this piece as 'heated blog seat.'

My friends lived in Japan for a year & told me about the public address system announcement that blared over the village daily, reminding folk to pay their taxes, park correctly, whatever. I found it difficult to believe, but there you go (as we say in the toilet).

How wonderous and disconcerting. I coudl see that I would become fixated with these as well.

I loved the loos in Japan and have a good collection of photos to share with you: did you ever try pushing all the buttons at once as I suggested? So happy to read this post: it was like re-meeting old friends xx

"never did really get the difference between first two options"

Well, the first one is for those who cannot help but smear ###t all over their derriere whilst wiping, wheras the second gives a burst straight up too, for added cleanliness.

Do they wash your hands for you too?
We need more illuminating research like this carried our more regularly.
How very unbritish.

Ahh washlets are ace. Finding one in a mountain chalet when your bum is icey and cold almost makes the flight there worth it!

Since Christmas is coming up, you might be interested to know that you can in fact buy washlets in the UK, through Toto, the company that makes 90% of the washlets in Japan: http://gb.toto.com/ (Click Products then Washlets)

Did you (and Jo) notice the loo roll holders at all? My dad was so enamoured with them he asked me to bring one home with me when I moved back: http://www.youtube.com/watch?feature=player_profilepage&v=IQwGOwiGNj4

Stopwatch Gardener - one of the strangest things about Japan is that at first glance it all seems very familiar but even after a mere 3 weeks on the tourist circuit you begin to realise just how very different and strange the country is.
Loads of things to be truly envied, virtually no personal crime, no litter, astonishingly polite and helpful people, trains that run on time and are an absolute pleasure to be on! But then as you say about the public address system, scratch the surface and their reality seems to be more and more out of kilter.

Patientgardener - don't worry I thought I'd just ease myself back in to blogging with the obvious blog. I have loads of others about food and gardens in mind but want to wait until my brain is fully operative (as much as it ever is) again.

Jo - OH NO! I will have to go back. I never pressed all the buttons at once.

Roland I'm sure you could incorporate these into your pool business - once used people will never really want to go back to their dour British loos.

Hi Fiona and welcome to my bloggywog comments. I'm ashamed to say we don't even have a loo roll holder here and just stack the rolls on top of the cistern :( But if we ever go down the loo
roll holder route that one in the vid will be the one for us! Marvellous invention.

Surely all that water spraying plays havoc on your delicate cashmere self????

While interesting to read, I could not possibly comment on a lady's toilet experience. I look forward to comments on other aspects of your visit.

More importantly, you seem to have enjoyed your experience in Japan and I'm glad to hear that.

Loved all that. Very educational. Loos, like supermarkets are an important part of foreign culture and bear investigation. Years ago we once all took turns in a loo in a cafe in Delft because the seat whirled round to clean itself when you flushed it. The locals, who were used to it, all watched us in amazement as we trooped in and out.

Fiona, I checked out the loo roll exchanger on Youtube and then was unable to resist 'Japanese Toilet Disaster'. Really made me laugh,
though what that says about me I'm no sure!

Glad you are back Arabella, and that you had such a good time.