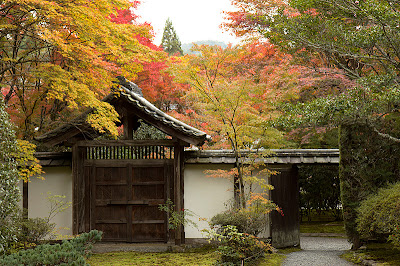 Hello and Merry Christmas to old and new visitors to my bloggywog!  I'm not bored with blogging about my Japanese hols yet and in any event there is nothing of any amusement to be had on the Gardening TV front at this time of year.  Normal service may be resumed in the New Year.

But for now, boys and girls, I am going to tell you about some Kyoto gardens we visited.  Don't worry there are not too many words and lots of pictures.

When I planned our holiday with the marvellous Inside Japan Tours I explained that I was very keen to see some of Japan's great gardens.  They came back to me with the idea of visiting  the famous Saiho-Ji Temple Moss Garden in Kyoto but there was a catch... because in the past zillions of people tramping around had destroyed the moss visitors now had to prove their worthiness by booking in advance, paying a huge entrance fee (over £30 per person) and spending two hours in the temple doing zen buddhist chanting and copying scripts/sutras before being allowed in the garden!  Obviously we just had to go - apart from anything else the idea of a couple of hours chanting and calligraphy sounded quite charming and an antidote to the rushing around we were likely to be doing on the rest of our tour.  So armed with pre-paid permits and brushes provided for us by Inside Japan Tours we arrived at  Saiho-Ji, removed our shoes at the entrance porch (as ever) slipping into the provided sandals and made our way into the temple. This is where we made a wrong call - asked whether we wanted to sit inside the temple where all the Japanese were kneeling at low desks, or outside on the verandah with proper chairs, we opted for the latter to save ourselves from likely leg cramps.


Disappointingly those of us outside, which seemed to consist of the old, the infirm and a couple of foreigners, didn't get to use our brushes and ink to copy the sutras but were instead provided with felt pens and lines of scripts for us to copy or trace. 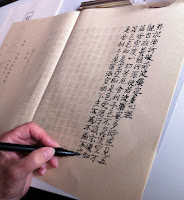 This didn't seem like it was going to be so much fun for two hours but things improved when the buddhist monks started their chanting which sounded exactly like Plastic Betrand's 'Ca Plane Pour moi'.  I sang along the words to this for a while until it got faster and faster and the few lyrics I knew ran out.  After that I started chanting counting down backwards from a hundred - a test I occasionally do to check I don't have Alzheimer's and that the Bedsock's pronouncement that I forget things because I don't concentrate is correct.  That having been said I've had OldMaSock count down from a hundred several times, she always manages to do it and as we all know OldMaSock is more than a tad demented.

After about forty minutes of copying and chanting a monk approached and told a family with howling baby they could go.  This was fine but then an elderly couple near us suddenly scarpered as well and you could feel everyone on the verandah was thinking "Well if they're off perhaps we should go too before the garden gets crowded!"  So it was on this account that the Socks threw down their pens, handed in their sutra (which the monks keep and pray over) and quickly retrieved their shoes, making a hasty exit before the whole mob singing Ca Plan Pour Moi inside the temple emerged.

And so into the moss garden.  What can you say? It was beautiful, enchanting and more than a bit mossy. 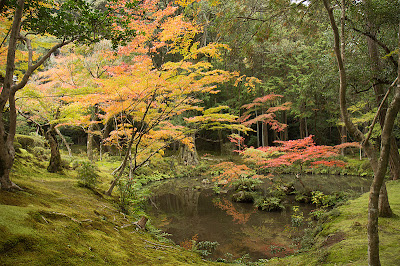 I hadn't been sure what to expect, perhaps more sculpted forms of moss and stones as used in Ishihara Kazuyuki's Japanese Moss Garden at the Chelsea Flower Show in 2010.


What we found was that the entire ground of the garden was covered in pillowing moss of more than 120 different kinds. 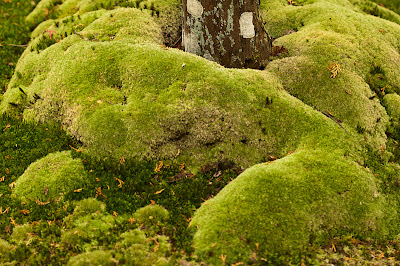 It certainly produced an exquisite effect although apparently the moss is at its best in the spring. 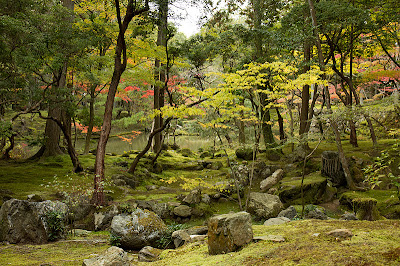 The fabulous acers were at their most magnificent though, lighting up the scene with their vibrant colours.


This was our main reason for travelling in November in the hope of seeing the famous autumn colours. We were still a little early as Japan, like Europe, has experienced a warmer autumn than usual, lacking a hard frost in Kyoto which gives the most spectacular turning leaf colours.

An artfully placed boat to complete this scene.. 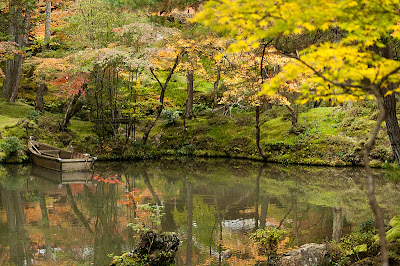 I loved the splash of such intense leaf colour above the velvet green of the moss. I have looked at pictures of the garden in other seasons and without the vibrant reds and yellows of the Japanese maples the garden seems to descend too far into a sea of immeasurable green. 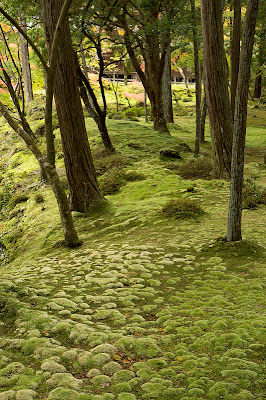 This lovely tree graced the temple courtyard, it looked like it was sprinkled with silver magic - a Japanese Singing Ringing tree. Does anyone know what it is? We felt privileged to have been allowed to visit this garden and it was worth the time and money spent particularly as the rules for entrance cut down the crowds and made it very quiet and peaceful.
Posted by Arabella Sock at Thursday, December 22, 2011

How fabulous - I am so jealous. Thank you for sharing though, so generous

I'm curious to know how a garden like this starts. Was one of the monks a budding garden designer & started from scratch or is the temple sited in an area rich in native mosses & the monks just took advantage of nature?
Whichever, it does look absolutely superb.

Tee hee PatientGardener - I am glad if people are jealous it makes the fortune we spent on this trip all worthwhile!!

you have very enquiring mind Simon and a good question. So like you I googled the answer and in fact although the temple was built before the 1300s (and burnt down several times as they seem to do in Japan probably due to earthquakes, candles and wood not mixing too well) the moss only appeared and took over of its own accord in the late 1800s onwards when the temple fell into disrepair for a time.

A moss garden like this is my dream...walking through it bare-foot. How wonderful to be able to visit - definitely on my list...and I love the fact that you have to 'work' in order to get gawping rights.

Wow, what a special place to have visited. I love the colours of the acers above the moss.

You have indeed been taught at the knee of the master of Googling.

As Confucius may well have said.

"I am not one who was born in the possession of knowledge; I am one who is fond of Google, and earnest in seeking it there."

Simply stunning. Love the maples and that moss. Hope there's more to come on, so normal service need not be returned asap...! Merry Christmas!

What were the leaves like on the silver tree? I wondered if it might be a pyrus salicifolia in its original form. We can only get the weeping ones over here, but it comes from asia.

A wonderful report and photographs on an exquisite experience. Many thanks, Ms. Sock, and a very Happy Christmas to you.

My thanks for your very entertaining blogs during the year; looking forward to next year's writings.

It looks wonderful, and tranquil. Although I'm not sure how tranquil a garden can be if you have 'Ca plane pour moi' running through your head.
Merry Christmas and best wishes for the new year,
Sharon

Merry Christmas to you all.

Jro we didn't get close enough to the tree to have a good look at it. There seem to be very few leaves. I'm not sure whether it is a pyrus - tried googling but didn't seem to fit any of the images.

Love the thought of you sitting there chanting ca plane pour moi - great song, love it. Silly question: but are there any birds on the gardens you visited? Are there any birds at all in the cities, or are they too not-bird-compatible?

Hi Helle, not a silly question at all, we are keen bird watchers and took our binoculars with us in the hope of seeing wildlife but were rather disappointed on that front. Partly because we were in towns a fair amount but even in the parks there weren't a huge amount and in the moss garden I don't think we saw any at all as we would have got the binoculars out to watch them. We did see more in the more remote areas and a monkey and some deer but otherwise wildlife was sadly lacking.

I also visited Sahoji this autumn, part of a long awaited trip to Japan.
I have a picture of the same tree, I checked it out closely, I believe it is a autumn flowering cherry.

Thanks for that. I googled autumn flowering cherries and found some similar images although none quite as shapely and silvery as that one. It's strange that in the three weeks we were in Japan we only saw two other British tourists and only a few 'westerners' and yet I now know of several people visiting the same places as us at about the same time. A lovely country to visit and we barely scratched the surface.