Can you imagine a diet composed mainly of fish and rice with no chocolate, no dairy, no red wine and no bread? Neither could I but three weeks in Japan showed me that not only was it possible but I felt a load healthier, more energetic and thoroughly enjoyed it.   We were lucky that quite a few of our meals were sumptuous traditional feasts at the ryokans we stayed at which I will blog about  later but the quality and range of street and market food was quite fantastic too and with the opportunity of free tastings almost everywhere - OldmaSock would have been in her element!  The only problem in cafés and restaurant was choosing from extensive menus in Japanese BUT there is a way around this - the ubiquitous plastic food replicas! 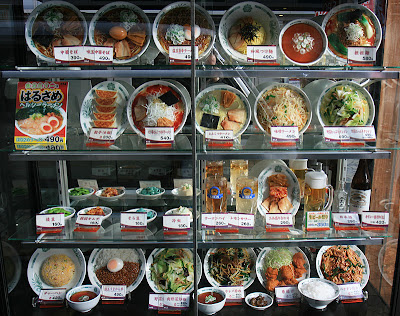 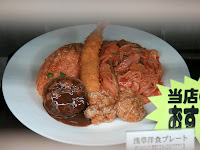 Most cafés and cheaper food establishments will have a display case outside where you can point out the meal you want!

Unfortunately some of them don't look so appetizing close up! 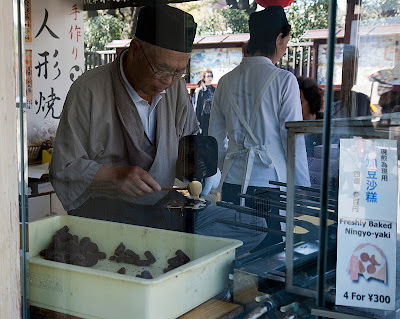 and various forms of rice crackers - many of which sounded nicer than they tasted. 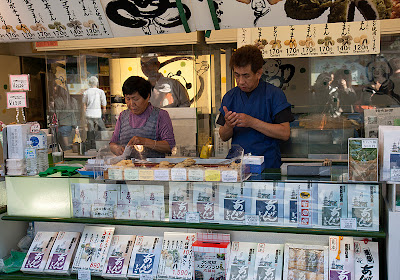 Our favourite outdoor market was in the lovely town of Takeyama in the Japanese Alps. 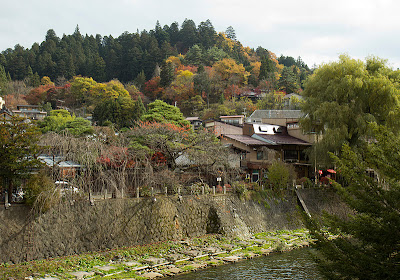 Market stalls ran along the side of the river selling local fresh vegetables, home-made pickles and spices.  The lady below is mixing spices according to customers requirements these include hemp seeds, dried mandarin orange peel, black sesame seeds and Japanese sancho pepper.. 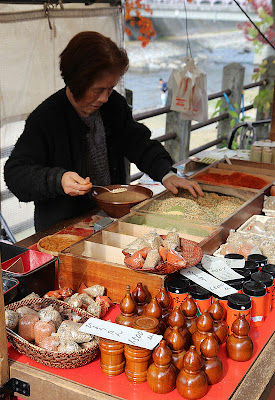 You can never have too much fish-on-a-stick 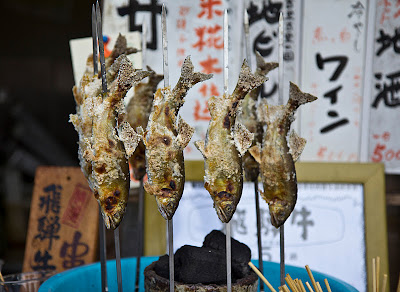 You could sample all these jars of goodies - so we did and came away with some fabulous wasabi coated nuts, some cranberry coloured things of unknown origin which were yummy and some mixed nuts with what turned out to be dried fishy bits in with them which were yuck and tasted like some cat treats I once accidentally ate! 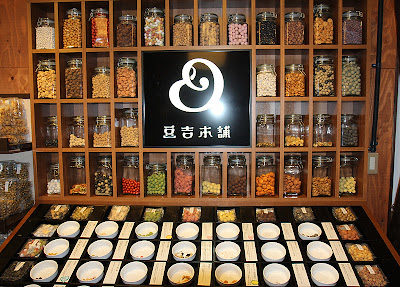 Didn't really understand what this was supposed to be - possibly marshmallow 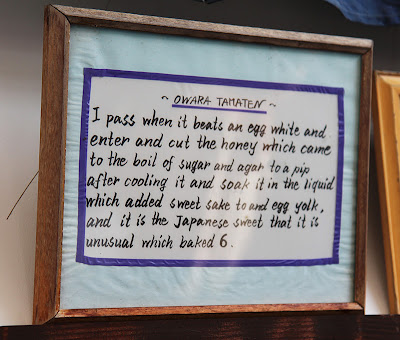 but as usual we tried one anyway and whatever it was it was rather good... 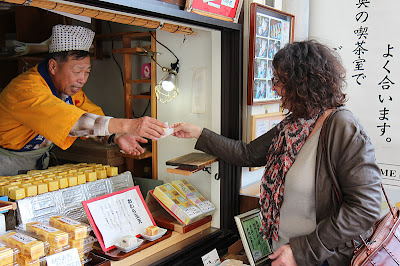 the only grumpy Japanese person we met in three weeks was Mrs. Dumplings - after we'd been stood around salivating for a while she informed us they wouldn't be ready for half and hour!  We eventually tried some of these in Kyoto and whilst I thought they were no great shakes the Bedsock felt they could become quite addictive.. 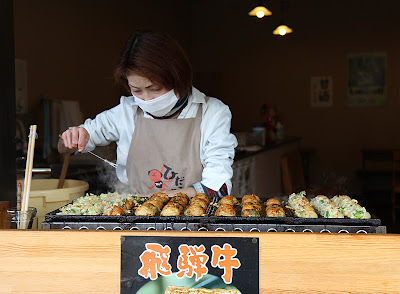 this guy was cutting his roll so fast that a crowd gathered in the expectation he would slice off a finger.. 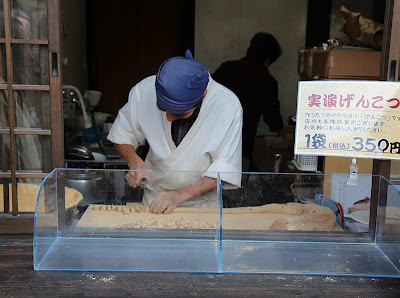 Takeyama has streets of old merchant's houses some of which now house sake breweries.  We didn't have time for the brewery tours but I sampled a fridge full of sakes all of which were quite different to each other and for the most part very good - except for the one that was mixed with yoghurt (a Japanese version of Bailey's?) which tasted like rancid milk vomit. 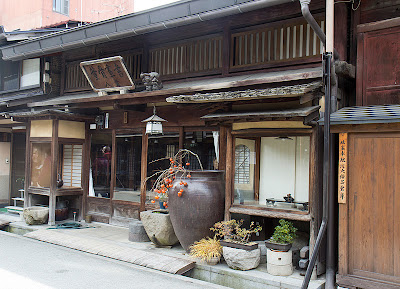 Wherever there was a queue of people we knew fab food would be at the end of it and one of the best was a piece of sushi with kobe beef on top that was to die for! No photo as we wolfed it down too quickly.

We move on to Kyoto where Nishiki food market 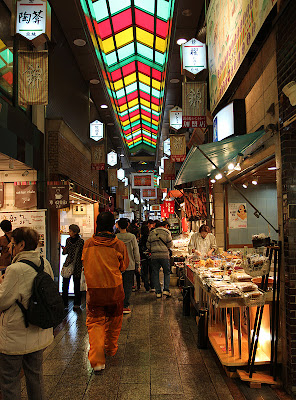 was enough to make the Bedsock cry with frustration that the packed pickles wouldn't make the journey home.. 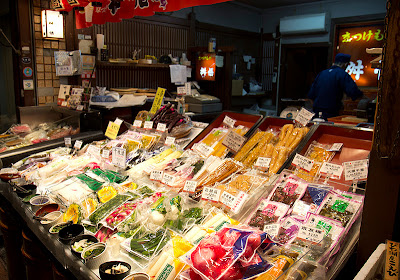 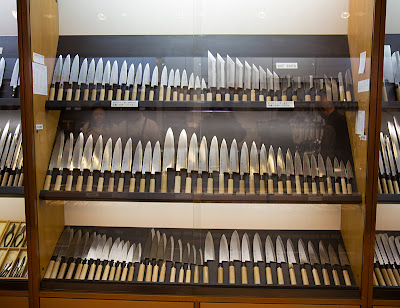 and they inscribed his name on it (at least they said it was his name)!!! 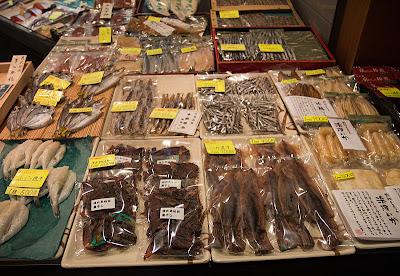 You can't have too much octopus 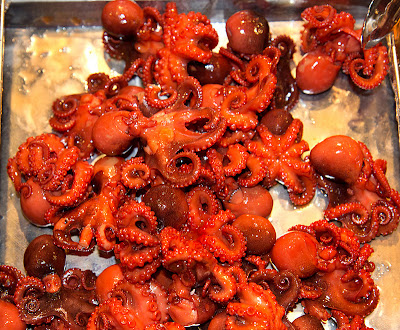 particularly when it is on a stick! 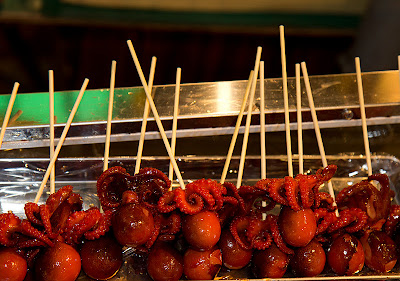 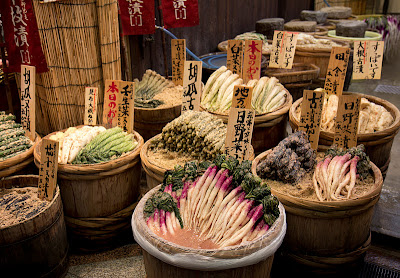 We came home having cast off our chocolate and cheese addictions and desiring only sake and plum wine.  This hasn't lasted, although we do now have a craving for pickles and raw fish that is never going to be satisfied.
Posted by Arabella Sock at Wednesday, December 14, 2011

I have a very good friend in Tokyo and have been v remiss in not visiting in the 14 years or so he's lived there. Your pics/story makes me want to put that to rights. Sounds like an amazing trip. Thought Id let you know my holiday present hasnt arrived yet though...must be the Christmas post

Lovely pics.
I looked back at our photos from previous holidays & shouldn't have been surprised but over half were of markets of one sort or another. The worst was a weekend in Barcelona; 10 pics of Gaudi architecture (inc 2 pics of Sagrada Familia) & 55 pics of the food market off the Ramblas.

These pictures make me so homesick for Japan. I lived there about 15 years ago. Life doesn't seem to have changed too much

I know that 'rancid milk vomit!' Was given fermented ?mare's? milk in Iran decades ago and could barely keep it down.

I'm so relieved that the 'honey came to the boil of sugar and agar to a pip.' Imagine how unfortunate it would be, if all that beating and cutting had been to no avail.

Your pictures, as usual, staggeringly brilliant and makes me want to go even more. But no dairy or chocolate? That would be a huge sacrifice, especially if replaced with a diet of dodgy fish, seaweed and long, thin radishes.

Octopus on a stick. For some reason I love this idea - it is an intriguing blend of calamari and James Bond.

Also, I adore that enormous pot in your photo. Sadly, it didn't get a mention as it appeared to be captioned by the "rancid milk vomit" quote.

What an incredible place! Very keen to go now. The plastic food replicas made me giggle, but I suppose very hand if you don't speak/read the language. Had my coffee this morning, WITHOUT milk though... thanks for that!

No chocolate for three weeks would be a huge test, but even worse, all the fish. I don't like fish. Guess the dumplings and noodle soup would make up for it - and the sushi. Yes, I like sushi. ;-)))is fish, I know, but different fish!!

Wonderful account of your visit. The fish sounds absolutely adorable and I could live on it forever.

SS - we were so in love with French/European markets when we first found them that our photo albums are heavy with pics of stalls and produce. Although in those days even a visit to Carrefour was a real treat as so much stuff unavailable in the UK. In the end I had to say that I wasn't going to spend yet another holiday spending so much time browsing around markets. I think our worst crime was to visit Florence on a day trip and spend the entire time in the market - but it made us happy at the time.

thebotanicalbaker - I can imagine that Japan would become addictive there is so much I miss about it already even though I can't imagine living there.

Dawn - the pot is lovely isn't it, I think that is a branch of persimmon sticking out of it. Takeyama was one of the few places where we found these attractive older style houses - most places are modern builds probably due to earthquakes destroying so much over the years.

Looks like you had a fantastic time! Some of my best holidays have been in Japan, your photos really took me back! I've been to Takayama too, though just overnight - I'd love to go back, it's such a beautiful place! And very different from Tokyo/Kyoto etc!

I did suffer from lack of chocolate too - though became quite fond of pocky, those chocolate covered sticks!