The Socks have long been wasabi addicts so when we spotted "Wasabi Farm visit" in our guide book with the possibility of sampling wasabi beer, wasabi ice cream and noodles in hot wasabi sauce, we knew it was the place for us.

Daio Wasabi farm is just outside Matsumoto a rather attractive town in the Japanese Alps with a very interesting castle and an extremely good yakitori bar where everyone shouts "Hooray" when a new customer comes in.  Actually, it sounded like "hooray" but it could have been anything - either way after a few sakes the Socks joined in the custom with gusto.

From the guidebook description the Sock's had imagined the Wasabi Farm to be a small, family concern with a homely restaurant serving a Japanese version of Mamma's home cooking.  The reality, as so often happened in Japan, was somewhat different - an enormous car park and the Japanese equivalent of Wasabis-R-Us greeted us.  Lord Sugar would have been proud of this farm, every possibility of 'adding value'  to the product had been exploited with shops and cafes offering everything from wasabi coated nuts (yum!) to wasabi flavoured cake (not so yum!).


Away from the usual maddening crowd milling around the facilities the wasabi fields themselves were quiet and beautiful with their pure flowing water and distant backdrop of the snow-tipped Alps.


We saw this and thought of triple GMG Award Winner Mark Diacono (pictured on the link with his Movember moustache) and wondered whether at last we might have found something he wasn't growing on his climate change farm.  No such chance - Mark admits to attempting to grow a wasabi or two but with no great success.  He's missing a trick - here's how it's done.


The science bit... Wasabi is an indigenous herb of Japan and mainly cultivated in cool plateau regions where the spring water is under neutral conditions. The temperature of the water of Daio Wasabi Farm is kept 13℃ all year. Wasabi root is often grated and eaten as spice. It provides excellent mild flavor to Japanese cuisine. It's flowers, leaves, and stems are eaten in various styles such as tempura, boiled with soy sauce and sugar, cooked with rice, etc.  Simples! 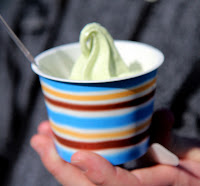 The Socks impulse bought a load of wasabi themed products including a wasabi burger and the really rather good wasabi ice-cream (rather bad photo of it) plus souvenirs of wasabi croutons, wasabi and seaweed seasoning, wasabi miso and various other stuff that seemed like a good idea at the time but now we actually have no idea what it is.

Exploiting your product is clearly the way forward and we thought of our friends Sean and Jooles at Heucheraholics.  Inspired by the fabulous foodie names given to heucheras we envisaged a  "Send a gift" service incorporating a heuchera with a couple of cupcakes in matching flavours, Plum Pudding, Creme Caramel, Sticky Toffee Pudding etc.  Even heuchera 'Fire Chief' could be presented by a Fireman-O-Gram - the scope for added value is endless.

Sadly the one product we really wanted to buy wasabi-wise was some top quality paste or powder.  This didn't seem to exist in Japan - perhaps they are purists and only use the real raw grated root.

So until Mark Diacono figures out how to make Otter Farm the Wasabi Centre of Devon we will have to make do with the second rate wasabi powder products we can buy here.
Posted by Arabella Sock at Friday, December 09, 2011

How fascinating - not having ever really eaten Japanese food I havent tried wasabi but I found it really interesting to see how it grows and I love the Japanese commercialisation of everything. Did you drive around Japan or use public transport?

What a lovely place to visit!

That's so fantastic to see. No idea, Wasabi plantations looked like that. Terribly beautiful. I quite like Wasabi, was brutally introduced to it by an annoying Swiss person, in the usual fashion; 'Try this (full teaspoon full), really nice.' Blew my head off. Have recovered and enjoyed it since. Though, not sure about the ice cream. Would love to know if we could grow it here. Get on with it Mr Diacono....

Blimey...Id love to turn the whole bit near the river into wasabi-central....sounds like you had an amazing trip you lucky buggers

Stick a plant in a pot, protect it from slugs, the weirdos love it, and you'll have more wasabi than you can eat, unless you sprinkle it over everything from your muesli to digestive biscuits.

It really does look like you've had a great trip, Japan has been on our places-to-go-to list for quite some time.

We did a bit of both Patientgardener, which was a revelation. The bullet trains (shinkansen) were an amazing experience in themselves and compared with the UK the roads were almost empty.

Petra - someone did that to me with my first taste of lime pickle!

Hi Helle, if we can find a wasabi plant we will give growing one a go. Japan was a revelation to me - until I started looking at the travel sites I had very little idea what to expect outside of Tokyo. A lot of the stuff we saw from trains was pretty ugly, huge industrial towns covering the entire coastal plains but much of the interior countryside we saw was very beautiful.