That RHS Judging Row in Full 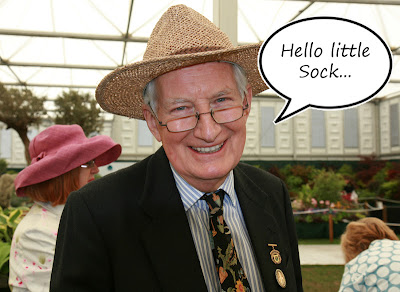 The more cognisant amongst you cannot fail to be aware of the enormous storm in a teacup row that has happened every year emerged unexpectedly over the judging of Chelsea show gardens and indeed show gardens in general.  But let us stick with Chelsea because, as we all know, that is the only one that really counts.

Amidst calls for transparency, celebrity judges, detailed analysis of every decision, equality for women gardeners and Simon Cowell, there is but one voice of reason - and that is the voice of the Sock.

So here we have the Sock's ten criteria for judging at the RHS Chelsea Flower Show.

1. All the Sock's friends should get gold medals and people who she knows and quite likes from twitter should get silver gilt - even if their gardens/exhibits are a bit rubbish.

2. Cleve West should get gold whether he is 'showing' or not.

3. Cleve West should always get Best in Show

4.  That David Do'anythingforthe'money should only be allowed into downmarket events like GW Live

5. Anyone who gives out free champagne at Press Day should get gold.

6.  All judges should be forced to wear smart blazers emblazoned with RHS logo and straw hats (see picture of elderly gent at top). This is important for preserving the mystique of judges - we don't want them looking just like some bloke from down the road. For the sake of equality at least one of them should be female - preferably Germaine Greer or similar.

7. There should always be at least one 'comedy' exhibit - like the Plasticene Garden or The Oirish Sky Garden which will also double-up as the one receiving the 'People's Award' because let's face it, the people don't know any better.

8. Ringo Starr should get Silver

9. er.. that's it. I was going to do more but we don't want to get bogged down with rules and regulations  - at the end of the day it's not rocket salad.

10.  In the interests of fairness and transparency we are going to have a poll on this so can you  go to the top right of this post and tick the statement you most agree with.
Posted by Arabella Sock at Tuesday, February 21, 2012

I agree with absolutely every point on your list.

But I'd also add that it should be forbidden for any exhibitor not to have at least one water feature plus hostas and rhododendrons in their gardens.

Dan Pearson should be given three acres to design.

Cleve should design the entire north bank of the Thames from Hammersmith to Wapping.

I read celebrity as celibacy & then thought that having celibate judges or more interestingly celibate designers might sort the wheat from the chaff....actually that was Hampton Court I semm to recall.

I have voted in the only way possible. But I think that hats for the judges should be straw boaters with appropriate ribbons and possibly a flower, rather than a second hand stetson ...

...every exhibit should have at least one garden gnome ;)

Nice to see your addition to the debate Ms Sock

- The presence of gnomes or rhododendrons should automatically disqualify entries.
- Hostas may be permitted but only if plain green. (I plead the 5th amendment on this point. I once gave in to H. Patriot..)
- Water features must be still - a barely detectable ripple is just permissible
- allegory is absolutely forbidden. A Iris is an Iris, not a representation of a person's moral collapse
- Salvia 'Carradonna' and bronze fennel mean an automatic bronze

That's my tuppenceworth. Otherwise spot on.

I think the organisers must be some of your blog readers!

I say gnomes and sloshy water features should be de rigeur and called 'the tayste challenge' and be worth 100 points.

Is it too much to hope that JAS will propose these sensible and well thought out changes at the next RHS big wig meeting? (whilst wearing a straw boater, of course)

At last, a comprehensive summary of all the key points. Thank heavens. I say; bring back the 1950s rock gardens on Rock Bank (where the beeb have their compound), voting by bowler hat on brolly, pole dancing in the marquee on Press Day and a seventeen course Monday luncheon. Champion.

I am jolly well hoping I'm A Friend

Excellent summary of the main points. All agreed, though have my doubts about a medal for Ringo Starr. Is he even allowed to attend? Unsupervised?