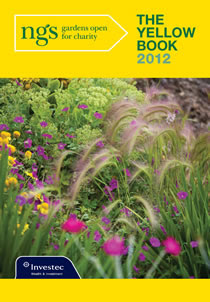 No.. no.. no...! you silly people! I didn't mean she permanently has strange men sending champagne to her table, eyeing her up in the street and paying for her taxis whilst her husband dresses in camo gear and goes round shooting at the furiously jealous wives of all male associates!  I meant did she write this article on NGS Gardens' in the Spectator in order to ensure an explosion of publicity which would set her up for a lifetime of appearances on 'Celebrities Gardening in the Jungle' and 'The Only Way is Veddw'? There can be no other reason.

Anne and I are doomed to be forever opposed at each end of the spectrum,  I like to squeeze as much enjoyment as possible out of any given situation whereas Anne seems intent on sucking the life out of it or worrying at it like a terrier with a bone! Where Anne sees a negative I see a positive as our views on NGS gardens might illustrate.

As the first comment on Anne's piece from KenH seems to sum up eloquently what most will be thinking, I'm not going to write a rebuttal of her article but rather a brief note on why I enjoy visiting NGS Gardens.

Anne says the NGS was started "as a scheme to let everyone, even the hoi polloi, into posh gardens for a donation to charity".  Now, it seems, it lets posh people into the hoi polloi's gardens and is all the better for it.  There is little more interesting than seeing what can be done with a garden that is likely to be far more attainable than the immaculate designer conceptions of the rich and landed. Little more satisfying than mentally tweaking the NGS garden to how YOU might have designed it.
Little more gratifying than the garden being just a bit rubbish so you can feel so much better about the garden you have been mentally dissing for so long - your own.

I have seen an NGS garden that was an explosion of pink begonias - so beautifully cared for and displayed that you could wish that you didn't find it so horrendous!  A garden that was so dull and badly maintained that if it hadn't of been for the lemon drizzle cake we would have thought we were at the wrong place. A friend's NGS garden that bought three-dimensional life to the photos I had been envying on their blog for some time - and the reality proved I was right to envy. Gardens of great interest, intelligence and imagination created on tiny budget in  small spaces each NGS garden stamped with the owner's personality and offering a little insight into their gardening psyche and lives. And unlike most of the posh, landscaped, gardens you can chat with the owner on an equal footing and take a little of their gardening wisdom home with you too.

Of course, some of the NGS gardens are pretty posh and perfect with a shed load of money thrown at them but they aren't open to the public at all times. The scheme gives you chance to snoop around gardens you wouldn't normally get access too - and its all for charity too.

There is one point on which I have to totally concur with Anne "No garden visitor will be confronted by anything demanding, except the range of cakes".  Such a truth!!! At some gardens I have been confronted with an array of cakes to rival Betty's Tea Rooms - and that is going some!

PS.  Keep your eyes out for a new NGS Gardens app coming soon.
Posted by Arabella Sock at Tuesday, April 17, 2012

I agree and I love a good mooch around an NGS garden but I can sort of see where AW is coming from. 12 years designing gardens has taught me that the general public, in my neck of the woods at least, are ultra cautious about anything remotely groundbreaking when it comes to their back gardens. Initially open to ideas and wishing for a garden that wows, they shy away from the innovative when it comes to paying hard cash – fearful of the impact on house values (understandable) and adverse reaction from friends and neighbours. Somewhere along the journey from initial brief to construction they simply bottle it. Generally speaking clients want to look out at a garden that is pleasing to their eyes, that flows, looks designed but doesn't offend and sits comfortably within their gardening terms of reference – typically The English Garden, Gardeners World and NGS gardens. If the NGS continue with their current offerings I don’t anticipate a shift in mindset any time soon.

Haha. My advice is never to trust a writer who resorts to saying things like "There can be no other reason". At the very least it demonstrates their serious lack of imagination or understanding about how others might see the world.

Hi Cycling Gardener, I can often see where AW is coming from and very interesting arguments they are too with much we could agreed on. Unfortunately they are often so OTT and patronising they alienate the audience to the point of preventing further debate.

Charles, you are right - although I don't think I can in general be accused of a lack of imagination. Had I been writing an academic treatise or a rebuttal of some of Anne's more fallacious arguments I would have steered clear of it. As it is the phrase was deliberately placed to add a certain intransigence and humour to the Sock's position and imply that, to an extent, both were as bad as each other. Just thought I'd explain that to you..