A thousand small deaths in Brighton... 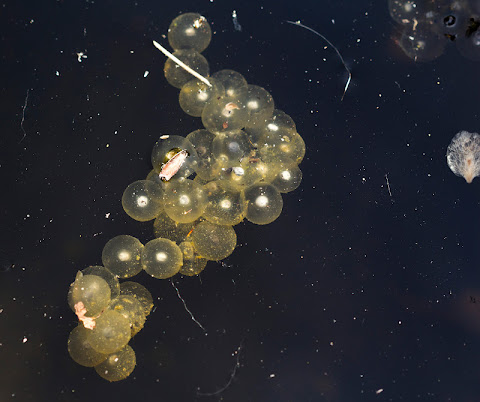 That is a picture of my frogspawn - it doesn't look good to me. For weeks I have been watching and waiting for the little black balls in their surrounding jelly to start to transform, wiggle and break out, hoping the delay was due to the weather and a reluctance to leave their surrounding spheres for the harsh reality of pondlife.  I think I need to face the fact that they have all died.

We were absurdly pleased and flattered that the frog had chosen to use our little pondlet as a birthing pool.  Over the years there has been a decline in the frog numbers visiting our small urban garden. When we first moved here there were loads leaping about the lawn at night, even coming into the kitchen. When we replaced the old fridge we found three decayed frog bodies under it where they had probably hoped to hide from marauding cats.  I did wonder if perhaps frogs didn't have reverse gear and having squeezed under it couldn't back out.  One of our builders found a fossilized frog in our chimney which he took home for his son to add to his macabre collection of small dead bodies.

We had a frog living in a gro-bag by the back door which would pop its head out and shout at us in disgust when we watered the bag.  When the cats sat on the patio gazing out into the garden the frog would sit on the gro-bag behind them gazing at their backs.  Luka was a great 'frogger' holding them gently in his mouth he would bring them back from neighbouring gardens to play with in his own. I lost count of the number of frogs I rescued from him, some more than once.

The pondlet is designed as a 3ft diameter 18 inch deep sunken tub with bricks overhanging the top to create a mini-well.  When we found three frogs in it swimming around in ever decreasing exhausted circles we realised they needed an escape route.  My original idea for the pondlet was to just have the water create a mirror surface so from my upstairs study I could watch the movement of scudding clouds reflected in it. Breaking the surface water with large stones to provide an amphibian exit wasn't quite my design plan but needs must and by now there were newts in the little pool too. 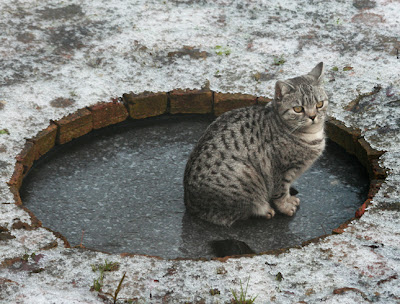 All too often after a hard winter the spring clean of the pondlet has produced at least one decaying frog body so it was with great excitement this March that we found not just a live frog in there but loads and loads of frog spawn.  Our plans to clean the pond pre-hosepipe ban were put on hold and I have been out daily to check on the progress of this new nearly-life.  Unfortunately Hebe has been checking on it too, sat patiently by the pond like a trout tickler, ready to flip out a surfacing frog with her paw.  She watches the frog whilst I watch her, both of us ready to pounce..  I had still to come up with a plan as to how we might defend any emerging froglets from her feline vigilance.  The Bedsock suggested that it would be better to take the spawn to a country pond - but I didn't want to part with it. Now, whilst the frog may have survived the threat of cat torment the spawn appears to be dead. The little black dots have turned white and there is no sign of the squiggling life I had been waiting so eagerly for.

If anyone has ideas on why this might have happened do tell me.  The water was the same as had overwintered except for a top-up from the water butt.  There was early warmth in March and then this cold snap but other than that I can't understand why these small deaths should have occurred.
Posted by Arabella Sock at Tuesday, April 24, 2012

It's a shame but it happens. Frost can kill frogspawn. Here the warm start to the year resulted in early spawning - did that happen with you too? I've created a shallow "spawning area" which the froggies use each year. There's a lot of planting which offers protection against the cold (and predators) so the late frost here didn't do any harm. Your pond is more open and a late frost would probably have seen the spawn off.