The Sock and Trollop Road Trip - a journey in three parts


Seven thirty on Tuesday morning the Bedsock deposited me at Lazy Trollop's Wimbledon manor with strict instructions that she was to be the 'responsible adult' in our Thelma and Louise scenario. I had already bagged the role of Louise who, as the Bedsock had noted, was the one who talks all the time and causes trouble.  The Trollop was already up and busy (in a Lazy kind of way) baking cakes for our forthcoming visit to a very lovely, interesting, couple - only one of whom excels at the art of grumping. But more of that later... for now we are about to set off on our road trip. Soft-top down, headscarves and sunglasses on, Lazy Thelma at the wheel driving diligently in the slow lane of the motorway whilst I fulfil the Louise role by recounting my entire life story - not drawing breath until we pass South Mimms and stop for our first coffee.  We are on our way Oop North to Barnsdale Gardens created by the late and great Geoff Hamilton.

I have a confession to make - I don't think I ever saw Geoff Hamilton presenting Gardener's World - my first memory of that would be Percy Throwup. (Boy did my brother and I ever laugh at that little joke as we routinely escaped to the pub of a Friday night leaving OldmaSock avidly watching what we described as her 'boyfriend' presenting GW).  After that, all my Friday nights no doubt passed in a haze of alcohol until some decades later I would occasionally catch Alan Titchmarsh's stint as my love of gardening started to reignite.  In messageboardland Geoff was seen as a saint and 'bestest ever presenter of GW' who no-one, not even His Montyness the Lord of Cord could live up to. But, dear reader, I have heard rumours in the past that Geoff's halo quite often slipped and he was more than ruthless in his dealings!  Still, apart from me, none of us are perfect and it was with a sense of growing excitement the Sock and Trollop entered the hallowed domain.


You are now entering the main garden that was used by Geoff when presenting
Gardener's World ... from 1983 until 1996

and then into a hedged corridor which is one in the eye for all those who do nothing but moan about Monty's hedges and say that Geoff would never have had hedges like that!


After that there were a series of small gardens each having been made to demonstrate something for the viewer, the Cottage Garden - I think deep inside most of us love a cottage garden because they ARE pretty, wildlife friendly, informal and relaxing 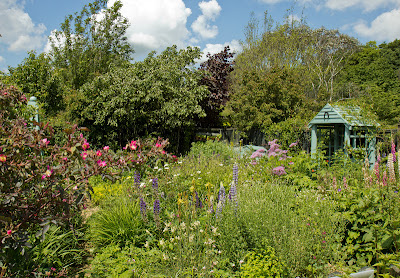 The beginners garden - we thought this dull even for a beginner 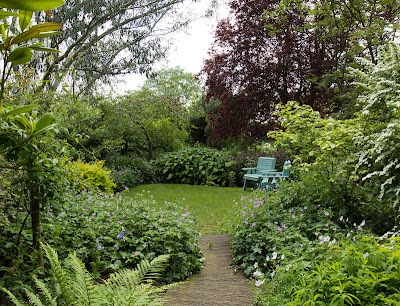 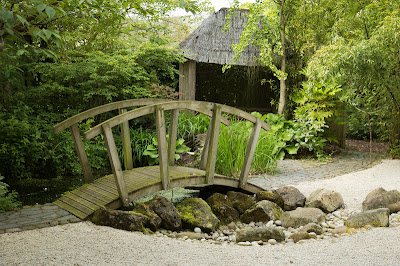 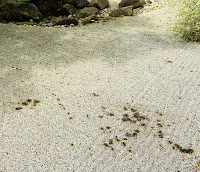 We laughed over the raked gravel remarking that the Japanese would never allow their gravel to be covered in bird shit.  Shortly after a young man appeared and raked it all clean so he may have been lurking behind a hedge and overheard us.

A Garden of Tranquillity, a Rose Garden a Damp Shade garden and my favourite a mediterranean garden (although we hoped the brightness of the wood chippings forming the path would eventually fade!) were among the many small gardens designed to give the viewer different ideas.


What struck me was that these ideas have all been re-done on GW since but somehow more recent TV versions have lacked the 'accessibility' we found here.  Every garden gave some sort of inspiration and more importantly every garden looked attainable and somehow 'real'.

A massive mistake in this border!!!! There's a time and a place for heucheras and this was not it!!! 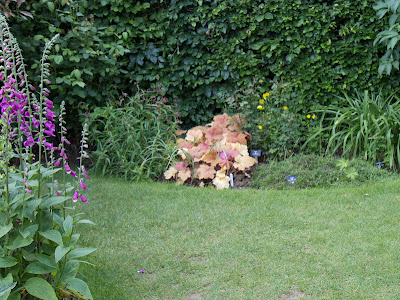 And to prove that there is nothing new under the sun and that all those of us who laughed at Joe Swift's triangular veg beds were wrong... Geoff Hamilton did them first!!!!! 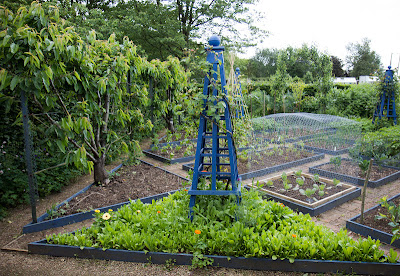 Barnsdale was a lovely place to visit with plenty to see and ideas to take home from the large organic vegetable garden to the small courtyard designs. Designer gardening it was not and the snail-chewed hostas were less than pristine - but it all felt tried, tested and solid gardening. 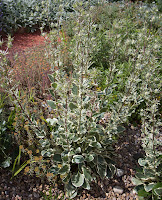 What I took home from the nursery shop was a rather lovely eryngium planum jade frost I had envied in the mediterranean garden.  I was rather disappointed that there was only one of these left - a forlorn specimen and that some woman had just grabbed the only other slightly less forlorn one.  On Lazy Thelma's advice I asked one of the staff if they had any more and he found and potted up a much brighter looking specimen for me! When we got to the till the woman who had  grabbed the other eryngium before me was most put out that I had got a better plant!!!   Ha ha ha ha ha ha!

All that was left was to drive on to the very pleasant pub we were staying at and revive ourselves with a couple of glasses of champagne, a nice meal and a good nights sleep to refresh ourselves for the next exciting stage of our journey.

In the Sock and Trollop Road Trip Part II you will learn whose lovely garden we visit and how to get the most goodies in your goody bag at a Press lunch....

I have heard Geoff's son talk about his father several times and have tight the BBC were so he had to pay for everything and the stunts he pulled. He is a good speaker.

I didnt really like Barnsdale as a whole but like many of the individual gardens since you can relate to the size and see how things would work in your own garden. I think the key is that they made the gardens quite self-contained whereas now on GW it seems to be the cottage garden border etc etc.

While the beginners' garden may seem dull, you need to remember that it was created, like the other little gardens, from a blank canvas to demonstrate techniques. And the approach worked, hence Geoff's almost sainted status today.

Unlike, of course, the current series which generally sees pottering going on in an existing garden area.

If you can beg, steal or borrow a copy of Geoff's 3 DVD set "The Geoff Hamilton Collection", which covers his three TV series "Ornamental Kitchen Garden", "Cottage Gardens" and "Paradise Gardens" I'm sure you'll find them well worth viewing.

And I'm glad you avoided driving near high cliffs!

You're not by any chance going to visit a certain "grump" up there in the Flatlands??? Could be fun! :-))