Day two of the road trip dawns to another lovely sunny day and after a refreshing night's sleep at the Inn, broken only by the sight of a full moon, the Sock and Trollop sit down to a rather good Full English breakfast - "hold the beans"!  Whose idea was it ever to have beans slopped on to your plate engulfing the fried egg, tomato, mushroom, sausage, bacon and black pudding in  pool of thin, orange mucilaginous liquid.  There is a time and a place for baked beans and breakfast isn't it - a sentiment entirely agreed on by PlantmadNige and the PG over coffee later that morning.. for it is they we are about to visit!


All those of you who think Twitter an evil time-waster should understand that it is a great facilitator of nice things.  A chance remark to Nigel Colborn (aka twittername PlantmadNige) on how we would love to see his garden, produced an immediate open invitation! Seizing the opportunity to make good this invite before Nigel got cold feet I checked he was really up for it, arranged a date that suited - and sorted! And so it was that the Sock n Trollop came to be driving around the attractive town of Stamford en route to Nigel's Lincolnshire village home. Unfamiliar with this area of the country we had found the countryside around Rutland Water surprisingly attractive with Cotswold's-like villages, mellow brick stonework but with a feel of proper 'working' villages not overly pretty chocolate box ones.  Stamford, a small town often used in Jane Austen type period dramas, was quite charming - so good we saw it twice, driving doubly around the one-way system after missing the huge sign saying "Through Traffic".  This made us slightly late for our visit - I hate being late but anything involving a car journey is very difficult to get right these days. 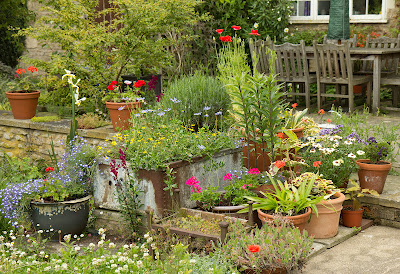 We arrived to find Nigel and the PG (Photographer General - real name Ros but I'm afraid she will always be 'The PG' to me) already serving coffee and cake to fellow visitor VP on the gorgeous brick patio. The LazyTrollop had also bought cake (her trademark calling card) so we made fast work of that. If I'd have thought I would have taken Nigel a present of a nice caramel coloured heuchera for his garden. The 'also slightly late not quite so organised as usual' Helen Reeley joined us with her tiny poodlette Obi Wan in tow and we were off for our wander around.


I'm not going to give you a commentary on Nigel's garden, suffice to say it was everything I have always wanted for my own dream garden. Crammed with flowers, colour, interest - you could tell this was a well-loved garden and who wouldn't love it? It glowed in the first sunshine we have had for so long, it's beauty and warmth inducing a  relaxed well being and a feeling that all (despite the owner being famed for his blogging 'grumps') was really quite right with this world.

I left it to the others to ask intelligent questions and drifted along as is my wont just absorbing the colours, the smells, and the atmosphere. It's not a huge garden - wrapping around three sides of the house and outbuildings - but it manages to combine something of everything, shade, woodland, meadow, gravel garden, veg patch, and every plant you have ever lusted over including the dianthus cruentus which Nigel gave a proud place to in his garden well before Cleve West made it must have plant of the year at Chelsea 2011.

And at last we got to meet Wendy, Nigel's greenhouse we have heard much about on his blog.


An absolutely marvellous visit - not just seeing the garden but the delightful company of Nigel and Ros, warm, wonderful, witty, with a tiny hint of wickedness. I've been feeling a bit down this year with various neighbour and general 'people' problems whatever and it is not an exaggeration to say that they went a long way to restore my faith in humanity.

I got two hugs by the way - one each on arrival and departure.  Nigel gets 9 out of 10 on the hugging scale because unlike other more practiced huggers I don't think these hugs are given out as freely and are therefore doubly precious!

Coming soon In Part III we travel to Easton Walled Gardens and I tell you about short cuts, lunch and streams that flow north
Posted by Arabella Sock at Tuesday, June 26, 2012

Lovely - thanks for sharing, sorry I could make it.

I do like the meadow/lawn and its nice to see it having read Nigel moaning abotu grass cutting etc.

I await the next instalment with bated breath

Good. You're still avoiding the cliffs.

That "meadow" (presumably at the front) presents a wonderful welcome.

Wendy seems to have a beneficial effect. Nigel clearly grows under her influence and do you notice he also has more hair which isn't so light coloured?

What a wonderful and fun experience. Sounds like a fab road trip. I still love that dianthus and it is still hard to get hold off on the web.
K

Arabella,
You've been much kinder than you should - and that's sweet of you.

You didn't mention the appalling weeds; the fact that the PG and I had to stand in Wendy's doorway so you couldn't see the wreckage inside; the hopeless planning, where the spring borders looked just plain dead before the summer stuff had got going and the grass edges which probably haven't been clipped since Easter and are therefore pleasing only to Anne Wareham.

It was LOVELY having you all and a great boost to the spirits. And if you bump into Lazy T, just mention that we saved the last Artisanal Fairy Cake then ceremonially halved it to nibble with a glass of extremely good Champagne on Sunday morning.

Baked beans should be illegal before noon. They could never belong in a proper British breakfast.

Stamford was used for Middlemarch, so it's George Elliot rather than the other lady - or perhaps it was used for Austenish stuff as well. Victor Lewis Smith wrote an extremely rude article, in the Evening Standard, about Stamfordians called 'Choking on Middlemarch Fudge'. It made me laugh out loud, on the train from London, causing other passengers to tear their faces from their phones and glare at me dispprovingly.

Hi John - you never know there might be a cliff in the final episode!

Karen - I think we were both on garden 'road trips' around the same time. It's nice to think of little groups of us criss-crossing the country in pursuit of horticultural happiness.

Nigel I haven't been kinder than I should. I wouldn't have noticed the weeds if you hadn't pointed them out - no because they weren't there but they were scarcely noticeable in the exuberant and dense planting. Along with the potager at Farr's garden that I visited a few weeks back I am loving the free and loose look of gardens with an overspill of plants and seedlings. It works so much better than the more pristine style with 'everything in its place' so that weeds are much more obviously out of place and need to be pulled up immediately.

I will grant you that Wendy needed a little TLC.

What a lovely garden, and sounds like a great day out all round.
Sara