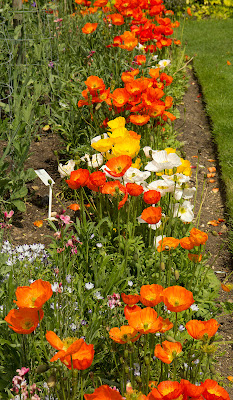 Easton Walled Gardens has been on my 'must visit' list for a while.  This is another good thing about twitter - it wasn't somewhere that would have come under my radar if it hadn't of been for Lady Ursula Cholmeley tweeting as EWGardens about some of the events and work that has been happening there.  Easton was lined up for the second series of the thoroughly enjoyable Landscape Man which disappointingly was never taken up.  [This absolutely amazes me when you get such rubbish as Titchmarsh's  'Love Your Garden' on TV which has now become like a poor man's Groundforce - and given that Groundforce ended up very downmarket it is like being the equivalent of a poor man's Poundland!]  Anyway I could tell Ursula was a fun person because, having met Matthew Wilson, she has always laughed at my Landscape Man teases.  When my invite to a Press Lunch at Easton (along with pals LazyTrollop and Helen Reeley) arrived we knew we must do everything possible to ensure we could attend - not least because it's not often I get to mix with eminent gardeners and landed gentry even despite my title as Countess of Cashmere!

Serendipity decreed that Nigel Colborn's home lay a mere 20 minute drive from Easton Walled Gardens and that he and the PG had also been invited to lunch. So our little party set off in convoy to follow Nigel's 'short-cut' route. I opted to ride with Helen so I could fill her in on (the potted version) of my life story and get up-to-speed on any gossip.  We followed Nigel down some pretty country lanes and then around a service station off the A1 wondering if perhaps Nigel hadn't realised we were 'doing lunch' and had stopped for a 'Burger King'.  But he drove on out of the exit and back to where we had turned off.  Eventually we arrived at Easton - a little late but then some 'short cuts' are longer than others. 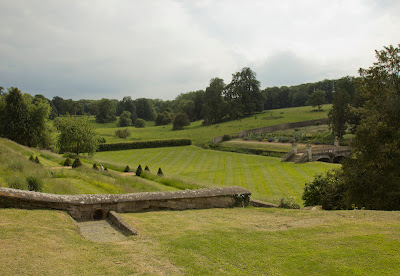 Easton Walled Gardens are set in pretty Lincolnshire countryside - 400 years old they were 'lost' during the wars and eventually inherited by Ursula and her husband. Ignoring her husband's advice that it was an impossible task, Ursula has been successfully restoring them since 2001.  I won't repeat the details as other attendees have written about them but I do urge you to read about them here and James A Sinclair also mentioned them in a recent blog.  The beautiful house had originally been requisitioned during WWII but left in such a state by grenade tossing, gun firing soldiers letting off steam that it had to be bulldozed after the war.   In some ways I wished I hadn't known this as lamenting the lack of house in some ways detracts from the beauty of the fabulous gardenscape and in any case, there are still some lovely buildings left housing the gift shop, cafe, meeting rooms and information areas.  We just had time for a quick peek at the view from the top terrace, our first glass of fizz of the day and then we were whisked off into a charming courtyard for our lunch.

Warm enough to sit outside we joined the rest of the throng enjoying a buffet of chicken, mayonnaise and melon which was absolutely delish (so good that Helen R. has been trying to replicate it since but has so far failed) and some fabulous meringues topped with strawberry which were just how they should be - crisp on the outside, melting into a slight chewiness on the inside, so mouthwatering that I stuffed at least one into my mouth before even returning to my seat.  This manoeuvre no doubt left me with crumbs in my hair, the Bedsock is always having to remove crumbs from my hair which just appear from nowhere.  The same is true of the dirt that I seem to permanently attract under my fingernails despite constant scrubbing at them before I go out.  I feel like 'Pig Pen' from Charlie Brown - a natural, untidy, dirt collector!

The same cannot be said for Ursula, who despite her hands on work in restoring the gardens looks immaculate in a way that I am deeply envious of and will never achieve.  Ursula had organised several short talks for us - an audience referred to as eminent gardeners which included us, the usual suspects, who love to enjoy these events!

First up a short talk from David Austin Roses who have provided plants for the gardens since 2004.


Then Damian Cardozo from Haxnicks a man of such cheerful enthusiasm it was impossible not to join him in it.

I love Haxnicks' stuff - it reminds me of a gardening's version of Lakeland Plastics (purveyors of such enjoyable necessities as soft grip pegs and Klippets - you can't have too many Klippets).  Haxnicks' made my absolute favourite, greenhouse plant pots out of biodegradable bamboo and rice in a range of nice colours and with a feel of bakelite. Perfect for colour co-ordinating my seedlings in.  I spent some time earlier this year searching for more of these and was about to find out why I have not been able to find them.  Damian said that they are always looking at new innovations, some that they think will sell (the plant pots) don't and have been discontinued!!!!!!! whilst others that they are not sure about like the soft-tie wire sell like hot cakes.  The man from Franchi seeds rounds the talks off. I am already sold on their range of interesting veg in particular the tomatoes - too many tomato types too small a greenhouse...


It was at this point that the Sock, Trollop and Helen R. make their fatal mistake! Unused to these events we missed the bit where someone said "Help yourself to the goodies left on the table" and by the time we realised what was going on all the best stuff had been nabbed! The more seasoned press-goers made off with a variety of roses, bell jars, pots and other gardening accoutrements leaving some left-overs for us to pick through. Actually we didn't do too badly, Helen got one of their new mini Speedhoes although she would have preferred the larger one she could have ended up like the lady in the loos who having bagged a big hoe then had to negotiate getting it in and out of the toilet cubicle presumably in case any of us made off with it if she left it outside. I ended up with a Haxnicks courgette planting bag which apparently air prunes the roots or something (should be fun to test) and the Trollop grabbed some Bell Boy Mini Propragators but when she realised that these incorporated the discontinued pots I love she gave them to me! (Not so much that she is kind but she knew that otherwise she would never hear the last of it!)  Instead she made do with something for keeping flies off carrots on her allotment.

Reasonably content with our haul and the fact that we were also given 'goody bags' with more bits in, including some of the sweet pea seeds that Easton is famed for, we wander off for a tour of the gardens.

They are lovely and it is quite astonishing to think of the amount of work Ursula and team have put in in such a short time to achieve something that feels as if it has been there for decades.

I would put an infinity pool where the house would have been and spend my time floating in the water and peering over the edge and down the terrraces to the stream, beautiful borders and walled garden on the opposite side of the valley. 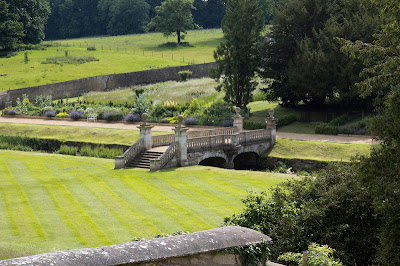 This would make a wonderful setting for outdoor theatre or concerts with players emerging from the yew tunnel and onto the bridge.  I once went to see Midsummer Night's Dream at Arundel Castle where all the fairies ran along the battlements holding sparklers.  It was quite magical and if I hadn't been half frozen and damp on an English summer evening I would have enjoyed it. 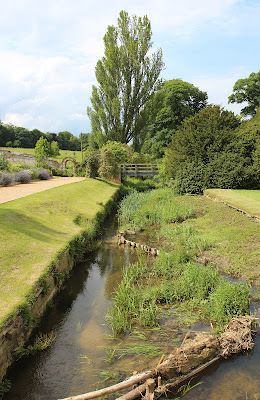 We wandered down to stream running through the valley.  It bothered me as it seemed to be flowing North and in my mind I would always expect rivers to flow downhill which is obviously South. I confused everyone with this bit of non-logic and eventually got my compass out to ensure it really was flowing in the wrong direction. (Handy hint: Never go anywhere without a compass, whistle and torch in your handbag - plus a couple of klippets of course.)  Nigel produced his mobile with compass application and then the PG produced her handbag which had a magnetic clip on it throwing out all our readings.   You might think this is all a complete irrelevance but I have to disagree - it is very important to know where you are in the world. 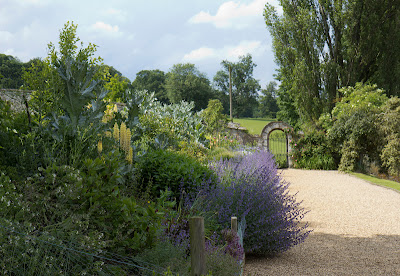 What I liked about the gardens is that Ursula is restoring them with a modern interpretation instead of trying to totally recreate them as they were.  Looking at the old pictures it all seems very tight, prim, formal and overly structured whereas now it seems to morph gently into the rather lovely surrounding countryside.  I wanted to follow the wrong flowing stream out of the gate and into the beyond and just keep exploring but it was time to go.  Thank you to Ursula for the invite and a hugely enjoyable afternoon.

Back to the Colborn's for more cake and a refreshing cuppa and then a quick zoom down the motorway to our respective homes.  The road trip is over but the memories of a fab fun time with friends remains.

The man with the hoe is Bob Sherman of Garden Organic.

Dear Countess, it was so great to see the road trippers who brought the only perfect weather day of the year with them and added an air of quality cashmeriness to the whole day. Ux

Sounds like an amazing road trip. Another great garden and I love that Gilia tricolor too...

I love Easton Walled Garden ... especially the wildflower meadows! Sounds like an excellent day out :-)

I'd love to see more country houses knocked down, or recycled anyway, especially those with the grecian frontages, they seem to be ten a penny. The gardens would often look so much better without them. Trentham gardens is a case in point and well worth a visit if you ever get up this way, it's had squillions spent on it and the results speak for themselves. Just avoid the ghastly "shopping village". Toodle pip.

Ursula - Thank you for the plant name I have put it on next years seed list. I loved the way the colour of each flower head varied from pale to deeper purples.

Simon - I'm with you on the country houses, not that I want them knocked down but that the main interest of these places is the gardens not the house. I had enough of looking round musty old houses locked in time as a kid - the most interesting things are the bathrooms, kitchens and photos so that you can get a better idea of how people lived than some stuffy drawing room full of antiques. I have put Trentham on my list - I have put your allotment on my list too!!! Ha ha