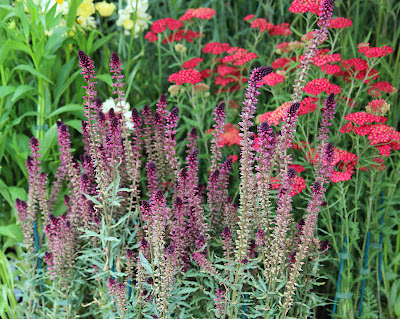 Hampton Court day dawned and I woke up with bad tooth/sinus pain as I have for the last month.  I knew I wouldn't be fit to drive so the Bedsock took me detouring via the most useless time-wasting doctor in the entire world.  The doctor spent half an hour explaining to me how antibiotics and steroids work -  my point being that they haven't worked and I have spent the last month on the internet researching it!  So I came out angry, still in pain and none the wiser as to whether it was sinus or tooth pain that was becoming more and more excruciating. I should have gone home of course but dosing myself up on even more painkillers I foolishly decided to keep going. It was a mistake.  So in a diversion from my usual blogging style here is how RHS Hampton Court looked from a bad-tempered perspective.. 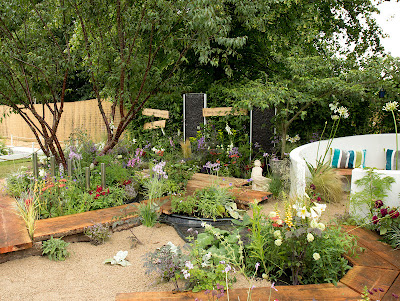 I might buy one of these and lean it over the fence into nasty neighbours garden - only he will probably think it is good!!! 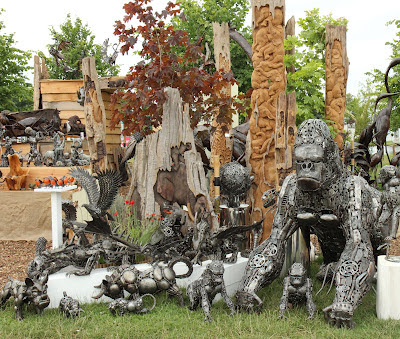 Dobies seeds - some bastard had eaten most of the freebie cream scones! I couldn't even feel tempted by them - things must be bad. 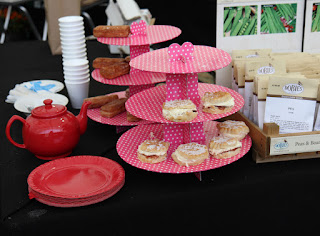 I knew that Mark and Lia would be pleased to see me. 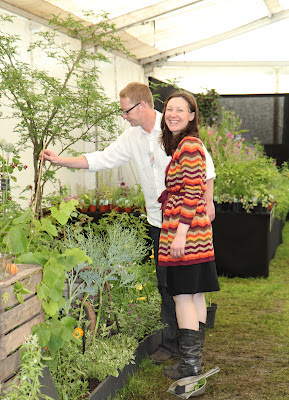 Shortly after I saw a butterfly that matched Lia's dress. 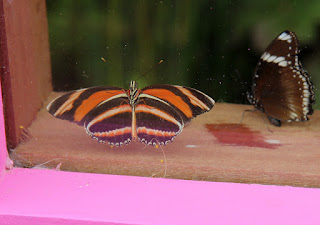 It was in one of the conceptual gardens. Unlike when I went to the Wisley butterfly display a few years back, most of the butterflies in this were alive. 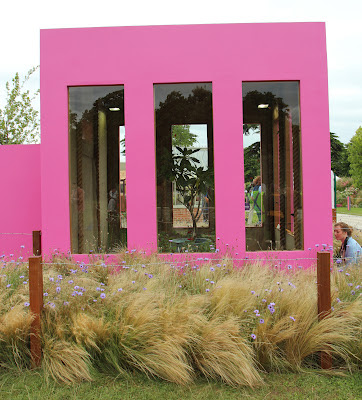 All the conceptual gardens were about worthy but miserable things, rape of Nicaraguan women, London bombings,  loss of the coral reef,  five stages of emotional despair - I knew what they meant...

Except for Simon Webster's  'Do not adjust your set'  which wasn't 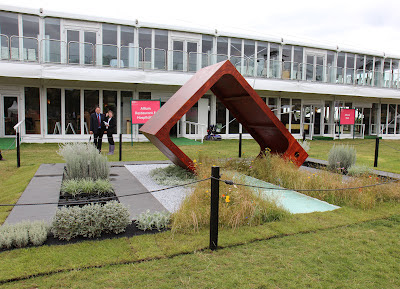 And this which represents Chaos - who'd have known? 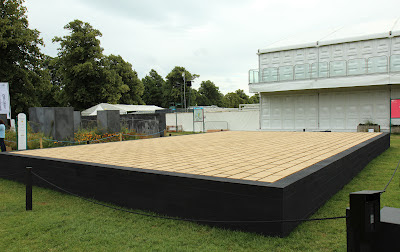 I rather liked these swing chairs and so would the cats - perhaps not that colour tho'.  I nearly crawled in to sleep until it was time to go home only at that stage I was still hoping to get a glass of wine to fortify myself. 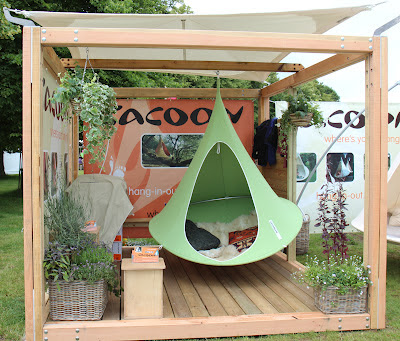 Eeek! The only saving grace here is the heucheras!!!! 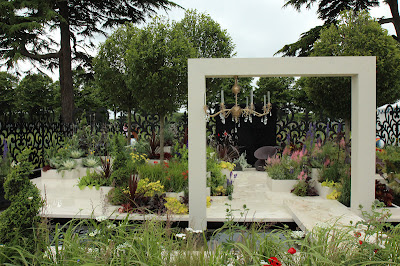 Only kidding. There weren't any saving graces.

This was the only time in the day I smiled!!! Joe Swift was filming and kept fluffing the word fumarole.  I laughed out loud.  I tried to make the guitarist laugh by pulling faces at him but he kept absolutely poker-faced throughout! 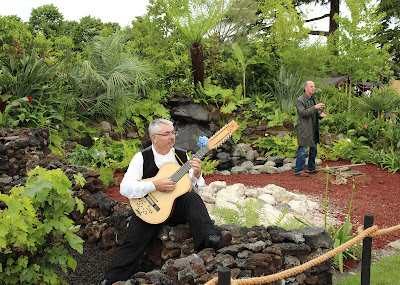 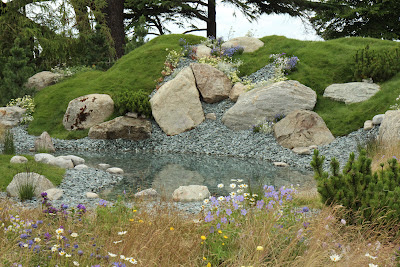 Also its been hinted they gave out swiss chocolate later on and I didn't get any. :(

I've seen this of Tony Smith's before haven't I? 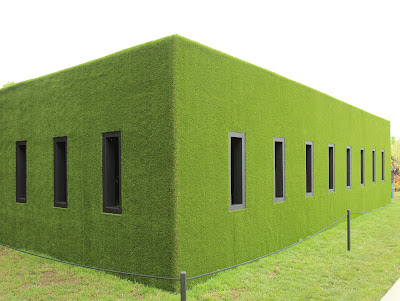 It's Tony Smith's  Ecstasy in a Black Box from Hampton Court 2008 only covered in a job lot of Easigrass! 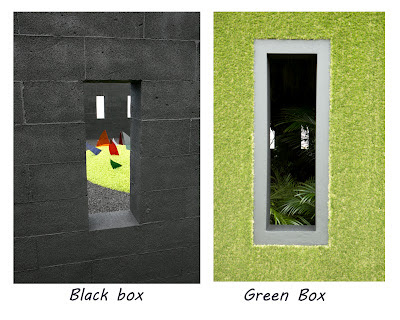 Temper and pain are getting worse so I am almost overwhelmed with joy to find the Toffee Vodka stand!!!!!!! 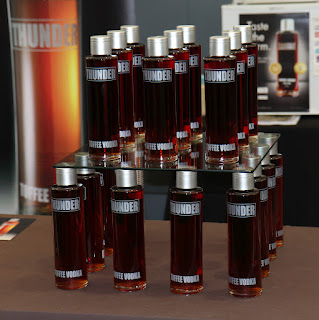 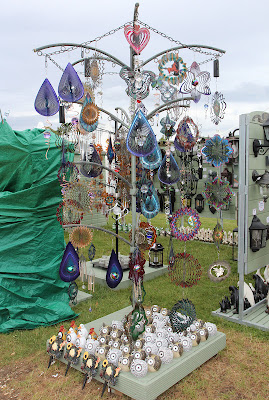 At last! on the Ecover stand they are giving out samples and, thank the Lord, a glass of fizz!

At least they said it was fizz - it could have been washing up liquid. 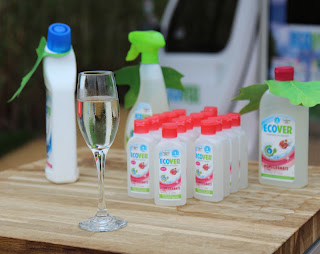 Even the sight of the Boy Beardshaw couldn't revive me... 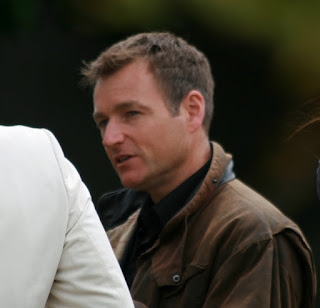 Not a smile for Monty in his peasant jacket 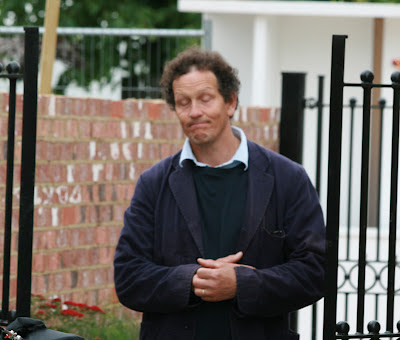 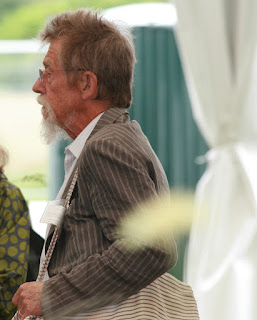 The sad sight of an empty, closed, bar. Champagne and Pimms everywhere nor any drop to drink. I sat in the cold rain with no shelter for an hour waiting for the Bedsock to collect me. 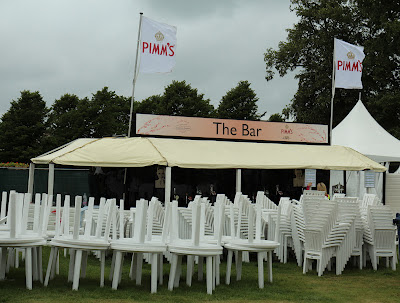 Apart from the heartbreaking idea of so many plants I wanted to buy and couldn't because the stands weren't open... there was just one thing I wanted from the show - a large tin tub from Garden Brocante located near the entrance.  I needed the Bedsock to OK it as I no longer trusted my judgement and in any case couldn't carry it.  Despite the fact that my (and others) Press passes had been given barely a glance by anybody all day the guy on the entrance put his foot down and wouldn't let the Bedsock in without a pass even though I explained it was to help me carry something heavy.

Let's all hope that normal service is resumed soon.
Posted by Arabella Sock at Tuesday, July 03, 2012

Oh dear that does sound like a bad day and I am sorry but I have been laughing through most of the post.
I suspect your angst and misery has highlighted some of the more amusing/annoying sides of garden shows.

I was pretending to "enjoy" the Swiss garden (for the sake of my forebears if nothing else) when I was offered one of the "little chocolates". Only it wasn't. It was one of those oh so worthy onomatopoeic herbal sweets.
"Ricola" I gagged.

Wonderful post so honest its probably what most people think except'Kings New Clothes' stops them saying.Hope the pain subsides,but returns for next show!

Can't believe I missed you! Have very similar photo of Joe Swift, which means we must have been standing there at the same time!!!! Grrr! Lovely post. Made me giggle.

You needed me there!

Oh dear. Hope you got a drink in the end (and I've been giggling away at this post too...)

So sorry about the pain - but you'd have felt even worse if you hadn't gone. And we wouldn't have had your take on it, which would have been quite a loss!

I hope things have improved and you have made up for the lack of bubbly since.

I thought Mr D. was at Hampton to mix up drinks and cocktails, and you didn't get one???
Sadly Swiss gardens these days look a lot like the one in your photo - I am half-bald from tearing my hair out in despair from seeing lovely old gardens being turned into these - easy-to-maintain wastelands everywhere.
Apart from that, good post.

Hope you're feeling better and have had that glass of something in the meantime.

Petra - I saw your Joe Swift picture on twitter and as I have almost exactly the same I must have been standing right next to you!

Ms. B. I did indeed need you there - Jooles and Sean gave me lots of hugs but I needed my cake-buddy.

Helle - Unfortunately Mr. D. was far too focussed on tweaking his vegetables when I turned up. THis was a shame as I had planned to star him in a real cool Sockvideo which would have ensured he hit the big time!

I am considering starting a new set of medals at RHS shows related solely to the amount of free food and alcohol on offer. Jordanian garden - 2012 Best in Show.

Commiserations for the pain and grumps, but you have created an hilarious post from your despair. Quite brilliant.