After the astonishing success of this years Conceptual Gardens at RHS Hampton Court- I've decided to put forward an entry for next year.  I have come up with two very different conceptions and I wondered which of these you think most likely to get gold! 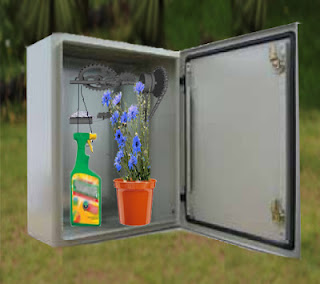 We place a living catananche into a steel chamber, along with a device containing a spray of glyphosate. There is, in the chamber, a very small amount of hydrocyanic acid, a radioactive substance. If even a single atom of the substance decays during the show period, a relay mechanism will trip a hammer, which will, in turn, pull the spray and soak the catananche.


The Nine Circles of Hell

An ever-decreasing circular garden representing the nine levels of hell.


Level 2.  Every day a new Amorphophallus titanum opens and there is never an escape from its all pervading stench

Level 4.  There is a bed of roses and a naked Rachella lying on it... Bad enough you might think - but....  these are the roses!

Level 5.  A person emerges from some slightly wavy hedges

Level 6.  You are in a room with a television on watching never ending repeats of Love Your Garden

Level 7.  In this level you are thrown in up to your neck in rotting horse manure

Level 8.  Same as level 7 but you are only as tall as Chris Beardshaw

You have reached the deepest level of hell

In Level nine there is only you and one other person for eternity...

and that person is Christine Walkden

Whichever is chosen, you're onto a winner.

If you can squeeze Higgs Bosun somewhere into exhibit A (especially that dodgy graphic which is said to prove it happened), that one gets my nod.

I would give you a gold for both xx

Genius. Though I'm going to have nightmares now.

Is that tooth still hurting, perchance?

I'd like lily beetles to be in there somewhere, surely they are worse than the wavy-hedged person?

It seems every day a Amorphophallus titanum does seem to open somewhere anyway! well it does in the world of botanical garden press releases anyway!

The worrying thing about all of this is that it could so easily be real ...

you'll find that someone has picked it up and run with it, then you'll see it at HC next July.