I've hardly blogged this year, a combination of health problems, busy sorting out Sock's Country Pile our new 'escape home' in Dorset and last but not least the bloody awful weather which has left me unenthused about doing anything in the garden other than attempt to save my greenhouse tomatoes from blight!  I had to miss the RHS Malvern Show in April which normally triggers off my HRT (horticultural retail therapy) for the year and whilst I love going to Press days at Chelsea and Hampton Court the drawback is being unable to purchase anything.  By the time the non-summer turned up I was past the point of bothering and found that left to it's own devices the garden actually did quite well without me, self-seeders spreading and turning up in all sorts of interesting places.

The trouble is that everyone has felt like this and plant retailers have had a bad year - particularly the smaller specialist nurseries. So I was more than pleased to find the RHS Wisley flower show 5-9th September overflowing with happy gardeners in full spending mode.  And so was I - so convinced I wouldn't buy anything that I had failed to fill my pockets with cash and had to borrow money from my Heucheraholic friends Jooles and Sean. So here I will give a shameless plug to them as they are lovely people and their healthy heucheras are second to none! Go and buy some and if you can't get to Wisley they are having an Open Day at their New Forest nursery next weekend 15th and 16th September. 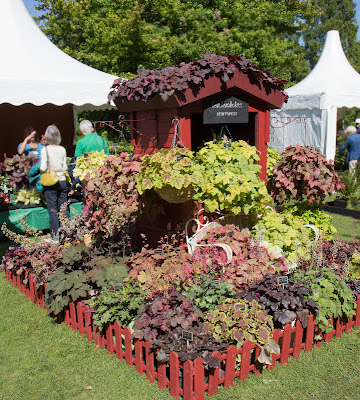 Wisley is always a pleasure to wander around and the added draw of the show in the warmth of a late summer's day totally re-ignited my gardening enthusiasm.  I spent loads and I made notes of loads of stuff I want for next year.  Edulis was my favourite stand with a particularly attractive display which would have been my vote for 'Best in Show'. 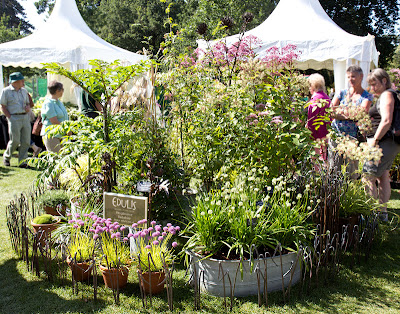 They have loads of exciting edibles and I will be ordering a wasabi plant from them and one of these for next year - I've never seen an aralia cordata (Japanese asparagus) before and it is absolutely stunning.. too good looking to eat


The show was filled with exuberant colour... a little too exuberant in some cases! 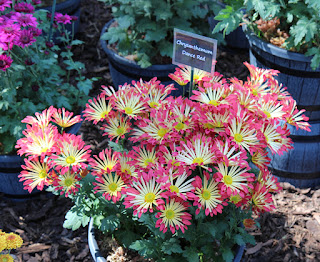 I bought one of these 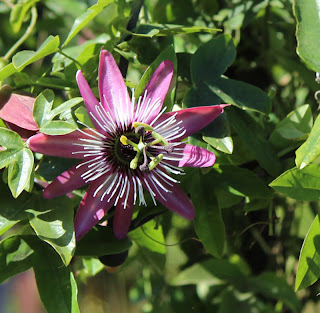 for some reason until recently I thought passiflora only came in the white and purple bog standard one but Tynings Climbers (who hold the National collection) had loads of different ones. I grew one years ago and all the flowers turned and looked over the wall into next doors garden so I will try this in a better position.

Hardy's Cottage Plants are always stacked with 'must haves'.  I liked this combo of lobelia 'Hadspen Purple' and the billowy selinum wallichianum so bought both. 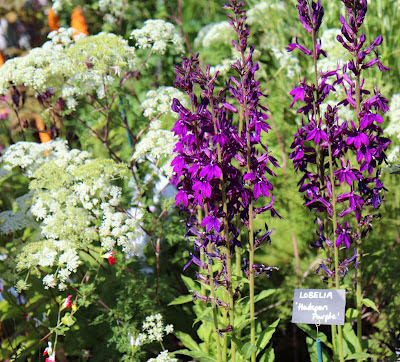 Various heritage seeds from Pennard Plants, bulbs from Rose Cottage Plants and some succulents I had hankered after at RHS Hampton court but couldn't buy, filled my bags to bursting.  The only drawback was my diet meant that it was a No Cake day and Wisley have such very, very scrumptious cakes.  But I stayed strong dear reader - you should be proud of me, although I was so hungry that even the sight of this was making my mouth water... 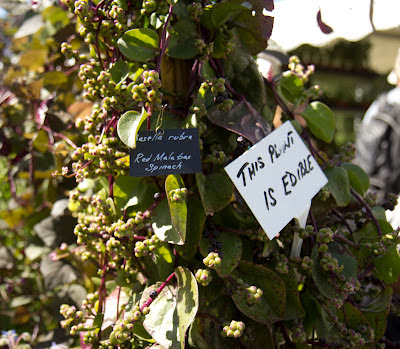 A perfect September day, warm and sunny with that kind of visual clarity that brilliant blue skies bring to this time of year.  I feel horticulturally re-juvenated! It may be very late but at last the buying season has begun!
Posted by Arabella Sock at Thursday, September 06, 2012

As a special treat we will taking my mother to the "show" for a spot of luncheon. Well, on your 80th birthday you deserve something special.
....and yes we WILL be eating cake !!!!!

Paul's (Edulis) display & selection of plants is superb isn't it. I just hope you've left something for the rest of us.

tediutn 309Nothing like a bit of HRT, it's good for the soul.

Hadspen Purple is a really good plant. I have had one for years. It has survived the worst of winters and splits happily to move all over the place. In fact I could have given you some if you were nearer!

Hope you are now well over the tooth saga.

Annoyed that I completely forgot about the Wisley show! Heard it was a good one, which you've now confirmed! Must must must must open, ever dusty diary more often!!!

Sounds like a great day. You need sunglasses for that Chrysanth. Sometimes breeders take things a bit too far.

It has been a very strange year. So much enthusiasm at the start only for it to be washed away. Parts of my own garden make me wince because I gave up on them months ago. Fortunately us gardeners are an optimistic breed and, of course, next year will be amazing.

Hmm, suspect our purchases at Malvern more than made up for your abstinence!
You found a few lovely things at Wisley to make up for it too, the lobelia/selinum combo is really pretty.
Sara

We all need a good dose of HRT - glad you found some. Love that passion flower
K