“There is a willow grows aslant a brook
That shows his hoar leaves in the glassy stream.
There with fantastic garlands did she come
Of crowflowers, nettles, daisies, and long purples,
That liberal shepherds give a grosser name,
But our cold maids do “dead men’s fingers” call them.
There, on the pendant boughs her coronet weeds
Clambering to hang, an envious sliver broke,
When down her weedy trophies and herself
Fell in the weeping brook. Her clothes spread wide,
And mermaid-like a while they bore her up,
Which time she chanted snatches of lauds

As one incapable of her own distress,
Or like a creature native and indued
Unto that element. But long it could not be
Till that her garments, heavy with their drink,
Pull'd the poor wretch from her melodious lay
To muddy death.”

When I told my friend Fat Rascal (who lives at the top of a mountain in France) about our visit to the enchanting Pre-Raphaelite exhibition at Tate Britain she asked "And which painting were you?".  I understood what she meant immediately for in days of yore, when we were young and nubile, the most prized female image was that of a flowing haired Pre-Raphaelite..  I was Ophelia, drifting, downstream to her watery doom, a dreamy, desirable, but ultimately tragic figure touched by melancholy and madness. She embodied the angst of my teenage years,  filled with thoughts of a beautiful suicide I had no real intention of committing (mostly because I feared that no-one would actually care!)  Now when I view the  painting it is more breathtaking than even my teenage dreams could imagine, the colours vibrant and ethereal, her 'weedy trophies' a gardener's inspiration.  It remains the most famous and my favourite.

Fat Rascal I see as the Lady of Shalott who also has a tragic, watery, doom her crinkled locks flowing down to her waist as she drifts towards Camelot.


Lying, robed in snowy white
That loosely flew to left and right —
The leaves upon her falling light —
Through the noises of the night
She floated down to Camelot:
And as the boat-head wound along
The willowy hills and fields among,
They heard her singing her last song,
The Lady of Shalott.


We grew our teenage hair long and lustrous - I once walked down a leafy avenue by the side of a park when an elderly man called across the road to me "You look very beautiful with the sun shining on your hair... "  I accepted it as my due and smiled wondering if perhaps I reminded him romantically of his long dead wife.

Whilst I loved the femininity of the fashions of that time, all long dresses and purple Biba eyes,  my china-doll face belied the dichotomy that I had remained a complete tom boy and was a ladette years before the term was even invented.  I remember a beautiful and fragile Victorian dress I had bought from an antique shop, all linen, lace and velvet, perfect for a Pre-Raphaelite but it got worn to one too many raucous parties and ended up cruelly doused in beer and red wine never to recover.


Many of the Pre-Raphaelite paintings are based on  mediaeval culture, myths, Arthurian legends, or Shakespeare's plays,  stories that I had loved and crammed my overflowing imagination with as a child.  I had a treasured a beautifully illustrated copy of Charles and Mary Lamb's Tales of Shakespeare - sometimes scorned amongst scholars this book, presenting the plays in short story form, stood me in good stead for years of pub quizzes familiarising me with the various characters of Shakespeare's plays without having to read all the overblown texts.  And now the characters are pictured in front of me at this fascinating exhibition bringing their own life to the poetry and plays I read so avidly as a child.  The picture below of the Lady of Shalott by William Holman Hunt was my second favourite. I hadn't seen it before and the colour and movement in it was breathtaking her hair and her world whirling around her as 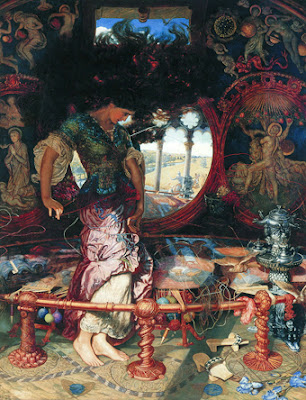 There were many, many more paintings and not all girlie fantasy ones either although to his surprise the Bedsock found these incredibly interesting as well.  A fantastic exhibition, well worth the visit. Make sure you get an audio commentary and allow up to two hours.
Posted by Arabella Sock at Thursday, December 06, 2012

I love the pre-raphaelites but couldnt get to the exhibition. There is however a very good selection at the Birmingham Museum of Art which is free and the adjacent Cathedral has some wonderful Burne-Jones stained glass windows.

Oooh thanks for that - I will make an effort to go and see them.

I was the Lady of Shalott - I looked very like that and as I need a haircut at the moment my hair still does look like that. Unfortunately the face and figure do not.

Nowadays I am more the Lady of Shallot.

A friend of mine with a vast victorian house has large pre-raphaelite prints everywhere. I love them, but could not live with them, they are beautiful but quite depressing to live with, as I found out after almost a year of living with her.

Thank Jro - you reminded me to check my Shallot and Shalotts on the blog and of course I had got them all mixed up! I thought about that when I was writing it but still managed to do it. All fixed now. I think the kind of pictures you would want to live with are totally different to seeing them in a gallery no matter how gorgeous they might be. I don't like anything with faces or figures of people (particularly if I don't know them) as it feels like inviting a stranger into the house!

Yes, I make a huge effort not to get any people in my photos for a similar reason.

Lovely photo of teenage Sock. My hair is still about that length, but it's thin and straight, and I always wanted it wavy like yours. I used to spend ages perming it and trying to time it just right to get the rollers out before it got too curly.

The Pre-Raphaellite collection at the Birmingham Museum and Art Gallery is the finest in the country. Sadly I didn't appreciate them as a child growing up in Brum. I recognise quite a few from those you've featured, so I must have been taking them in sub-consciously on the way through to the fossils, mummies and other exciting artefacts on display!

Sock, you were one hot tot. (obvs you still are but just thought I'd mention).