It's been a while since I updated you on the 'kitten's progress'.  Of course Spook isn't a kitten any more he is just a very naughty boy!  In fact both Hebe and Spook fall very definitely into their gender specific roles and Spook is absolutely unmistakeable male.  None of my female cats would ever have been so inelegant as to lie legs akimbo exhibiting themselves in such a masculine manner! 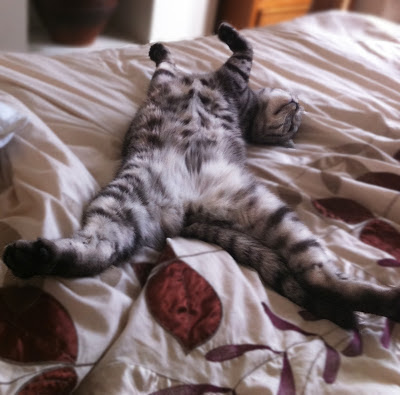 Spooks exhibitionism brings to mind a slightly unpleasant image from years ago when friends described their housemate, Bill, as forever lying outstretched on the couch in his underpants, legs splayed, whilst simultaneously eating pizza, chatting on the phone and scratching his balls.. Who said men can't multi-task?

Spook is a cat of simple, but often unsavoury pleasures.  He likes water. He likes to sit in the sink alternately batting the water with his paw as it flows out of the tap and licking the drips off the end of it.  He likes to observe me in the shower like some furry little voyeur, his nose pressed up against the glass cubicle. But it is not me who is of real interest it is the splash of the 'rain' shower and the water swirling away down the plug hole that he fixates on.  He also has an unfortunate fascination for peering down the toilet. You are asking yourselves what kind of people leave the toilet seat up for the cat to spend his time gazing down the bowl?  We don't.  He sneaks into the bathroom behind you like a little silver spotted shadow when you are too befuzzled with sleep to notice. One morning as the Bedsock went to pee, a furry head shot up between his legs to peer down the bowl and narrowly missed being caught in the line of fire. 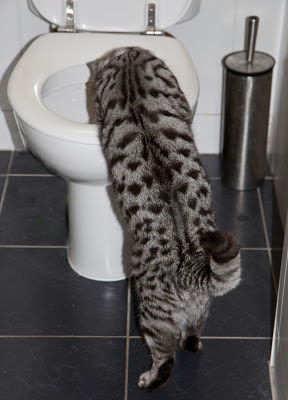 Spook likes small things.. my small things.. my intimate, small, things.  The old bureau that serves as my dressing table is his treasure chest, the compartments full of small objéts that he can ferret out, carry around and hide in one of his secret places.  Curled up on the sofa watching telly downstairs, a sudden thud on the ceiling will herald the arrival of Spook, jumping down from the bureau and bringing his latest trophy downstairs to us for a game of fetch. We keep a supply of shower caps, stolen from hotel stays, which he likes crushed into a ball and thrown for him to retrieve. No matter how many times I put the packet of cotton wool pads back in the bureau they reappear on the living room floor.  Panty-liners in their little pink packets will be placed each on a separate stair, the trail once culiminating in a little tower of pink packets neatly stacked on the landing.  Scent and make-up samples, lipsticks, the screwed up packets from my HRT patches, all join the little procession of 'found things' that he hides or deposits at our feet and waits with patient insistence in pounce-ready 'on his marks' mode until they are thrown for him.

Spook wakes up to play as we are ready to sleep and no bed-time is complete without the 'fetch' game. Just as lights are about to go out he appears on the bed with object in mouth for us to chuck around the bedroom for ten minutes.  His latest treasure, a (wrapped) tampon which we named 'Mousie',  was hurled around the room for him until eventually too tired to continue we hurled it out of the bedroom and down the stairs quickly closing the bedroom door whilst Spook hurtled after it.


The Bedsock awoke the next morning to find a tampon next to his nose and Spook sitting patiently waiting for 'Mousie' to be thrown again.  'Mousie' lasted several days before Spook finally killed it on the bedroom carpet.


And what of Hebe in all this you ask? Hebe uses the distraction to squeeze herself into the back of my knicker drawer, hiding to avoid being chucked out of the bedroom for the night.  When the bedside light goes out, signalling the 'all clear' Spookwise and I am sleepily snuggling into the duvet, I will suddenly feel a warm pressure against the small of my back as Hebe takes her place for the night ensuring that her stretched body encompasses the vast majority of the bed.  As I drift off I can hear the distant scuffles of a Spook patrolling the house in search of a new small object to destroy.

Brilliant. What a character!
Our boy-cat has a similar fascination with running into the cloakroom to peer down into the toilet given half a chance. I've seen him starting to balance himself into it too - a very slippery slope - so I suspect it is part of his continual obsession with drinking water from strange places.
Now that the Christmas tree has gone, taking with it his favourite source of pine-flavoured water, he's having to make do with his water bowls again - indoors at least. Obviously far less fun...

But my first thought was:
' Knicker-wettingly funny. Pass the panty liners - the unchewed ones.... '

I must admit to suffering a little cat envy. Perhaps you could all move in next door?

Woohoo another kitten diary - you and Spook have mad a brilliant start to my day. So funny with him lining pink packets up on the stairs.
Our now rather grown up 8-year old cat, Takeshi, still chases and attacks "noses", although not as much as he used to, and I miss it. He does come to snuggle up Hebe-like, though.

Our Jess is currently exhibiting unsavoury habits and I wish I could summon the same sense of humour about it as you have done here.

Something (probably her brother) has spooked her whilst we were away for Christmas and she's been using the stairs middle landing as a loo.

Gawd knows what we'll do if this doesn't remove the smell. Our previous daily attempts of just washing the carpet didn't work :(

Hillwards my cats are the same, they don't seem to like their water bowls (despite trying different shapes and materials for the bowls) far happier drinking dirty water. Spook will hop into the shower after I've got out and roll around in the damp and lick water from pooling bits. Very odd.

Sue, on the rare occasions we have unexpected visitors I have to do a quick recce of the hallway to make sure there are no 'unmentionables' that Spook has been playing with lying around.

Helen, we would love to move next door. Spook isn't as popular with the neighbours as he might be - I can't think why although I blame the nasty neighbours for this not Spook.

Helle - glad you found it funny. Spook occasionally nips our noses with his little sharp teeth if he is feeling particularly affectionate. I wish he would cuddle more as he is very soft and fur like silky velvet but the only time I get cuddles is first thing in the morning when he wants his breakfast.

VP - what a nuisance about Jess. I left a suggestion on yr blog but it is very difficult to shift an idea from their heads once it is in there. Good luck!

Hilarious - I love a cat with character.