Hebe, Spook and the Bunny from Hell!


The cats are incarcerated.  Despite the fact that this is of their own volition, it being just too bitterly cold and windy for even Spook to brave the outdoors, they blame me. Every look, every gesture, every clawing at the furniture with spiteful claws, is aimed at punishing me for the horrid weather. In the afternoon when the tail end of a nasty cold has left me so exhausted that I retire to bed for a nap, the cats accompany me spreadeagling across the kingsize mattress, sequestering my hot water bottle and pushing me, with my knees up, into one tiny corner. There we three doze, as much as you can doze with Hebe pressed behind my back, snoring and groaning and Spook, a deadweight across my feet which is bound to result in a nasty cramp for me at some stage, emitting occasional nasty smells - Spook that is, not me.


At least I know where Spook is when he is not outdoors, disappearing off and exacerbating my OCD about locating him, or sitting on the back wall psyching out the Hated Neighbour's rabbit.  And this brings me to the crux of the matter.  Hated Neighbour, as you may remember, moved in a few years ago refurbing the house (the first of the neverending procession of house rebuilds near me) and trashing the beautiful, if slightly old fashioned, garden the elderly lady who had lived there had tended with loving care. The Hated Neighbour who ripped out all the shrubs at the end of his garden destroying all our privacy.  The Hated Neighbour who installed outdoor lighting that is like having car headlights full-beamed right into our house when he turns them on. The Hated Neighbour who, after being asked not to dump his stuff on our shared wall, immediately put three watering cans on it. (This to block the entrance I had left through our trellis so I could get onto the wall to maintain both it and the climbers the previous owner had mingling together with mine over the boundary.)  The watering cans placed there supposedly to stop my cats leaping through into his garden and beating the hell out of his nineteen year old daughters' rabbit.  You are asking yourselves "Why would someone rip out all the boundary shrubs on all sides of their garden to create an open plan effect if they wanted to deter feline visitors?".  This is a question I frequently ask myself and I have no answer.


So on top of my OCD about Spook slipping out between the houses onto the road I also have 'Bunny Worry'.  Before the Great Garden Trashing took place and every bit of greenery removed by "the man who doesn't like plants", the bunny was put out in a moveable cage surround where it could nibble at the grass it had been placed on. Hebe and Spook showed some interest in it at the time but it was the fox family who really got their juices flowing - once when I gazed through my lovely vine covered trellis I saw Daddy Fox standing on top of the cage with Mummy Fox and Baby Fox sniffing around the outside. Poor Bunny, who is quite a handsome creature with long floppy ears and a quizzical expression, was stuck in the middle hoping the wire netted cage would hold! I did tell Hated Neighbour about the fox problem but he wasn't interested other than to say "I don't like foxes in my garden".  You are wondering "What does Hated Neighbour  like in his garden then if it isn't foxes, cats, or plants?" Hated Neighbour likes drying washing in his garden, every day come rain or shine, ain't no rain hard enough, snow cold enough, to keep them from hanging washing in their garden.  Hated Neighbour also likes a ramshackle rabbit hutch, various old bits of garden tools and rubbish piled up and a shed with blue tarpaulin on it that flaps around annoying me.  That is what Hated Neighbour likes in his garden. Oh dear -  now I have gone 'off on one' and we were talking about the Bunny from Hell.


I have tried to keep Hebe and Spook out of his 'garden' with limited success.  They are both quite fascinated by the rabbit which is prised out of its hutch of a morning and left to its own devices running freely around the mud patch that it calls home - with the added interest of course of checking out whatever is on the washing line that day.  The cats sit on the wall psyching the rabbit out - Spook occasionally joining it on the mud flats, squeezing himself belly into the mud, eyes alight with excitement and performing that funny bottom wiggling thing cats do before they pounce on their prey.  Once I caught Hebe and Spook forming a pincer movement in a rare example of joint co-operation - I yelled before they could complete the manoeuvre.  Fed-up with constantly fretting as to whether the cats were bunny-bothering I finally left them to it. The Hated Neighbour can't be arsed to protect it against marauding foxes and I can't see my sweet innocent cats causing anything like that sort of damage.


And then one morning last autumn I looked out into my garden and there was fur everywhere - I went out to investigate and soft fur was floating in the pond, drifting across the borders and clumped on the patio. OHMIGOD! The blasted bunny's bitten the dust and some bloody animal has dragged its rabbit remains for one last final battle in my garden! I knew my sweet, innocent cats had been asleep in my bed all night but how could I prove it? I looked around for the carcass wondering how I could hide the evidence before anyone could frame them for the crime - but there was none, just the furballs.  I went up to the greenhouse and peered tentatively over the wall. There was the rabbit happily munching the two remaining grass stalks in the garden.  Later in the day, after I had accounted for all the possible neighbourhood cats who might have been fighting, I put it down to an inter-fox spat.


I finally gave up worrying about Hebe and Spook and the bunny on the day when, as I exited the greenhouse, two cats, tails fat with fear, flew over the watering cans blocking the trellis and sped down the garden to the safety of the kitchen, nearly knocking me over in the process.  Fed up with their silly stalking antics the Bunny from Hell had charged them!  I looked over the wall and Bunny was looking really rather pleased with itself.    The cats cowered in the kitchen for some hours, demanding chicken cat treats to ease their angst.  I'm rather hoping this means they won't mess with the bunny again. 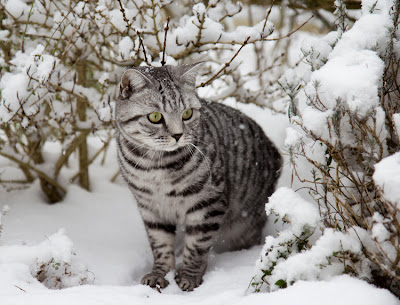 A short while ago I met Hated Neighbour's next-door neighbour, a nice lady with a sweet old cat who used to sit quietly in my garden until Spook, who is not good at sharing, saw her off - the cat that is, not the nice lady.  I mentioned my problems with the rabbit and she told me that she looked after it occasionally when Hated Neighbour was away and it was a cantankerous old bugger, quite violent and had bitten her on the ankle when she went to feed it! This is a bunny that can take care of itself!

Oh dear. I feel your pain regarding the hated neighbour and his attitude to outdoor space. I have similar problems. I used to get quite upset about the state of some neighbouring gardens. They are so awful it's painful to look at them. I've had to develop blinkers for my own sanity. I wish we could put all non gardeners in one part of the country and all us gardeners together in another and then we could live happily. I'm fine when I'm in the garden because I can't actually see the destruction and mess but then I have the dreadful trampoline to contend with, high pitched shrieking and dogs barking. I can feel a headache coming on just thinking about it.

I hadn't realised that we were "hated" neighbours (well more "selfish" than "hated") until I opened a letter delivered to us but meant for our neighbours. It was a rambling missive the sort that Mrs.S receives all too frequently from her distant relations. I read it with half an eye not really taking it in.

A few weeks earlier I had made a comment to my neighbour that the wood burning stove he had installed in his garage/summer-house blew smoke directly into my study window, & was there anything he could do about it.He very generously removed the burner. In the letter I was cast as a selfish person who should have more consideration for other people & not make trouble over such a petty matter.