Ladies who Launch - My Cool Allotment


First book launch of the year and it's the lovely Lia Leendertz's My Cool Allotment with photos by the handsome and debonair Mark Diacono.


After a harrowing few weeks of various disasters chez Sock I was glad to escape from Sock Towers and catch the train to London to meet the LazyTrollop for a couple of stiff G&Ts at the Jugged Hare (our favourite post RHS-London Halls-events pub) before travelling only slightly south of the river to the Garden Museum the venue for Lia and Mark's book launch.  I have a suspicion this is only my second social event of this year - the other also involving Lia during a thoroughly enjoyable evening at Lia and Juliet's Supper Club where we dined on beautifully cooked produce from Lia's allotment.

So Lia knows her allotment stuff pretty well and Mark is a dab hand at capturing the essence of a place with his camera. Working together they toured various interesting and inspirational allotments and community gardens in the UK and Europe and this is the result - a good partnership producing a great book which is already at the top of the gardening book charts!


After such a long hard winter the last few days have bought some warmth and sunshine and the chance for a jolly meet up with some old friends and make some new ones was well overdue.
And what a jolly evening it was - a real sense of Spring and love in the air - at least that was how I felt after partaking in several more glasses of wine.

And what could be better than a good laugh! Our first meeting with twitter friend Petra Hoyer Millar who laughed at all our jokes! What more could you ask for? I hope LazyTrollop didn't nick that copy of the book she's making off with...


And old friends Michelle Chapman, Rob Stacewicz, Anne Marie Powell are not impressed by the size of James Wong's carrot! 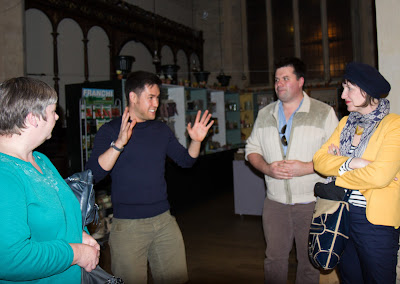 James certainly seemed to think it was Spring! What happened to ne'er cast a clout til May is out? 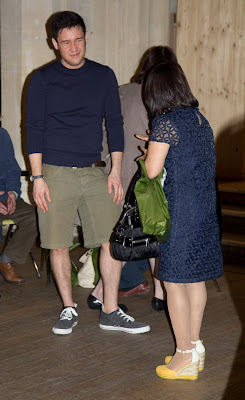 There were more lovely ladies, glamorous Laetitia Maklouf with daughter and the gorgeous Sarah Salway who Lazy Trollop and I voted our new crush


and I finally met Emma Townshend who was around in my earliest blogging days and was instrumental in creating a fun and interactive blogging community!


And there was cake - because there always must be cake! Lia had made it and very good it was too fittingly decorated with little marzipan carrots! I ate lots - even on top of all the G&Ts and wine. 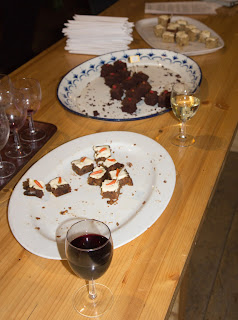 We do so enjoy a good book launch!  LazyTrollop, Ms. Reeley and I are setting ourselves up as 'Ladies who Launch' (a great name isn't it and we thought it up all by ourselves!). We are available to liven up any book launch as long as there are interesting people, free booze and food.  If we like your book as much as we like 'My Cool Allotment' that will be a bonus all round!
Posted by Arabella Sock at Wednesday, April 17, 2013 12 comments

..
Followers of Rough Devon Climate Farmer, Mark Diacono*  will have read his latest blog on the joys of Celeriac Brulée a dish which he has invented and which has caused some controversy on twitter (when I say 'controversy' I mean to a man/woman it was rubbished).  You may want to read about it here before continuing.

So with all this overdue interest in the humble brulée  this blog is my contribution to the defence of a much maligned dish. If I can agree on anything with Diacono it is that we should re-establish the art of Brulee.  I give you my new recipe for Porage Brulee! (or Porridge Brulée for those of you who don't speak Scottish).

The Three Bears and the Porridge Joke
It's a sunny morning in a big forest and the Bear family is just waking up. Baby Bear goes downstairs and sits in his small chair at the table. He looks into his small bowl. It is empty! "Who's been eating my porridge?" he squeaks. Daddy Bear arrives at the table and sits in his big chair. He looks into his big bowl. It is also empty! "Who's been eating my porridge?" he roars.

Mummy Bear puts her head through the serving hatch and shouts, "For God's sake, how many times do we have to go through this crap? I haven't made the porridge yet!"

And now for the recipe

First pour a random quantity of milk into a pan. Any old milk will do although personally I wouldn't use the Bedsock's lactose free stuff again as it tastes a bit goaty.


Scatter a handful of porridge oats into it - porage oats if you want to be a bit Scottish.
Go upstairs to the study and start reading your tweets
Forget the porage is on the stove
Become aware there is a slightly weird, sweet, caramelised smell wafting up the stairs along with some smoke.
Rush down to kitchen to find that the porridge has brulé 'ed (or burnt) onto one of the Bedsock's favourite pans.
Panic knowing that you will be in for a long lecture about "remembering stuff you have put on the stove and putting the timer on if you really are getting that dotty that you can't concentrate long enough to watch a pan of cooking porridge" etc..
Cool the pan and heave a huge sigh of relief when the bruléed porage casing lifts out of the pan in one piece creating a rather attractive piece of cuisine art of the kind seen in the best restaurants.
Realise that this is in fact all happily serendipitous and negates the need for the caramelisation with a blow torch - although if you are a boy or Mark Diacono you will probably want to play with this anyway.
Cook up some more porridge in the microwave (probably safest to use Ready Brek or something easy instead of this porage lark) and when cooked slop into the brulee casing
Pour on some creme
Dribble an interesting pattern of runny honey on the top.

I have to agree with Mark Diacono that whilst his "creative endeavours will remain largely unappreciated whilst he is alive" it is also highly probably they will never be appreciated. Don't let this put you off trying my Porage Brulée though it's a corker and quite good for your heart if you don't have the honey and cream on it.

* (as in Rough Devon Farmer not Climate if you know what I mean, although fair to say that the climate is probably pretty rough too)
Posted by Arabella Sock at Monday, April 08, 2013 6 comments