Of Dragons and Damsels... 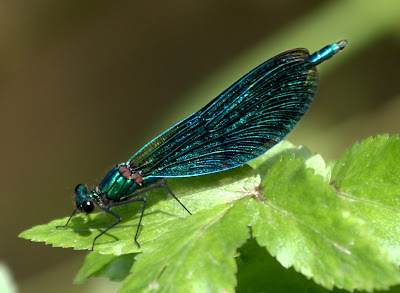 After capturing the irridescent beauty of this damselfly (a 'beautiful demoiselle' I believe) last year the Sock's decided that their new project, whilst out walking the Dorset and Devon countryside, would be to photograph dragonflies. (If you want to see the pictures as a slide show double click on any one - blogger sometimes annoyingly blurs the images so you should get better quality that way.) 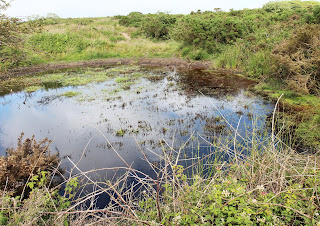 This slightly ordinary, boggy, shallow pond near the Hardy* monument in Dorset was alive with the magic of dragonflies flitting like fairies across the surface.  We waited patiently full of excitement until at last one by one they came to land on the foliage in front of us. 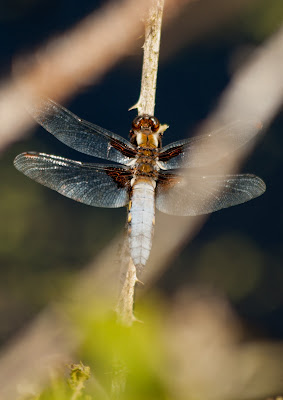 The ethereal wings of this little beauty contrast with the somewhat sturdy body. It's aptly named a 'broad-bodied chaser'.  He was happy to pose momentarily for us, returning time after time to show off his 'angles'.

The male a pale powder blue with yellow bands down its side. 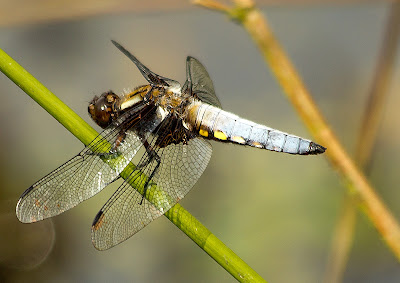 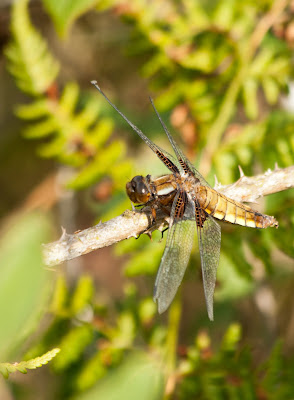 Another walk, this time on the River Yarty  just into the Dorset edge of Devon.  Dozens of banded demoiselles dancing across the water, whirling dervishly together until settling for seconds on a bankside stem. 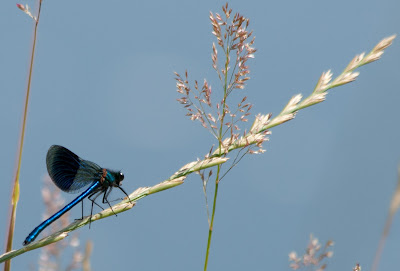 They moved so fast most photos ended up like this one, a quick flick of colour too fast to take a shape 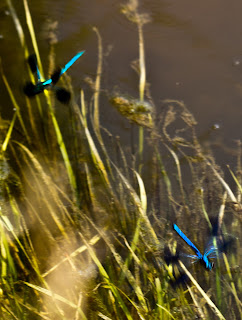 We waited patiently cameras trained on their favourite perches in the hope they would not just return but also show off their fabulous wing spread. 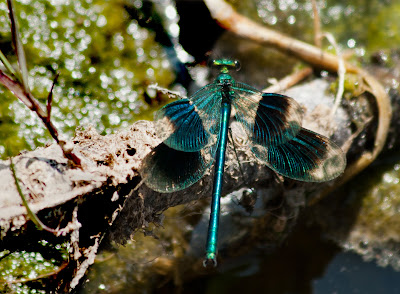 We were eventually rewarded with some fantastic pictures - 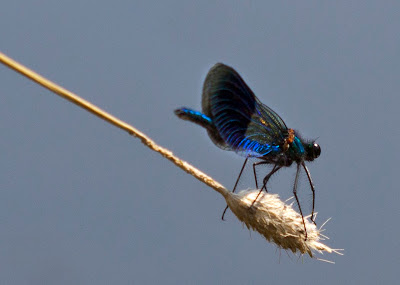 so exhilerating to eventually capture one at rest it quite literally made us breathless -  although our bovine audience were somewhat curious as to why we were lying in their dried out cowpats to achieve these pictures! 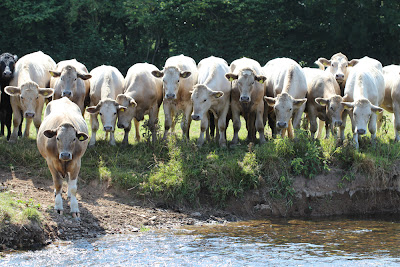 Earlier in the summer we visited the Dorset Wildlife Trust Centre near Dorchester and were amazed to see these weird creatures climbing the reeds out of their pond. 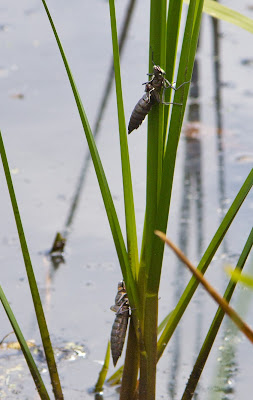 As they didn't seem to be moving I eventually gave one a prod to see if it was alive and to my dissapointment it felt like a plastic sculpture that someone had pinned there for a joke. Curious we later showed our picture to someone at the Kingscombe visitor centre who confirmed they were the exuvia that dragonfly nymphs leave behind.  They climb out of the water and the dragonfly will exit the 'casing' from the back.  You can just see the exit hole with strands of white hanging down in this picture. 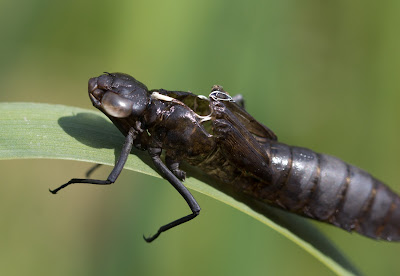 Isn't nature wonderful? I was taught quite a lot about these things as a child but I had never come across these before and still find this incredibly exciting.

Last picture is I think a 'common blue' we saw in May - its head looks like a little skull! 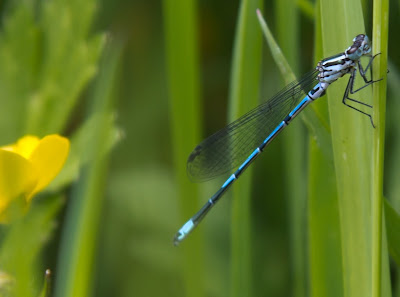 *The Hardy monument is dedicated to "Kiss me" Hardy - Nelson's best mate, not Thomas Hardy as I had always believed.  Who knew?

The Sock Guide to Conceptual Gardens 2013


..
I hope, dear Reader, that you understand the sacrifice I made to cover this year's Hampton Court Conceptual Gardens for your delectation.  It was hot, hot, hot!. I was hot, hot, hot! They were not, not not! No dear Reader - I can only say that for the most part they left me cold.

First up a garden with some flowers and a giant bottle of washing-up liquid. 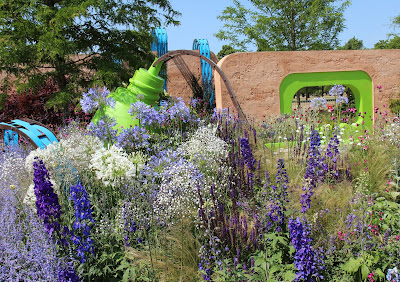 Yes! It's the Ecover garden.  Who knew?

As it turns out, if we're going to be pedantic about it, the Ecover garden wasn't actually a conceptual one. Not that you'd have known.

Next we have a pile of fridges placed on some silica cat litter - the expensive kind that my cats insist on having otherwise they wee on the soft furnishings. 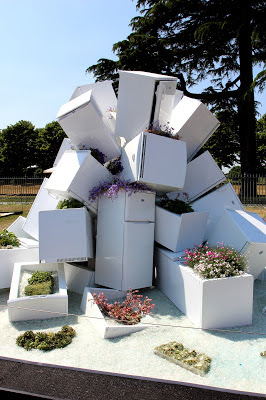 Last year a pile of televisions, this year fridges.  What household appliance will they do next year? I'm guessing ironing boards - they can have mine, I've seen enough of it. Actually they can have my iron and the ironing mountain too but they can provide their own cat grit.

Just as I was thinking this was all too jolly.. the conceptual gardens are supposed to be about death, ill-health and misery.. I came across this. Fantastic - the "We're all going to die" garden 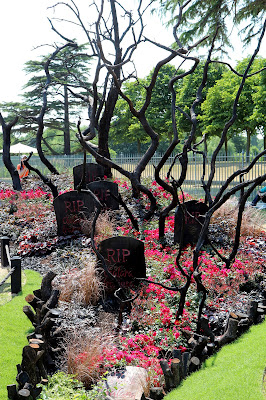 I rather enjoyed the  "Up the ladder to the roof, we can see heaven much better" garden.  The younger of you won't remember that Motown song (or even Motown). It was one of my teenage favourites. 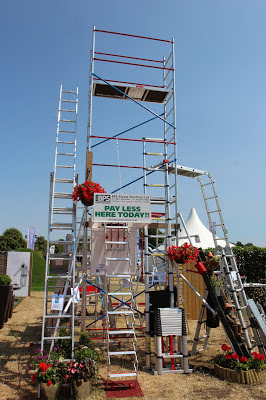 This wasn't conceptual I don't think but it was a mess. I never thought I'd see the day when I didn't like a Chris Beardshaw garden.. Tuesday was that day. 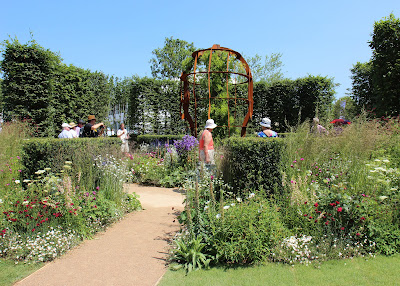 No idea what this was all about... death probably or some horrible disease. 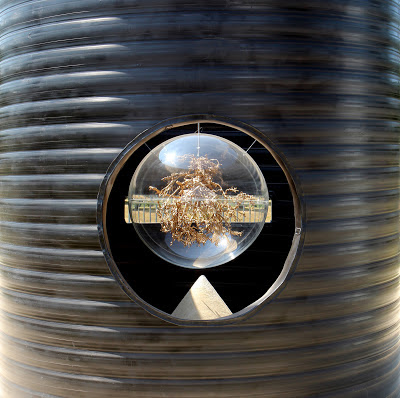 The Bedsock did overhear a woman say "that's the garden with gonorrhea in it" to her friend. I don't think it was this one though and wasn't enamoured of the idea of looking around to see which one it was.

This was called Claw. 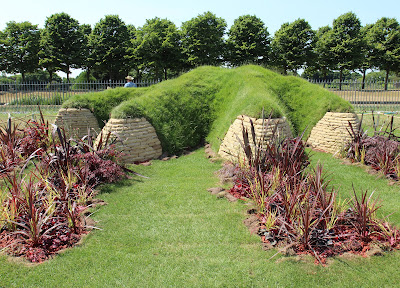 The space around it was entirely free of trolleyhaulers or indeed any viewers at all. Enuff said.

Another one about death. What's the matter with everyone? 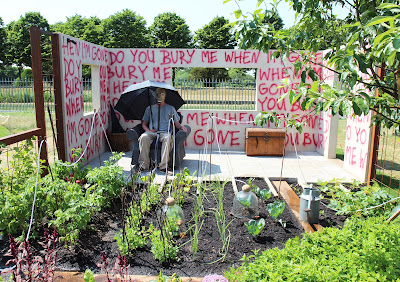 I'm wondering if it was something to do with green burials.  I recently asked OldmaSock what hymns she wanted sung at her funeral as she is getting on a bit now.  She said she couldn't care less because she'd be dead which, to be honest, I thought was a bit selfish as it leaves all the difficult decision-making to myself and BroSock.  When asked about her funeral in general she said whatever was cheapest - which was quite predictable.  I'm thinking cardboard box to the tune of "Up the Ladder to the Roof".

What is this? No, really what is it? Totally unremarkable. 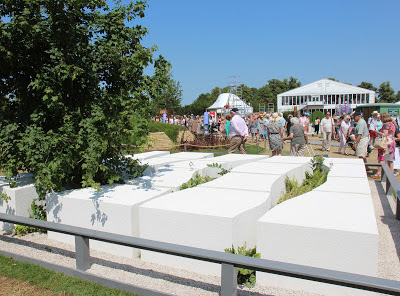 Next we come to Tony Smith's offering.  You may remember last year I thought I'd seen his concept before as he just recycled black box to green box.  Well this year he just cut down his Diamonds and Rust garden (from 2011) and gave us this concept of Iceland complete with vaguely smoking "volcano" instead of rust stack! 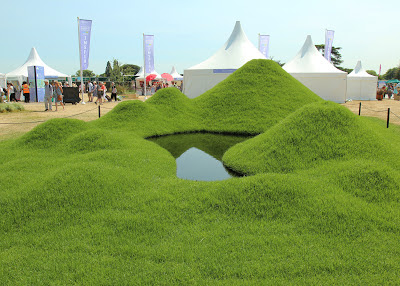 Now I don't know whether Tony has ever been to Iceland but I have and I can tell you there is a lot of land, a lot of ice but not a SINGLE blade of grass! That is the point of the place - there is almost no vegetation, just rocks, ice, mosses and purple lupins which are invasive and shouldn't be there. There are almost no trees and those there are are so stunted that an Icelandic joke is


"What do you do when you are lost in an Icelandic Forest?"

Or in the case of Chris Beardshaw stand on someone else's shoulders.