..
You will be wondering about the dynamics of the Sock, Trollop and Reeley 'Ladies who Launch' team.  I decide the itinerary and book everything, LazyTrollop drives (very well), listens (pretends to listen, very well) and utters occasional soothing noises (fairly well).  Helen takes care of the hour to hour organisation of the trip, thus absolving everyone else from any further decision-making - except maybe what to eat (and even then you have to be pretty quick to decide before Helen gives the waiter our order). Helen is the kind of person you really needed along in those days of yore when eating out in big groups, trying to split the bill fairly between twelve people arguing about who had what - Helen just tells you what to pay and that is that - sorted.

At the end of part one you found us tired and happy after our day with Harriet at Whichford Pottery retiring to a very nice Inn where Helen napped in her room whilst the Sock and Trollop knocked back a bottle of Prosecco in theirs before meeting up for dinner.

After a good night's kip and a fine breakfast (during which we agree that baked beans should never form part of a Full English) we are off on our travels again.  We are visiting the charming and gorgeous Petra Hoyer-Millar and her husband Luke at their country pile. It's a fabulous hot, sunny, day with just enough breeze to make it comfortable as the LazyTrollop drives us (very well) through the Oxfordshire countryside.  We are laughing at an extremely silly joke Helen is going to play, laughing so much that we are crying and I nearly have an asthma attack but still the LazyTrollop keeps us on the road with her calm driving.  Helen has been organising us with her map-reading skills but when we reach Petra's village the local directions are left to me.  It is therefore unsurprising that we end up driving around one of her unsuspecting neighbour's gardens before I realise that we should have used the gates 'WITHOUT' the pineapples on top!

When we finally find ourselves in the right place Petra greets us with cool drinks and a lovely table set-up on the shaded terrace. 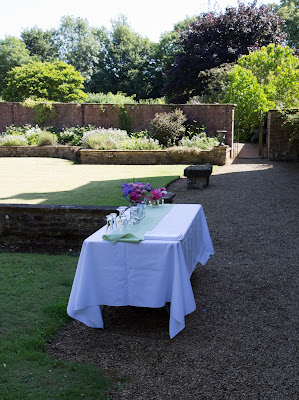 We feel like royalty - which is only right of course, as us 'Ladies who Launch' are indeed twitter royalty.  Our tour starts with the walled garden, Helen walking ahead and giving Luke the third degree on what they grow, why and future plans, whilst Petra, LazyTrollop and I wander behind, absorbing the warmth, the buzz of the bees and the gentle fluttering of hundreds of white butterflies wafting over the lavender.  Blissful. 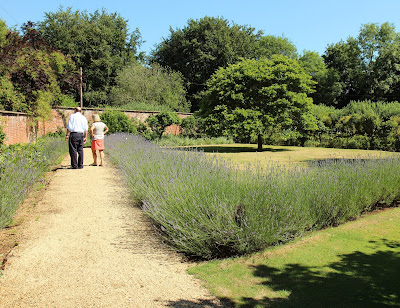 I am most envious of the fabulous Japanese Wineberry growing around a gateway - I have been meaning to buy one for years and after tasting these have finally done so. 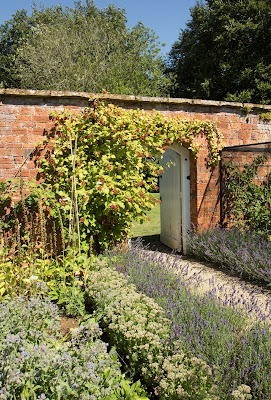 Petra and Luke grow various varieties of raspberries, loganberries, boysenberries and we try one of each. So interesting, some tart and bursting with flavour, some softer and sweeter, such a luxury to have fruit straight from the bush. A walled garden must be high on every gardener's dreamlist.. this one combines flowers, veg and even flowering veg, with the added ambience of ancient apple trees covered in lichen. 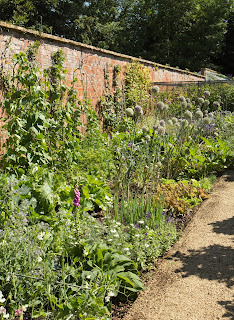 We complete our tour of the garden taking in the country vistas and the ha ha - they are only people I know who have their very own ha ha!.


Then lunch - the best sort of lunch.. Petra hopes we all like lots of basil! Fresh basil is my favourite although I have little success growing it myself.  And then a dessert to die for with more fresh raspberries on top! 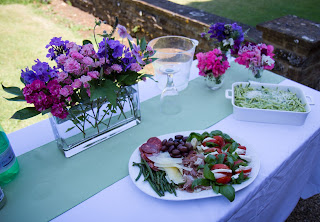 After my two glasses of white wine I would quite like to have curled up on one of the loungers for my siesta but at this point Helen says we mustn't outstay the incredibly generous welcome our hosts have given us and we set off  for our next stop - Rousham.


All I know about Rousham is that it is one of James Alexander Sinclair's favourite gardens, it has a big rill, and that Anne Wareham doesn't like it - although the latter goes without saying I suppose.
It's bloody hot and Rousham doesn't have a tea-room or cake - you would have thought this would have given it a mark or two on the Wareham Scale.  It's rather delightful really - just a ticket machine, some chickens running around the lawn, and a sign saying no children which is quite marvellous! 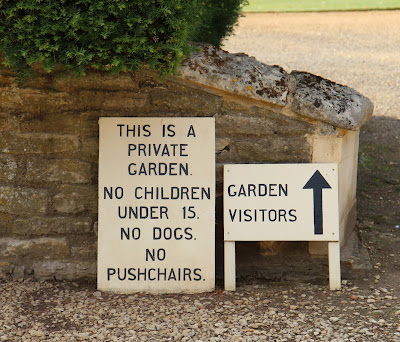 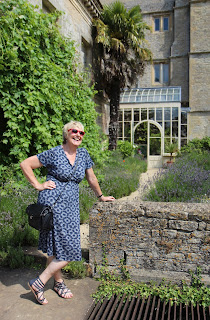 Another walled garden.. this with gates ready to be opened and reveal their secrets.. 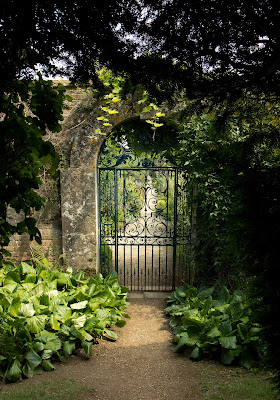 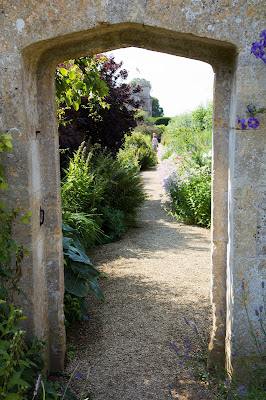 Ah.. yes.. the long, soft, hedges.  I was just thinking what a lovely, long, soft, hedge divided one of the walled gardens and how nice it would be to just lean into it a little and feel it curve gently into my spine... When the bloody hedge opened up and swallowed me, leaving only a Sock-shaped hole, and me on my back with my feet sticking out! I had to shout for Helen and LazyTrollop to haul me out! Luckily, they were too busy laughing at me to take a photo.  We managed to cover up most of the damage to the hedge but I was picking small leaves and twigs out of my hair, bra and knickers for the next day  One of the gardeners approached to find out what the fracas was about but we told him we were bezzie mates with JAS so everything was OK.

Hot, sticky, thirsty and covered in hedge we made our way out through the shady woods to a pool and cooled our tired feet. 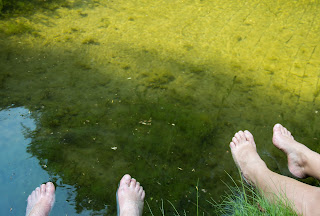 The rill was nearly as good as one of those foot massage baths that used to be popular in the 80s.

It was rather a good rill really. 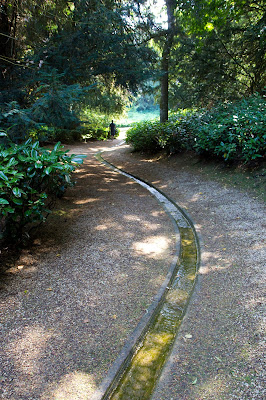 As we left we noticed they had made a small change to the sign.. 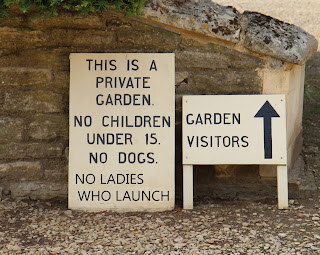 One of my favourite ongoing gardening 'jokes' is to giggle a lot every time I see a Ha Ha ;)

It was raining when I went to Petra's last year and the garden was gorgeous despite the rain. She and Luke are very generous hosts :)

Arne Maynard also likes Rousham rather a lot - perhaps it's a designery thang? I've yet to visit and make up my own mind...

We dropped in on Petra and Luke at the last minute when the garden was open for the NGS. She gave us a tour of the garden. I really liked it, and she was great fun. She had some lovely species roses in the shade of some variegated sycamores.

Looks like a rollicking good time was had by all!

You were very close to here: I thought that there was a scent of crushed roses, warm sponge and Chanel No5 in the Northamptonshire air.
Next time I wish to be visited, please.

Hi VP, I didn't think Rousham was particularly 'designed' except for the marvellous rill. Other than that it was just all relaxing and pleasant and not too taxing which was totally gratifying.

James - obviously we did consider coming and peering over your wall to see if you were in (and having a jolly good snoop around if you weren't). I seem to think Petra said it was a difficult place for peering over walls and we wouldn't see much so clearly she has tried this in the past. Of course we will visit you next year - I'll just get the Sock Diary out...

Have only just cottoned on to this lovely write up of your tour!! So so lovely to have you all here and I hope you all come again soon! Must ensure we put pineapples on the other gate too, just for the fun of it...