What the Summer Gods gave with one hand - warmth, sunshine, a greenhouse resplendent with the tastiest of tomatoes... they took away with the other, dumping the detritus of life on the Socks long, long after I'd reached my breaking point.  Having a beloved cat and a sister-in-law with terminal prognosis and the rest of my small group of relatives in varying states of dementia or depression hasn't helped but it isn't these that cause the problem.  I can cope with the big things by going into a state of denial. The fact that there is nothing can be done but get on with it, almost eases the pain.  No, it is the vile, disgusting, self-interest of those who pose as normal, pleasant, people that smothers me, that obsesses me, that I can't get out of my head and is all I really think about.. That wakes me in the night with my heartbeat too huge to be contained.. and whilst it should be minor in the scale of bad things, it rips the lid off the Pandora's box of bitterness and self-pity for everything that ever went wrong, for each hurt I ever suffered - and I feel the pain of them over and over again. Pandora's box is locked for good reason.

I try a technique to distract me from the bad thoughts,  name as many American States as I can.. starting with the As.. Alabama, Arkansas, Arizona....  there should be fifty I can't get to more than 34. This in turn obsesses me.. listing them on my iPad at three in the morning to see which I have missed, which I have counted twice.. 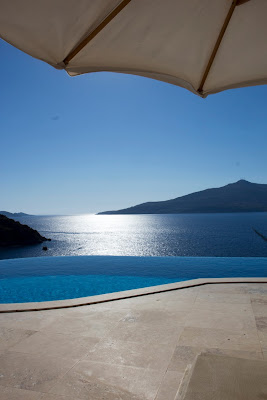 We book a week in Turkey to stave off my inevitable breakdown.  We should have been touring the winelands of California, Yosemite Park and Vegas but that was all cancelled long ago. I won't leave Spook for too long even though at present he is a happy, bouncy, plump ball of wickedness despite losing his whiskers to the chemo treatments over the summer.

The villa is one we stayed at two years ago, we wouldn't normally return somewhere when there is the rest of the world to explore but this is perfect - an infinity pool looking out to the warm, clear sea below, the sunsets and the stars. I am set up to do nothing but read, rest and relax for a week.  I love to swim.. I float naked in the privacy of our pool watching the stars, the cool cocooning water soothing my body, stealing away the stress. 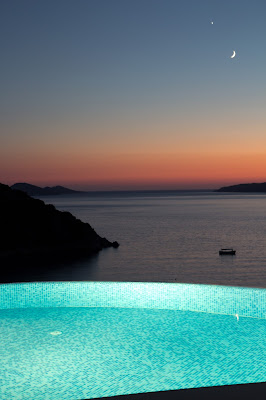 Our  main enjoyment over the English summer has been finding and photographing dragonflies.  As I drift, lazily in the pool one morning I notice one little Turkish beauty on a branch tip of the pine tree by the edge. Then another and another as I realise that each branch has attracted a visiting red-veined darter.. each posing and posturing showing their best angles to an awaiting photographer. There are some good pictures although blogger invariably blurs them - clic to enlarge 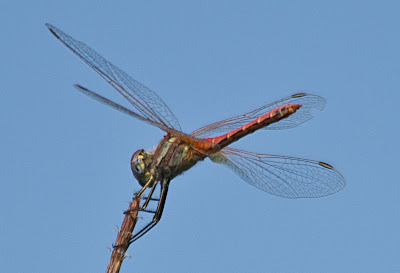 When we can be tempted from the villa it is for a short drive to the fabulous Patara bay.. twelve kilometres of unspoilt, silver sand. 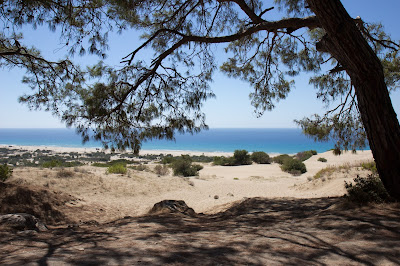 Behind the bay lie the ruins of Patara an extraordinary and totally understated archaeological find.  What was once a thriving Lycian port  lay covered by sand and marshes until in the 1990s a gradual excavation started.  In the dunes lie the ruins of  a Roman lighthouse almost 2000 years old, the skeleton of the lighthouse keeper found crushed in the ruins a possible victim of a tsunami believed to have devastated the town.  Despite the interest and beauty of the place it is more or less deserted with most people heading straight to the beach area a few hundred metres away.  This leaves the ruins to us and a host of wildlife guarding the temples like the reincarnated souls of the worshipped Gods. 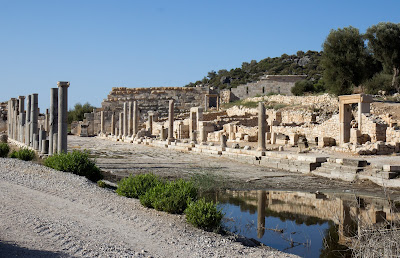 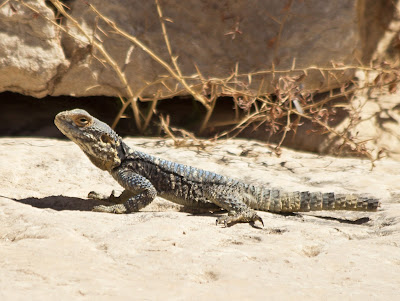 An abundance of red-veined darters - a shaft of sunlight through the dragonfly's wings staining the stone with colour.  The male the brightest of blood reds 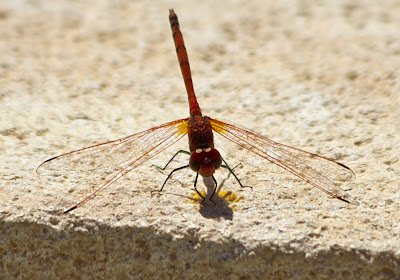 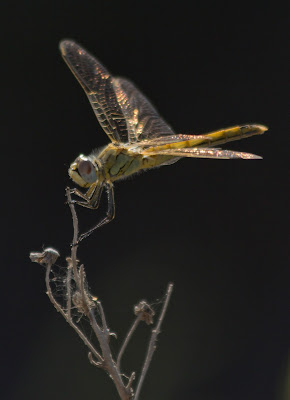 and luminescent blue-tailed damselflies eager to steal the scene. 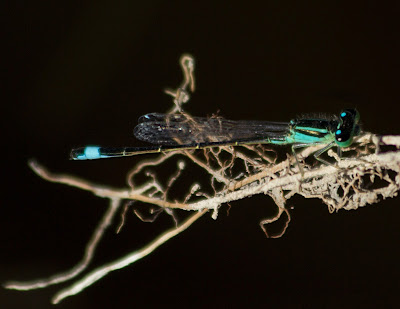 And most extraordinarily a Turkish kingfisher perched on a broken column turns it's dagger-beaked profile to glare at us, a gleaming vision of intense, iridescent blues excelling even those of the azure Lycian sea nearby.  Too late to photograph but the image is imprinted forever in our memories.

If the kingfisher is Apollo jealously guarding his temple then these oriental hornets must be the incarnation of Mars, God of war! We didn't even notice these two inch long predators were eating a dead furry thing until the photograph was enlarged! 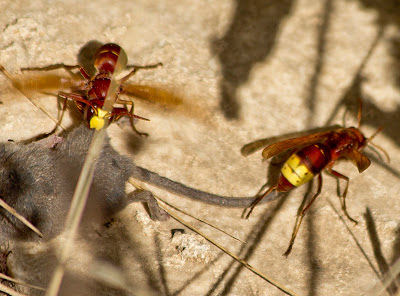 We swim in the warm waves at Patara letting the sea pummel our problems away. We visit the Hammam where last time a doe-eyed, long-lashed Turkish boy scrubbed us down and soaped us.  This time I am washed down by a man who looks more like Craig Charles from Red Dwarf/Corrie - he grunts a bit and enjoys my scream when he chucks a bucket of icy water over me.  Nevertheless it makes me feel good, cleansed of worries, relaxed.  We enjoy massages in a little cave by the sea, lulled by the sound of waves lapping the rocks below and the practiced hands of the masseuse, soft, smooth, stroking motions and fragrant oils that soothe away our aches and anxieties.  We eat, we sleep, we are at peace.

On the flight home with Monarch Airlines they have run out of gin.

One day home and I am obsessing again.  By this time I have discovered the missing States, Idaho, West Virginia, Utah.. I allow myself Monterey as I clearly meant Montana.  The new distraction technique is to name a song or film containing the name of a U.S. State

Achingly beautiful pictures. And agonisingly difficult to read without feeling sad for you.

Extraordinary that you do the American states. I do that too but usually come adrift in the Mid-West.

Try counting American Presidents or Prime Ministers (ours) backwards from Cameron to Walpole or Dubbya to Washington That helps too. It doesn't get you to sleep, but distracts from the small hours brain-racing.

That lizard looks like an agama of some sort.

Thank you Nigel.. really I want to be writing joyful stuff - I like my blog to be a shiny happy place. But this year I find myself almost unable to write and when I do it's full of angst. You don't need to feel sad for me though as I feel quite sorry enough for myself! Hey-ho.. all part of life's rich tapestry.

THank you for the lizard name. I looked up Turkish agamas and it is indeed one of these. It looks like it has shed the end of its tail (as little lizards do).

I'm not sure that my counting Presidents and Prime Ministers backwards will take up enough time in my case! Also when I get to Blair and Thatcher it will be enough to give me nightmares.

I'm glad that you found a haven, if only for a short time. Hold onto the peace that you found there for as long as you can. Big hugs for all the rest.

The agonising spiral of losing those you hold dear... the powerlessness and futility... I still feel slightly adrift at the loss of my Dad last year (and all that led up to it). We are off to the med soon ourselves to scatter his ashes in his favourite spot, so the grief is not far from the surface again at the minute. There are jokes about flying with my dad in the overhead locker that I think he would like, but there is a sob not far from the giggle in my head when I think this.
Thinking of you anyway. Stay strong. xxx

Thanks Hilwards. It is strange how grief for a lost parent can suddenly surface without warning. A smell, a view a sound can just trigger the memory of them so intricately woven into your own life. A different sort of grief to that I have experienced when my beautiful cats have died which has left me devastated. The death of my father was easier to deal with on one level, he was not part of my day-to-day life which went on as normal, but the loss was much more profound. I still laugh at things I do which would have irritated Pa Sock and his description of myself and Bro Sock as "gibbering idiots".

We lost our two year old cat to some fool fast driver on our country lane just two months after we lost my Dad. A different grief entirely, but it shattered apart the fragile world that was just beginning to take shape again. As you say, almost harder on one level as she was so much part of everyday life. At least we didn't see that one coming - and neither did she. Much harder watching my Dad fighting and losing for three long years, though I was still full of shards of hope, for a miracle that never did come. But they do come for some, I really hope that a miracle comes for your loved ones.

Some lovely photos there. I'm glad you got away to somewhere. I've never been to turkey, but looking at your villa I guess I should rectify that.

Not much I can say on the spook front, apart from to send you our love.
I'm recording a version of "Londonderry Air" to upload. It's a piece that makes everyone in our family cry even when we are happy, and features in every funeral in the family (Irish roots). So that'll be cheery for you to listen to. I'll keep you posted when it goes up..... :)

This is such beautiful writing, and beautiful stunning photographs. I'm sorry too that you are going through such a hard time. Yes, it's life but I think we're all allowed to say it sucks sometimes!

PianoLearner - I can't say I know much about Turkey having visited one tourist spot and a few sights. For me the real treat was swimming in a warm, clear sea with enough waves to make it fun. I should have been a mermaid..

Sarah - coming from you that is a huge compliment. Sadly the last couple of years seem to have got increasingly difficult and it becomes hard to write more life affirming stuff. If all I can do is angsty posts then I will have to close the blog so I can remember it as a happy, funny place.

That would indeed be sad. I have a niece with a cancerous brain tumour about to be removed yet again, and very ill dear friends, it is blogs like yours that make the day sunnier and take my mind off life's worst woes but of course bloggers have woes as well. I hope your break refreshes you and makes you feel stronger.