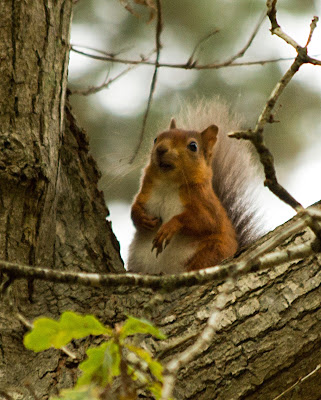 An urge to get out and see the evanescent colours of autumn took us to Brownsea Island  on the last day of general opening for the season (November 3rd).  We took the little yellow passenger ferry from the Sandbanks side of Poole Harbour to the island on the first day of sharp, wintery, cold, the wind whipping up waves, bouncing the boat away from the open seas into the calm of the huge natural harbour.  A ten minute journey moving from the materialistic modern world of prime estate that is Sandbanks, through a time warp, onto an enchanted island where time has stood still no development has marred its charm and beauty, no noisy cars shatter its peace . 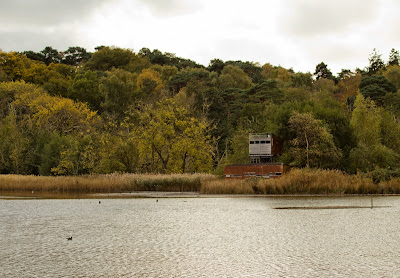 We emerged from the tunnel of tea rooms and National Trust Gift shop into an enchanting Narnia. First wandering out to the nature reserve on the north of the island (owned by Dorset Wildlife Trust) to spend a while bird watching from the hides.  Avocets, and a flock of bar-tailed godwits were settled around the sandbanks occasionally whooshing up into a huge aerial display whilst a few egrets meandered around closer to the shore.  We could have spent the day here mesmerized but with only a few hours before the final ferry to the mainland we made our way back to the centre of the island to see the main attraction.  Red squirrels! 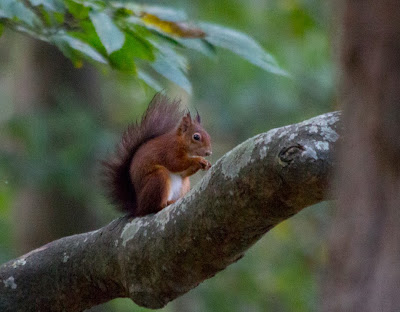 Brownsea Island is one of the only places in the British Isles that boasts a red squirrel population. When I was a child I would often see them in our local park before the ubiquitous grey squirrels took over.  Since then I have just seen one red squirrel in the Lake District some years ago so a glimpse of them again would be a real treat and a decent photograph would be the icing on the cake. 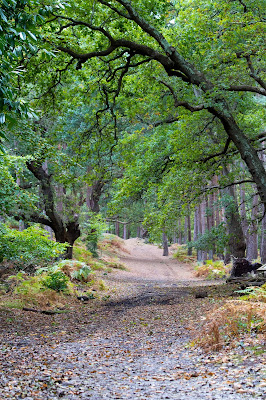 We had read that the squirrels could be quite shy and we were not guaranteed a sighting.  The woods were quiet, just the crunching of leaves beneath our feet, until we caught a different rustling and froze!  A red squirrel leaping and dancing beneath the trees, and then another and another, our eyes adjusting to picking out their more vibrant colouring from amongst the fallen, fading autumn leaves.  They seemed little bothered by our presence and kept just one curious, beady eye on us being more pre-occupied with their foraging. 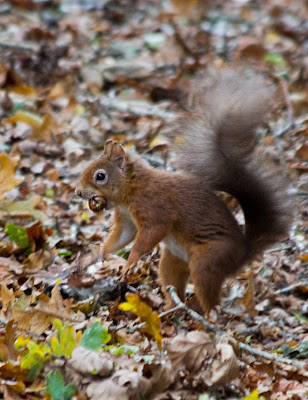 The low light levels beneath the trees and the rush to take pictures before we lost the shot (reminds self to set the camera at the ready in ADVANCE of spotting the wildlife) meant that many of the shots lack clarity or rather grainy.  In some ways I don't think this matters - people 'instagram' high def photos in order to achieve the same effect. 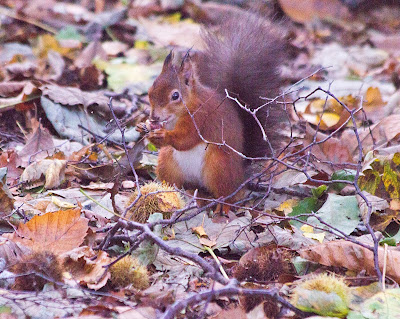 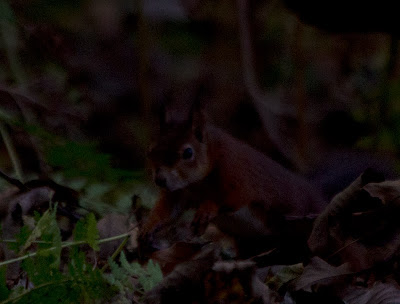 but a quick autocorrect in Photoshop and a squirrel leapt out at me! 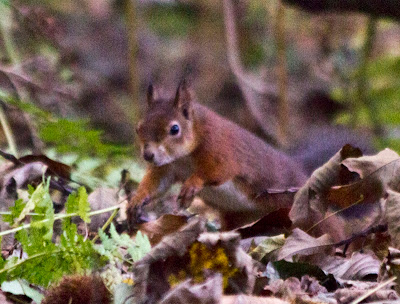 Luckily I hadn't deleted the dark pictures on the camera, as I continued photoshopping a series of fascinating pictures of a squirrel collecting nuts for its winter larder appeared. 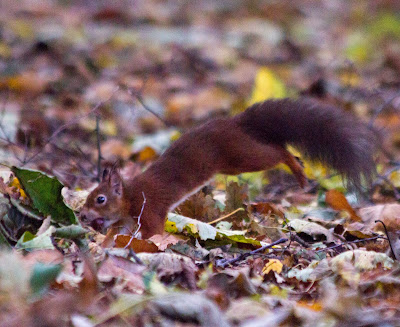 All too soon we had to leave having only seen a tiny amount of the island.  We will of course return soon to explore the rest. 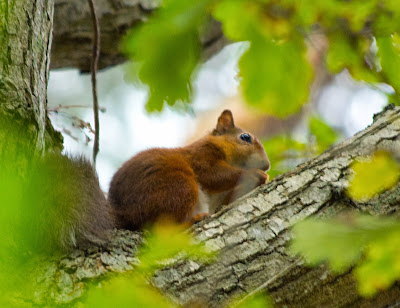 I'm sure this has been alluded to before but since you've let the cat of the bag may I recommend the grey to reddish brown conversion filter in Photoshop. Works a treat every time & saves one from any possibility of sea-sickness.

We've wanted to visit Brownsea for years now but have never managed it. Does look lovely. Red squirrels are a real delight. We couldn't believe our luck when we saw them up in Scotland and could have spent all afternoon watching them. You got much better shots than us. They are nifty little creatures.

I used to live in Dorset just North of Poole. But never got to Brownsea, at that age I was more interested with the bikinis on the beaches. How times have changed. Will try to get down there soon.

Your shots cleared up beautifully, what lovely creatures, and a wonderful day out.