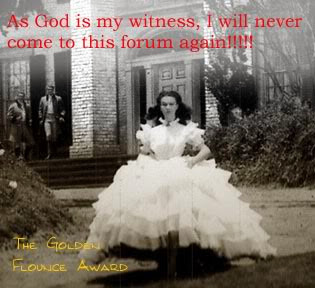 We are just coming up to the annual Garden Media Guild Awards, a jolly beanfeast for the usual suspects great and the good of the gardening world.  I don't normally go to this as I would be sure to get drunk and fall under the table which is all very well for the young things like Anne-Marie Powell but not so pretty when you get to my age! We have already been warned the event will be a seething hotbed of gossip and jealousy.  Unfortunately, the undercurrents of unrest over Alan Titchmarsh being dumped for Monty Don at Chelsea, have been superseded by this year's Golden Flounce Award.  Yes! The winner is the Donster himself, who despite his lack of familiarity or patience with social media gave an excellent performance that would have done credit to any messageboard member!

You are asking me what was so special about this particular flounce? In order to explain to the uninitiated I need to inform you about the different type of flounces.

The Poor Me Flounce

It starts when someone has been a bit nasty or critical of you on the board.  You take umbrage and in order to make them look bad you post a "Goodbye cruel messageboard/twitterworld" thread saying how hurt you are but that if people don't like your postings then perhaps the best thing to do is leave. Note the use of the word 'perhaps'. Clearly there is no intention of really leaving but a pretty strong guarantee that all your friends will turn up cooing and aahing over you, telling you how much they enjoy your posts, how you shouldn't let the nasty bullies get to you.. and so on.  When you get to say 25 replies begging you to stay, you proclaim how wonderful you, everyone else, the messageboard is and graciously return to posting, leaving the critic looking small and petty.  Warning: this may backfire if you don't have any friends.

The Full Flounce with Frills on

This is the most dramatic flounce and relies on the fact that you were bored with the messageboard and were going to leave anyway.  You engage with people quite a bit in the preceding weeks attracting plenty of attention to yourself and then you simply disappear! For particular effect you can even do it mid-sentence.  If you are reasonably popular posters will start to notice by that evening and there will be a rumble of "Where's Hankthetank?" on the chat threads.  By the next day they will be panicking and within two days a dedicated thread actually called "Where's Hankthetank?" will be up and running with people variously wringing their hands and weeping and wailing, the braver of them getting to the nub of the matter by suggesting that as the poster was pretty old it was possible they might actually have carked it. Cue more sobbing and snivelling with no-one bothering to google the member's name to find they are actually happily posting away on another messageboard.

This is for the recidivist flouncer forever taking offence - usually down to the lack of attention they are receiving because the reality is they are rather dull.  The Boomerang will flounce several times a year leaving a slight whiff of peevishness in their wake.  None of the other messageboarders will really care - some will try and jump on the Boomerang's bandwagon by proclaiming their support, the rest will have opened a book betting on number of hours until the Boomerang's return.

This is the one where you discreetly leave 'the room' and sit for hours watching your screen hoping that someone will eventually notice you have not been around for a while. [This can be very hurtful - I speak from experience.] Hopefully, at worst, someone will DM or PM you to ensure you are OK but better still a little flurry of messages will appear being concerned.  At this point you turn up again smiling bravely saying things have been tough and you just needed a break.

The Golden Flounce contains elements of all the other flounces in particular the Boomerang.

Don't try this at home readers, if you are not already famous with a lot of twitter followers it just won't work!

First you establish yourself as a sensitive soul with strong opinions but a certain vulnerability and reclusiveness.

Then you piss off the Badger Brigade by not making a strong enough statement against culling and contradicting an earlier tweet you made which someone has tediously dug up from months ago.

Then after a couple of 'brutal' tweets from a badger lover suggesting you should be ashamed of yourself , you scarper,  aiming a 'poor me' "Goodbye cruel twitter world" tweet at your followers leaving twitterworld awash with astonishment, guilt, recriminations, ridiculous accusations and confusion. 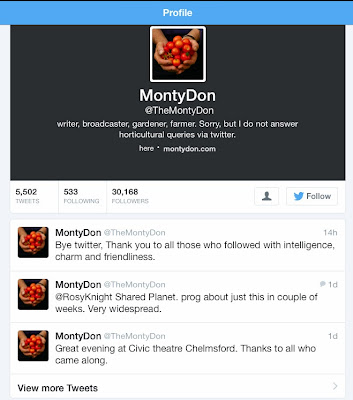 (Dear departed Diana would have been a Past Master at this.) If you are lucky the tabloids will pick up your story with the labels "hate campaign" and "twitter trolls" and it all keeps you in the public eye at an otherwise fallow time of year.

Oooh.. well I never, as I write it looks like Monty may not have left twitter after all - let's hope we were just on a break!

*The top Golden Flounce image is one of similar ones that circulates the net and is awarded in various places so for this reason I can't credit it.
Posted by Arabella Sock at Tuesday, November 26, 2013

Perceptively honest &
honestly perceptive.
As only one who has been there done that & worn the tee-shirt could be.

So true Daubenton! What fascinates me about the messageboard behavioural stuff is that I've seen the same scenarios (which were new to me 10 years ago) replayed time and time again. Same accusations of cliques, same flouncing techniques etc. I stay 'safe' on twitter now but I still read a few favourite messageboards and all that changes is the 'dominant clique' and posters names.

Great post. Very funny, and spot on with the types. I feel a bit sorry for Monty. I don't think he can win on twitter. But then contrary to what some people beleive I don't think twitter is meant to be a competition. It's so easy to get drawn into things that you might be happy to discuss in an adult conversation/debate/argument in real life, but that are best avoided on twitter. I have had to delete a few half written tweets, it is never worth engaging.
When I'm famous I'll have to hire a social media manager (or use the new google thing they just announced) to feed my followers and filter out the bad stuff. Fancy a job?

P.S I didn't realize you could take down your feed so it said (this user doesn't exist) but reactivate t with all your orig followers, but it seems you can...

So easy to look a total twerp, or something stronger, if you mis-judge. That is why I love everyone!

Oh Lord, I'm guilty of the passive flounce without realising it!

Erudite, entertaining and terrifyingly honest hope they make strictly come flouncing to while away the Winter friday evenings you would be perfect judge

Thanks for your comments. i agree Pianolearner but Monty doesn't make things easy for himself.

Ms.B. As you love 'everybody' I now feel undervalued.. Boohoo! This is what happens when you sit on the fence!

VP.. It happens to us all. Around the country there are millions sitting in front of their computer screens with a tear rolling down their cheek. They have silently flounced and no on has noticed...

However I did see a very funny 'Failed' flounce on an MB recently. There were spats going on all over the show and people flouncing in droves. One poster had started a thread saying "I'm disgusted by these goings ons in this place that I love" (always affirm yr deep love of the place you are flouncing from .. It adds more dramatic depth). As the thread continued with various beggings to stay etc. some poor poster decided she also needed some attention so would flounce, only she mistimed her leaving statement and someone else posted immediately after taking the thread onto a new page! Nobody noticed her post as they were all too busy cooing over original flouncer. After a couple of hours she had to unflounce just so she could repost a better timed flounce statement!!! I laughed a lot at that one.

Mark, thank you - I totally agree!