RHS Chelsea - The View from the Couch


This year's view of Chelsea is from my couch.. where I lie in a state of fragile beauty, propped up by white silk pillows edged with Swiss lace and plumped with the finest eider feathers, a soft cashmere blanket is draped over my tired limbs.  I should have been at Press Day, but my new dress and beads hang unworn in the wardrobe waiting in the hope of a Chelsea outing next year.  I am an invalid but I am not invalid because I am the Sock,  and I will not let my readers down when I know they are waiting in eager anticipation of my Chelsea musings.

What is the BBC thinking of with this 'celeb plus mother' combo? Bad enough that we should endure the ramblings of some 'D' list celebrity whose horticultural expertise is based on a pot plant they once bought from Marks and Spencer..  but then they have their mother in tow to be interviewed! If the BBC really want some maternal meanderings I'll take OldmaSock along next year.. she's always good for a laugh even though she's more than a tad demented now.  I can just imagine her scuttling around Chelsea with me.. "Oooh Arabella - that's expensive you are not buying that are you?" (OldmaSock is a miser, I mean REALLY), "Oooh Arabella, we'll just have a drink of water this wine you've been plying me with is too expensive", "Ooh Arabella - does your hair need brushing, it's a bit dry isn't it?!", "Is there any more of that nice wine, Arabella?!" "Where ARE we?", "These plants are very expensive aren't they Arabella", "Do you want to borrow my hairbrush?".  I would have to keep her on leading reins or she'd be off into the crowd searching out freebies and nicking cuttings from the show gardens.

[As an aside.. some of you may remember in the last adventure of OldmaSock I wrote of her obsession about disposing of her garden rubbish and how she got a visit from the council for fly-tipping it on a nearby bit of parkland.  She got rid of them by saying she was a 'poor eighty six year old lady' - the mad bit they could judge for themselves.  After being thoroughly told off by my brother and self for the flytipping, she was made to promise to never to do it again. Recently, I asked her what she was doing with her waste now - Oldmasock cheerfully replied that she had been loading it into her trolley and trundling it the kilometre or so to the tip!  I allayed my anxiety about what her neighbours must think and whether she was a danger to passing cars, by refusing to believe this story - OldmaSock makes a lot of stuff up in order to divert attention from any plans she thinks we might have to put her in a home. When my brother last visited and she demanded he take a load of garden waste to the dump, he asked  the men working there if they ever noticed a little old lady pushing a trolley of garden rubbish. "All the time" they said "she's a regular!"

What can you do? I just feel envious that OldmaSock has more energy than me.

Where were we? Oh yes Chelsea.  I had half a mind to just turn off the TV and twitter and spend the week in a sea of self-pity, alcohol and too many chocolates.  But my twitter friends wouldn't let me, deluging my time-line with details, selfies, opinions, photos and sending me behind the scenes gossip.  Twitter  has been better than the TV as you feel caught up in the fun and excitement of it all!  The BBC coverage has been too bitty and my attention wanders, too many presenters, not enough time spent in any one place, it is all a bit dizzyfying!  I would lose one of Sophie Raworth or Nicky Chapman - it doesn't need two presenters who are not horticulturally trained and I would stick with the former as she is less irritating.  Lose Monty Don - he just isn't a people person and it feels uncomfortable to watch someone looking uncomfortable being there.  Joe Swift has benefited from emerging out of Alan Titchmarsh's shadow after being the fall guy for so many Chelseas, his Gold winning garden last year has gained him enough gravitas to become the lead presenter. There is a time and a place for Christine Walkden - not my time or place but she has a huge following and goes out of her way to be polite and helpful to people on twitter (some other Gardening media types should take note!). I would lose Rachel de Thame who I just can't warm to and give her slot to AnnMarie Powell who can never be accused of being bland.  Andy Sturgeon, Chris Beardshaw and Tony Buckland all bring something different to the mix but nevertheless there are just too many,  although this may, in some part, be due to me watching too much coverage.


I enjoyed hearing James Alexander Sinclair, explain the new judging process - I'm not convinced that giving the Designers too much information to bicker about is necessarily a wise decision, even if it is a fair one! Also, it pleases me that I am on hugging terms with someone who is posh enough to be allowed near the Queen and can wear such a well designed suit! Chelsea wouldn't be Chelsea without Carol Klein looking fabulous as ever in her party pink dress!  At the other end of the scale Monty looked like he had bought a new suit, same as the old suit!


The picture at the top of this post is of my friends Heucheraholics stand in the Marquee. They got silver-gilt to add to their collection, able to relax a bit now after the pinnacle of last year's Gold.  I would have loved to have seen this in the reality - the way they have captured the warhorse's leap from the colours of scorched earth and devastation into the summery meadows of the longed for homeland tells a moving story.  The other garden I felt I really missed out on not seeing in the flesh is the Cloudy Bay one - pictures of the planting look absolutely divine but I still haven't got a sense of it in its entirety.  Nevertheless Cloudy Bay will be getting my People's Vote!


And my Chelsea wouldn't be complete without a Matthew Wilson (LandscapeMan) encounter.. lying on my couch I felt a touch of melancholy when I knew I had missed him.. but do you know what dear reader? He missed me too... 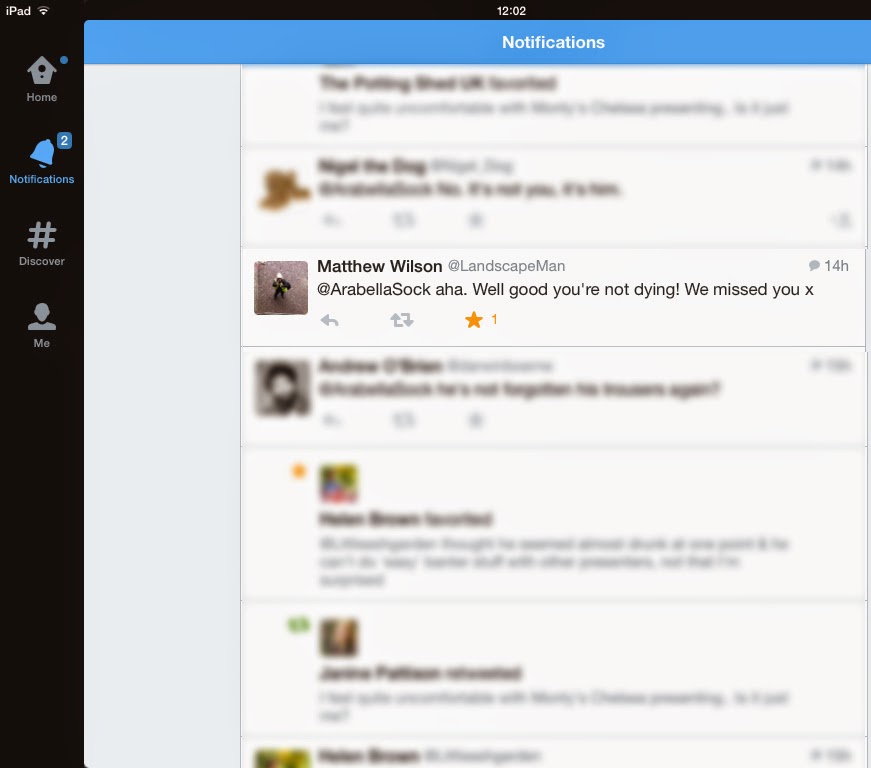 Behind the Scenes at RHS Chelsea

And what is the lovely AnnMarie Powell up to today?