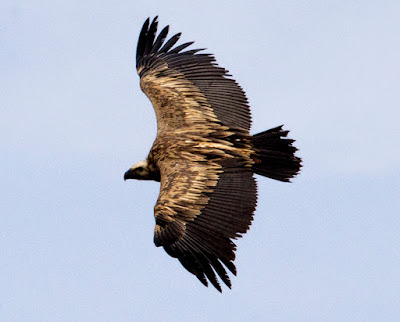 I thought I had better post a quick blog as I had the sudden realisation that if I got run over by a bus, not only would I be worrying that I hadn't worn a decent pair of knickers but my very last blog post would have been a depressing and unedifying one! And we can't have that, so today, dear reader, I am going to tell you about the uplifting experience of photographing vultures in Crete earlier this year.

Early May and we were staying in a fabulous villa on the North Western tip of Crete.  The holiday plan was mainly relaxing in the sun, (warm enough for sunbathing but not quite hot enough to stop our chic pool at the villa from still being just a little bit nippy!), swimming in the sea and photographing wildlife.    A drive along the Balos peninsula, famed migratory route from Africa, had produced little wildlife except elusive crested larks, a distant view of a 'black-eared wheatear' and some rather pretty grasshoppers. 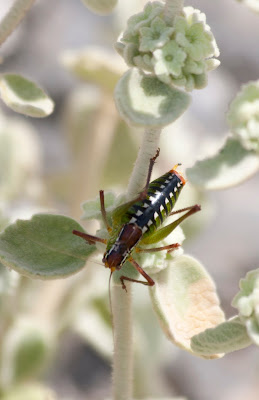 We were feeling a little short changed on the birding photo front, I had promised the Bedsock eagles but the best bird we had photo'ed so far was a Sardinian Warbler.  So, nearing the end of our holiday, we had one last chance to find something more exciting to test out our new 600mm Sigma telephoto lens.  Tripod, cameras and lenses packed into the Suzuki Jimny -(a hire car 4x4 that judging by the scratches already looked like it had been driven through a great deal of off-road undergrowth and which also squealed somewhat alarmingly when cornering) we set off  along the 18km Rodopos peninsula on an extremely 'unmade' road track to investigate the ruins of the  Diktynna Sanctuary, dedicated to the daughter of Zeus, at the tip. I'm always a little trepidatious about these off-piste jaunts.. having ME means I can't walk very far and the possibility of the jeep breaking down miles from 'civilization', with no mobile signal, and being left in the car on my own at the mercy of any mad axeman lurking in the wilds whilst the Bedsock staggered 18km to fetch help, was a slightly worrying prospect.  But hey-ho, you can't worry about everything - although I do have a jolly good try!

The track seemed never ending.  One of those where you think the end will be just around the next corner - but round the next corner is just another few corners of wilderness.  There were a substantial amount of goats around to keep us company!  These were having a bit of a face off! 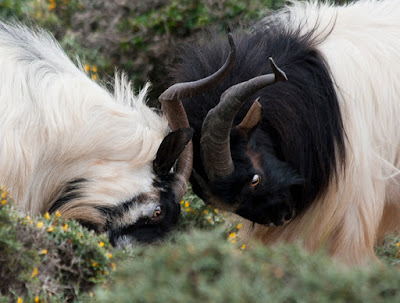 Pause for interesting fact: The chapel of Agios Ioannis, dedicated to St. John the Baptist lies isolated at the end of a hiking path about half-way down the peninsual. Every August 29, to honour the day of St. John, a pilgrimage of those named John walk to the chapel, and stay there for a day and a night.

No Johns around for us though, just goats and distant black-eared wheatears.   The sun was hiding from us behind a slightly damp cloud and every bone in my body was jarred and shaken as we rattled along never seeming to get nearer to our destination.  Several times, I said we should turn back as the track got more and more boulder strewn and dangerous but each time we agreed to just go round the next bend to see what was there.

And finally we could see the southern tip and the sea where the track, hewn into the cliffs, plummeted down dangerously to a tiny cove with some disappointing ruins! We stopped high above the cove to admire the view but no way was I continuing down to the beach. I was just wondering whether it had all been worth the effort when I turned round to see an enormous bird rise out of the deep gorge that snaked back round behind us from the cove.  Then another, and another, "BIG BIRDS" I screamed at the Bedsock as I ran for the cameras.  We grabbed a few photos as they soared  just above us, then they disappeared back where they had come from, seemingly swallowed up by the earth  a 100 metres or so from where we stood.

The photograph below shows a distant vulture cruising along the top of the gorge. It was taken with my old Canon 400D with 70-300m telephoto. Not a great picture but gives an idea of the terrain. 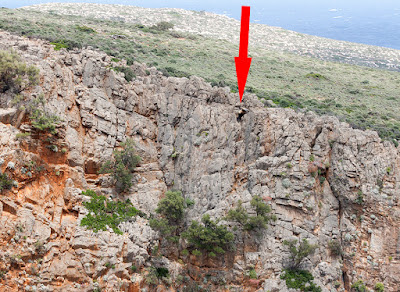 We scrambled over the rocks to a small ridge protecting us from the sheer drop into the gorge. At first we could see nothing, then sweeping my binoculars over the side directly opposite us I saw them, not eagles as I had first imagined but a colony of vultures, twelve of them, their brown feathers nearly camouflaged against the ochre walls of the gorge. 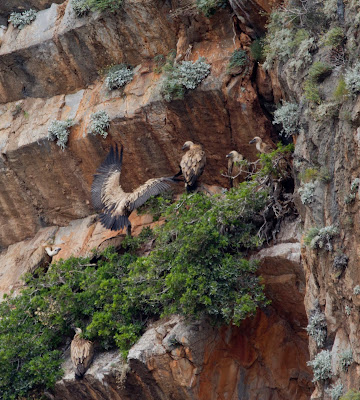 My initial disappointment that they were vultures,  not a bird with a better press, quickly vanished as they took it in turns to cruise along the sides of the gorge, up and out into the open skies before returning to the colony 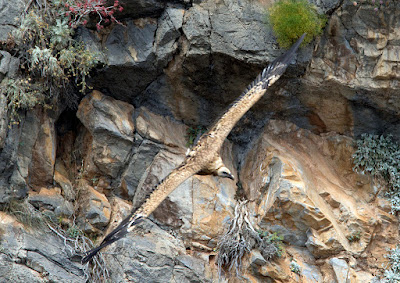 Not only were the vultures spectacular but the sides of the gorge were festooned with colourful plants, their roots clinging into crevices, their foliage and flowers tumbling downwards into the gorge like one enormous, vertical rock garden. 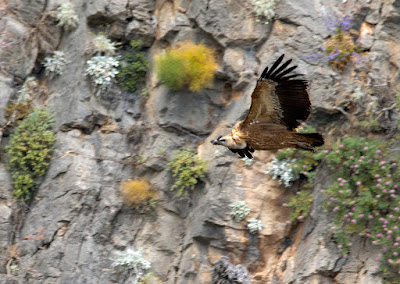 It was absolutely breathtaking. Finally the long 600m lens came into play and the tripod proved it's worth as we clicked photo after photo. A slight enlargement on the photographs and you can see their blue eyes! 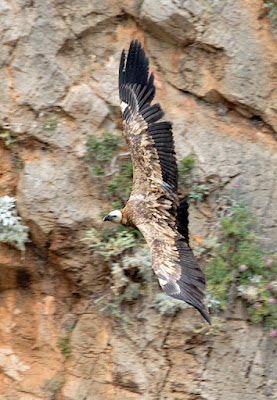 Vultures get a bad press and there is no doubt they can look a little spiteful when they are hanging around hissing and spitting at each other.  Actually the spitting is "defensive vomiting" the smell of the vom is enough to put off enemies and is corrosive enough from their acid stomachs to burn! Sometimes I feel like that after a bad Saturday night! 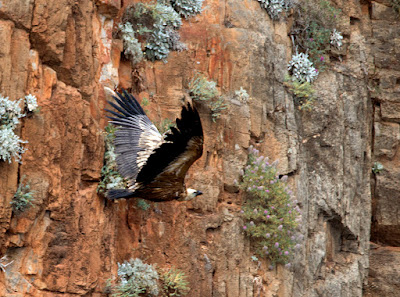 They should also be known as natures 'eco' bird.  They only eat dead meat, perhaps a tasty goat that has died on the peninsula.  They dispose of the rotting remains - natures garbage men or the ultimate clean-up team.  Whatever their dietary habits and slightly bad manners they were beautiful and awe inspiring that day.  The memory of several of them flying maybe 20ft above us, their huge wings like some magnificent Native American Indian headress, will stay with us forever.  The adrenalin rush from the experience akin to that we had had when abseiling for the first time in the Lake District.

The jolting, drive back along the peninsula seemed less onerous - we had at last had our Cretan birding experience!