..
I recently read a birders blog who noted that according to the dictionary of Urban Slang 'Owling' means, not searching out and watching owls but


"the new viral craze; a bit like planking, except you crouch down, and stare like an owl. You then take a picture and post it on facebook. Brownie points for random places to owl"

Who knew?  I suspect that is another craze that has been long gone before I even heard about it.

I doubt Ando, our wildlife guide in the Hokkaido wilderness, would have been too impressed by this definition, although after his revelation of the previous evening, that he loved The Who, Brighton and wanted to be a Mod (rather than a Rocker) it was clear he was a man of many surprises.


After breakfast we are loaded into Ando's van along with the students, and the 'Birders' who are fun company and a mine of interesting and useful information. First stop is the nearby feeding station where the red-crowned cranes are due to show up at about 11.00a.m. They don't! This is the trouble with wildlife - so flippin' unpredictable! As the cranes have refused to stick to Ando's schedule we are packed back into the van and driven along snow compacted lanes to our next stop - we have been promised a Ural owl!  And what an exquisite creature it is too, roosting in a tree that is picture perfect on its own.  Like so many things in Japan, the owl comes beautifully packaged.


But this is where the slight disappointment creeps in! Despite the general remoteness of the area, we are suddenly not alone! Another van load of people has turned up bursting into the reverent silence we and the Birders observe for our encounters with wildlife.  This is not just an owl, it's a tourist destination! Small groups at a time are allowed to clamber down the path, boots crunching deep into the snow and instructed to keep at a certain distance to photograph the owl.  The Bedsock and I are very excited by the chance of a good picture but the Birders are less happy with the experience, particularly as the other group seem more interested in chatting loudly to each other than watching the owl.  As it happens, the owl doesn't do much other than occasionally opening its eyes and glaring disdainfully at those disturbing its peace.

Ando explains that although he is a registered guide there are some who operate without license, picking up the GPS co-ordinates of the various wildlife sightings and driving (small) bus loads of tourists around them.  Worse, there is mention of some of the unregulated tourists chucking snowballs at the owls and generally being disrespectful.  We are saddened by this but aware that in terms of 'wildlife tourism' we are part of the 'problem'.  The fact is tourists bring money into areas and ultimately that helps in the conservation of wildlife.  The red-crowned cranes were hunted and eaten almost to the point of extinction before it was realised they were worth more to the area alive and dancing!

We leave the Ural owl to a bit of peace and quiet before the next visitors turn up and Ando drives us to a Sushi-go-round restaurant in Kushiro the largest town in the area, for lunch.  It's fun and cheerful, the sushi is the best ever and Ando orders some of the more unusual fish sushi for us to savour. Then onwards for cake and coffee at a rather chic cafe! We are amazed, last time we were in Japan we had some difficulty outside of the big towns finding places to lunch, and certainly not cake unless it was of the disappointing type that looks wonderful and turns out to be full of bean paste!  It's worth having a guide just to find the best local eating establishments.


The Birders are doing a similar circuit of Hokkaido to us, arriving the previous day Ando has already taken them to see owls which they had all to themselves and also white-tailed eagles. We see a very distant solitary Steller's eagle on our tour but we hadn't expected to see them here at all.  We will be travelling to Rausu on the coast the next day in the hope of seeing both eagles and the famous Blakiston Fish Owl.  The owl is supposed to be a major highlight of our holiday but the Birders tell us that when they researched it they found that fish owls only live for about 40 years and 'Blakey' was nearing that so there was a possibility that poor 'Blakey' might have carked it! As the brochure described the accommodation for viewing the fish owls as  'VERY basic' they didn't want to risk it being a no show!  Blakey's possible demise would be terrible for the Socks but even worse for the poor owners of the 'very basic' shack which Blakey has turned into a moneyspinner for them over 20 years!  We speculate that they may have nailed Blakey to a perch and be working him with strings, in a tragic copy of the Dead Parrot sketch.

Whether Blakey lives or not remains to be seen on another day, for now there is another chance to see a different pair of Ural owls snuggled together on the edge of a small woodland.


And then a stop for some beautiful landscape photography, a sighting of Hooper swans on a frozen lake in the Kushiroshitsugen National Park. 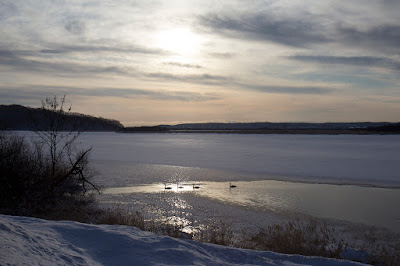 Black kites circle overhead the scene and the light are amazing. 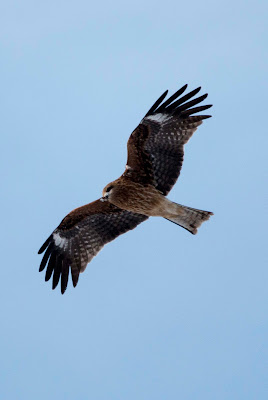 Our day out is over, the Birders go to the local onsen for a good soak in the hot spring waters but I am regrettably too exhausted for this and grab a quick pre-dinner snooze.  I can't wait to wake up and see what the next day holds... so much to see and so little time to see it in.  Will Blakey be a no-show? Will we be lucky enough to see eagles? Will we ever see the red-crowned cranes dance?  All will be revealed in the next few blogs.. I could be writing them for some time...
Posted by Arabella Sock at Saturday, March 19, 2016